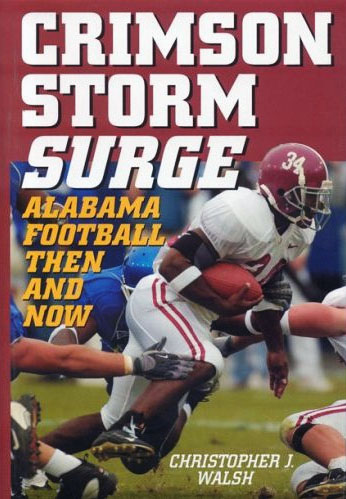 It was the dust jacket of Crimson Storm Surge that deceived me. I picked up Christopher J. Walsh’s 2005 book on Alabama football expecting a minutely reported overview of Alabama football and, indeed, that’s how it started.

For eight chapters and 64 pages that’s what I got; a brisk and entertaining sketch of the program’s history from the days of William G Little to the Crimson Tide players hoisting Gene Stallings on their backs in the Superdome. And I was happy.

I guess I should have expected it. Walsh worked for the Tuscaloosa News covering Alabama football until 2009 when we left to write for the Rivals site BamaOnLine (now part of 247sports). Crimson Storm Surge, published in 2005, focuses on the period he worked covering the team.

What he covered was a lot of the sturm und drang that descended on Tuscaloosa in the wake of the entire Albert Means case. Crimson Storm Surge goes into all of the messy details of the lawsuits and trials that spun out the NCAA investigation into Alabama.

This is what we used to call a "notebook dump" back when I worked in newspapers and Walsh carries it to the point of just reprinting his old articles verbatim. Not exactly stylish but, hey, writing books it a pain in the ass, dammit.

All of which is fine, if you are interested in rehashing a god-awful unsightly mess yet again. And you’d have to be some kind of sadist to want to do that. Be honest, do you really need to get a refresher on the specifics of how Phil Fulmer is an odious lowlife? (Although the two-page-long list of Tennessee players legal woes is still very amusing.) 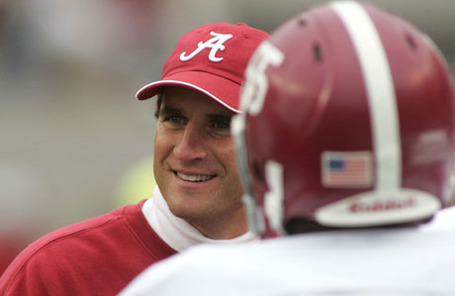 Crimson Storm Surge is much more helpful in its description of the start of Mike Shula’s tenure as Alabama’s head coach. With the arrival of Nick Saban and the program’s ensuing success it’s simple to simply write off everything that came before.

Yet Shula stepped into a very difficult situation and dealt with a host of obstacles completely beyond his control. It’s worth remembering that simply keeping the program moving forward (particularly in the realm of recruiting) was an accomplishment and Crimson Storm Surge provides a good look at the particulars of that.

The biggest problem with Crimson Storm Surge is the unpleasant frequency of inaccuracies. For many generalized books about Alabama football this isn’t an overly distressing issue but the selling point of Walsh’s effort is as factually authoritative effort. Some of these mistakes are pretty innocuous but some are not. It was Alabama assistant coach Hank Crisp that lost a hand as youth in a farm accident, not Head Coach Wallace Wade.

Still, Walsh knows his subject matter inside and out. One of the real assets of his efforts has to be the less-than-apparent connections you simply cannot find in a box score or season win-loss column.

In the end, Crimson Storm Surge doesn’t provide anything about the history of Alabama football you can’t find done much better elsewhere. But if you are looking for a good resource to understand the turmoil in the program that followed the Dubose era, particularly the legal battles that ensued following the NCAA probation, this book is a must read.

Next week: Oh, How They Played the Game