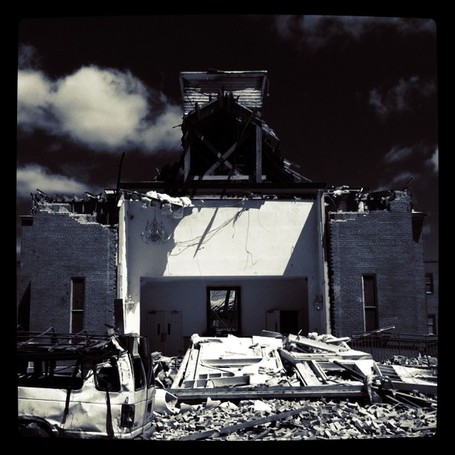 The official death toll in Alabama now stands at 210. Tuscaloosa officials report 42 deaths in the city with more than 900 injuries from Wednesday's tornado. About every official we've seen cited says those numbers are going to rise. For the next 24 to 48 hours the emphasis will still be search and rescue and, as part of that, the Alabama Emergency EMA has now deployed mutual aid teams across the state.

The University of Alabama has said two students were killed and The Crimson White is reporting at least 15 were still unaccounted for. The Crimson White has produced a very helpful list of damaged and destroyed buildings in Tuscaloosa for those of us scouring photographs to learn what places have been affected.

T-town is now under curfew and a drinking water warning. Officials still urge people to stay out of affected areas so emergency crews can do their work. Unless you are picking someone up to get them out of the disaster zone, give these guys time to do their work.

The big news today is that President Obama will be in Tuscaloosa this morning to survey the damage. Alabama has now been declared a major disaster area and FEMA is now accepting disaster recovery applications.

The story is big news now. The New York Times, The Wall Street Journal and the UK Guardian. Still, the effort done by The Tuscaloosa News' Wayne Grayson, The Birmingham News' Izzy Gould and TideSports Aaron Suttles has been excellent. If you want to know why the coverage of the Alabama Crimson Tide is so damn good, it's because there are folks like this covering the team.

One of the best resources for Tornado relief information is the website Legislative Barbie who now have a mirror site up in conjunction with UA School of Library and Information Studies. If you want to help, this is your one stop to find out how to do it. The work done by Brittany Turner, Lamont Pearson and Morgan Haley compiling this is fantastic.