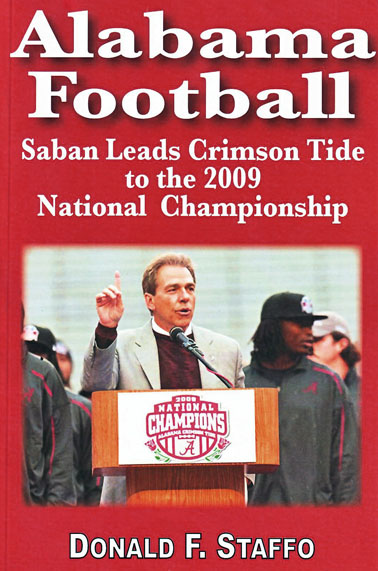 In 1992, Donald F. Staffo published his first book on Alabama Football Bama After Bear: Turmoil and Tranquility in Tuscaloosa. And the next season the Crimson Tide won the national championship.

In 2009, Staffo produced his second book on the subject Alabama Football: Stallings To Saban, A Roller Coaster Ride and, subsequently, the team claimed another national championship.

Regrettably, the publication of Staffo’s third book last year Alabama Football: Saban Leads Crimson Tide to the 2009 National Championship didn’t prove a similar herald for the team’s success. But that might be because this tome isn’t quite the same as its forbears.

Staffo’s books have traced the bumpy course travelled by the Alabama football program since Coach Paul W. Bryant announced his retirement on Dec. 15, 1982 after almost a quarter century at The Capstone. In the same span of time since, the Crimson Tide have seen no less than eight men hold the title of head coach (with only seven actually leading the team from the sideline).

The journey has not been uneventful for the team, the school and the fans. As a result, the achievements of the 2009 squad under Coach Nick Saban came as something of a relief and with a strong hope the turmoil had been put behind.

While Staffo’s previous two books ably demonstrate the problems that the program has had to overcome, Alabama Football: Saban Leads Crimson Tide to the 2009 National Championship isn’t quite the final word on the outcome.

Staffo's book has enough substance for a single chapter (maybe two) of his other works and it becomes thin gruel spread out even into a short stand-alone book. Its 54 pages aren’t a daunting prospect for the reader but the surfeit of comma splices makes it a tougher haul than one might expect.

There’s not much original insight offered, the direct quotes being culled from other sources or coming from media observers of the program. In fact there’s nothing here you won’t find in one of the well done commemorative magazines churned out in the wake of the 2010 title game (like the superb Yea Alabama National Championship Edition) and it doesn’t have all the nifty photos those other publications offer to lure you into buying.

Where it falls furthest from the mark is in providing any type of context for the events of the season. Sure there’s a listing of the individual games and a detailed description of both the SEC Championship Game and the BCS National Championship Game but little else.

There a lot of details about the 2009 campaign that cry out for inclusion. The pre-season belief that Houston Nutt’s Ole Miss squad would be the power of the SEC West, the carnival atmosphere Lane Kiffin and Ed Ogeron brought to Knoxville and the low expectations for the Plainsmen after obtaining a new head coach boasting a 5-19 record. All of these expectations proved faulty when Alabama lined up on the field against the teams in question.

Moreover, as happens in every season, there were the host of controversies that emerged over the season that deserve to be explained in full while their particulars are fresh on our minds: the Volunteers unsuccessful request to wear their home jerseys at Bryant-Denny Stadium, Patrick Peterson’s interception that was ruled out of bounds during the LSU game and the "debate" about Alabama’s ability to overcome the Longhorns if Colt McCoy hadn’t been injured.

That said, Alabama Football: Saban Leads Crimson Tide to the 2009 National Championship works mostly as an epilogue to the 27-year odyssey of Crimson Tide football that Staffo has detailed in his three works. Whatever the drawbacks of his style and approach the fact remains this is the only published account of a period of dramatic change for the program and an important starting point for anyone trying to understand what transpired during it.

Next week: Game of My Life