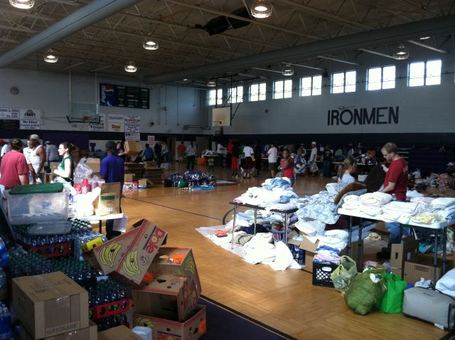 The number of people killed by the tornadoes that swept the state on April 27 remains at 236 with a total of 40 confirmed deaths in Tuscaloosa, according to Alabama EMA. Yesterday afternoon, the city released the names of the victims that have been identified and the University of Alabama officials confirmed that six of those who died were students.

It's a little difficult to grasp the sheer scale of the loss of life. This helps.

Over the weekend we saw a phenomenal effort to bring aid to those affected by last week's storms. People came out in the thousands to lend a hand. There were countless reports of people from across the region - and the country - loading up vehicles with supplies and heading to hard hit areas. Then rolling up their sleeves when they got there to help with the clean up.

The rains are slated to return today, although according to Alabama's weather guru James Spann it shouldn't arrive till this evening. So if you got tarps in the back of your truck, get 'em to where they need to go ASAP. Tomorrow will be rainy although without any type of violent storms. Still, any precipitation will only make the cleanup that more difficult so make the hours count.

In addition, two new websites have appeared that have a heap of good info, The UA Greek Relief webpage and the T-Town Tornado Relief webpage. Both have associated Twitter and Facebook pages that are required reading if you want to be involved with efforts in and around Tuscaloosa. The city has also set up Give Tuscaloosa webpage specifically to raise funds in the immediate area.

There is a lot more work to be done and people will welcome any and all volunteers - even if you can only squeeze in a few hours after work.

Lastly, at this point you have probably heard the news that Osama Bin Laden has been killed by US forces in Pakistan. His death marks the last chapter in a difficult struggle this country has grappled with for almost a decade. Today, Alabama is on the first steps of a different struggle that requires our undivided attention. Perhaps we can look at the lessons of the past - the ways we got through difficult times and relied on the support of others - to find our way forward.

But, most of all, we must thank the men and women in our armed forces who have born the brunt of the country's long undertaking for the rest of us.