Share All sharing options for: RBR Reading Room: Game of My Life 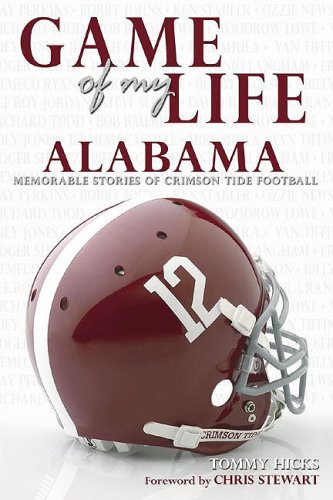 Being at a great Alabama football game gives you a sense of being part of something so much larger. At first you experience being a part of an event along with everyone else there with you and, later, a part of history. Yet as unifying as that shared experience may be for the thousands in the stands, its often quite a different sensation on the field – although no less electrifying and grand.

Tommy Hicks’ 2006 book, Game of My Life: Memorable Stories of Crimson Tide Football takes this strange paradox and runs with it. He selected 30 former Alabama players and interviewed them about one particular topic – the game of their life. The book was published by a niche publishing house that went bankrupt in 2008 so it’s not that easy to find anymore. That’s a shame because this is a very nice effort.

A big part of Game of My Life’s success is the authors understanding of how to handle the subject matter. Hicks is a longtime sports writer for the Mobile Press-Register. He knows his subject is compelling in and of itself and he seems to take pains to set out of the way and let it shine on its own.

As a result, the approach here isn’t fancy. In each chapter he gives the player’s background, sets up the season and then there are a few pages with the direct recollection from the player in question. Yet this direct approach is really what makes this book a great one to read.

The games you expect to be represented are here and accounted for; the 1993 Sugar Bowl, the 1979 Sugar Bowl and the 1946 Rose Bowl. The plays you expect are represented as well; The Kick, The Sack and The Run in the Mud. The list of players included is just about the lineup you would hope to see in an effort like this (with the interesting omission of Joe Namath). There also quite a few Iron Bowl games in the mix as well.

Yet there a few compelling exceptions; center Roger Shultz tale of his first game as a starter against Vandy in 1987, Ozzie Newsome’s recollection of his first big pass play against Florida State in 1974 and Paul Crane’s memories of taking on a tough Ole Miss squad in 1965 with an unbeaten record on the line.

Where Game of My Life becomes essential reading is through the insights the player-level perspective adds to the contests being described.

For example. Given all the acclaim Cornelius Bennett’s epic sack on Notre Dame quarterback Steve Beuerlein in 1986, you would think that Biscuit considered it a career moment. In fact, it’s quite the opposite.

"It was a big hit but I had a lot of big hits in my career," Bennett says. "I’m serious, to me it was another sack. I hit guys harder than that in practice."

In terms of the game itself, he still feels his block on the return of the fourth down punt that followed was more important. "I made a block that cleared him for a touchdown. To this day, that as a much bigger play."

Not all of the revelations in Game of My Life are so dramatically counter intuitive but just about every one adds something to the understanding of contests we’ve long thought have been explained completely. It reveals a lot of the nuance that sometimes gets lost in the grand sweep of events.

If you’ve recently read a comprehensive history of Alabama football, Game of My Life is, without a doubt, the book you should pick up next.

Next week: The Long Shadow of Coach Paul "Bear" Bryant