Not exactly what I expected on Memorial Day. The sweater vest is no more. I guess at least he didn't sucker punch some no-name Clemson linebacker, right? Per the New York Times:

Jim Tressel resigned as football coach at Ohio State on Monday, saying it was in the best interest of the university for him to step aside as it faces an N.C.A.A. investigation over Buckeyes players who sold memorabilia to a local tattoo parlor owner and Tressel failing to notify university officials when he first learned of it.

"After meeting with university officials, we agreed that it is in the best interest of Ohio State that I resign as head football coach," Tressel said in a statement released by Ohio State. "The appreciation that Ellen and I have for the Buckeye Nation is immeasurable," he continued, referring to his wife.

The resignation was first reported by The Columbus Dispatch Monday morning after it received a copy of a memo that Gordon Gee, the Ohio State president, sent to university trustees.

"I write to let you know that later this morning we will be announcing the resignation of Jim Tressel as head coach of the University’s football program," the memo read, according to The Dispatch. "As you all know, I appointed a special committee to analyze and provide advice to me regarding issues attendant to our football program. In consultation with the senior leadership of the University and the senior leadership of the Board, I have been actively reviewing the matter and have accepted Coach Tressel’s resignation."

It's largely still speculation at this point, but for now all signs point to this being a CYA strategy by Ohio State. In other words, let Tressel take the fall and hopefully spare the program major sanctions from the NCAA later on down the road. Per the Columbus Dispatch:

Ohio State football coach Jim Tressel, who met with coaches and players this morning to announce his resignation, was encouraged to resign, sources told The Dispatch today.

The Dispatch is far from the only media organization reporting to something to that effect. Sportscenter, for example, is currently leading off with the line that Tressel resigned with Ohio State "anticipating severe sanctions." With the hearing before the Committee on Infractions coming in August, the idea is that this is basically just a sacrifice to the COI Gods hoping they will be spared by the sword.

Moreover, new allegations may be on the way. Sports Illustrated is allegedly going to publish another Tressel article later this afternoon which will involve further allegations. Perhaps this is all just fluff trying to promote an article, but if so the writer of that article is milking it for all it is worth: 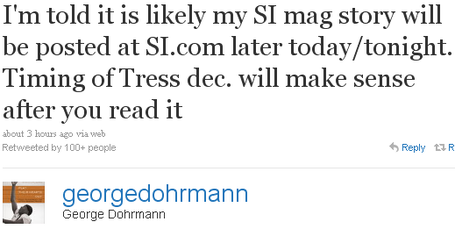 For the time being, Luke Fickell, the assistant coach who had already been selected to be the interim head coach in Tressel's five-game suspension, will now be the head coach for the entire 2011 season. Having said that, while I suppose it's theoretically possible that he could be given the job if he has a very successful debut campaign, Ohio State is big-time football that can draw a big-time coach, and after all of this the Buckeyes will almost certainly be looking to go in a new different.

In other words, get ready for months and months of speculation as to who the next Ohio State head coach will be. Urban Meyer's name will be mentioned countless times, and I suppose it's possible he may end up a Buckeye. Regardless, though, again, Ohio State is big-time football, and unless it becomes clear that the NCAA is poised to deliver a significant blow, they won't be hiring the second coming of Mike Shula. They'll attract a top-flight coach and if they get that coach from an existing program -- i.e. not Urban Meyer -- that will set off a large chain reaction that will be felt throughout the college football world.

For 2011, though, Ohio State is still probably the most talented team in the Big Ten and in terms of depth they are far and above the rest of the conference. Nevertheless, the coaching turnover will not be easy, the turmoil has to have an effect, and the lack of experience for several games at the quarterback position will be a problem. As I've said before oddities and strange occurrences can often be the rule and not the exception, but for the time being it's hard to see Ohio State being a serious contender for the national championship this season. With their talent and depth and the overall weakness of the Big Ten they will remain a serious contender for the conference championship, but at this point it would be a major surprise if they can find their way back to New Orleans.

Update: Does "Ohio State Buckeyes" translate in Russian to "chickenshit to the end"? 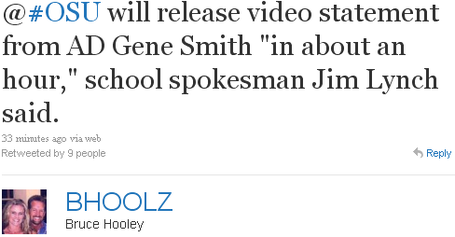 Too coward to even face questions from the media. Pathetic.

Update II: The Sports Illustrated article has finally been released. Nothing overly damning and nothing on the ongoing investigation into Terrelle Pryor, but additional fuel to the fire nevertheless. Money quotes (emphasis mine):

That support crumbled suddenly over Memorial Day weekend. Tressel was forced out three days after Sports Illustrated alerted Ohio State officials that the wrongdoing by Tressel's players was far more widespread than had been reported. SI learned that the memorabilia-for-tattoos violations actually stretched back to 2002, Tressel's second season at Ohio State, and involved at least 28 players -- 22 more than the university has acknowledged. Those numbers include, beyond the six suspended players, an additional nine current players as well as nine former players whose alleged wrongdoing might fall within the NCAA's four-year statute of limitations on violations.

Ellis showed SI pictures of players -- Pryor, Gibson, Herron and Solomon Thomas -- being tattooed or showing off their artwork. Rife appears in one photo with a player. Ellis also produced a photo of 11 plastic bags filled with what appears to be marijuana; he says the photo was taken at Fine Line Ink. The letter the DOJ sent to Ohio State in December stated, "There is no allegation that any of these players were involved in or had knowledge of Mr. Rife's drug trafficking activities." Ellis says that is true but that he did witness four other Buckeyes trade memorabilia for weed. Three of those transactions involved a small amount of the drug, he says, but in one instance a player departed with what Ellis was told was a pound. (Rife's lawyer denies that his client provided marijuana to any players.)