Share All sharing options for: The College Football Coach's Conundrum

This week has witnessed one of the most dramatic career flameouts in college football history. The resignation of Ohio State's Jim Tressel is, in its own way, as shocking and disturbing to behold as Woody Hayes punching Charlie Bauman in the throat in 1978. Depicting them as morally equivalent is tempting but dangerously misguided.

Hayes was felled by a transgression of his personal behavior. His fall was his and his alone. Tressel's conduct, while clearly reprehensible, was the result of a larger ethical problem. His abysmal choices at pretty much every step in the case makes it tempting to oversimplify the situation. There are rules. He broke them. Then he tried to hide breaking them. Therefore he deserves punishment. What could be more straightforward than that?

Quite a bit, actually. Tressel might be an outlier but to insist his situation is different from any other coach at a major college program is to miss the point entirely. The decisions he made on how to run the OSU program are the same ones made by every coach in America and that he chose unwisely doesn't mean the peril doesn't exist for any of the others.

(And just to be clear, this isn't a defense of nor an attack on Tressel. It's an attempt to understand something about the situation that led to his "retirement" from OSU.)

Sports Illustrated's Andy Staples made the assertion on twitter that every college coach operates in a grey area. The difference he argues, "is a matter of degree." This is very much true although the moral component toward the existence of a grey area itself overwhelms the basic point. College football, by its very nature, involves a compromise of values. For some, this is grounds to eliminate the game entirely, for others who believe the sport is worth the difficulty of wrestling with this conundrum, it’s a starting point.

The recipe for success in college football is pretty simple. The better the players you have, the more likely your chances of winning. Since his humble start as SMQ, Dr. Saturday has been running the numbers on this and finds there is a direct relation between the quality of recruits and overall win percentage. A big reason Alabama has seen such an uptick in on-the-field success since Coach Saban arrived can be tied to the improvement on the recruiting trail.

The problem is there are only so many high quality players out there and the market for them is unnaturally regulated since it's in the academic environment. The standard of amateurism limits the player's ability to be compensated for their primary asset - their athletic skills. That creates a black market which is trafficked by the most distasteful elements of the sport. All the hot-button issues that plague college football - such as rogue boosters and unscrupulous agents - emerge from this conflict.

Above the waterline are the restrictions placed on the sport to limit these excesses. Almost every NCAA rule exists - in theory anyway - to limit exploitation of the amateur athlete. Since these players cannot be rewarded by their true market value there is constant tension between the regulations that exist and the necessity of having them on the field to compete in order to win.

Yet, coaches at the big schools are paid a premium price to produce those wins. Their continued employment hangs on their ability to provide them. The higher profile the coach, the greater the pressure to win. And that puts them athwart this difficult conundrum. The situation is roughly expressed like so: 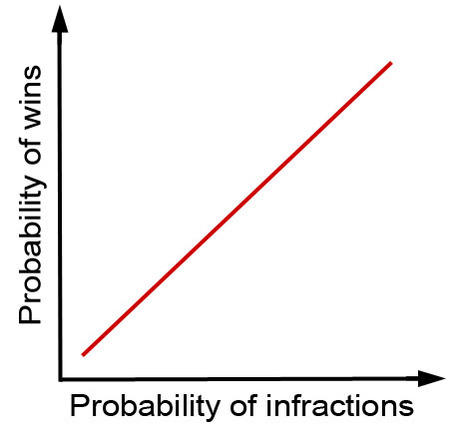 The more you push the boundaries on the rules the better the chances at winning. The safer you play it in terms of personnel, the less likely you'll have double digits in the W column at the end of the season. (Neither, I must add, are a sure thing. You can cheat a thousand times every day but never capitalize on the advantage. The point is you are trying to improve the odds which are already long to begin with.)

Every big time college coach looks long and hard at that formula and figures out the range of it he's comfortable to fall within. That's a tricky problem since you never know if the wins are sure enough to keep your employer happy nor when the hammer of sanctions by the NCAA will fall. If you are at, say, Vanderbilt you stick staunchly to the far left and stay home in bowl season sleeping the sleep of the righteous. At OSU where the demands for wins is much more adamant, Tressel chose to go exceedingly far to the right. Eventually he fell off.

So let's say a coach made his decision on where he felt he was comfortable on the curve. To wit: 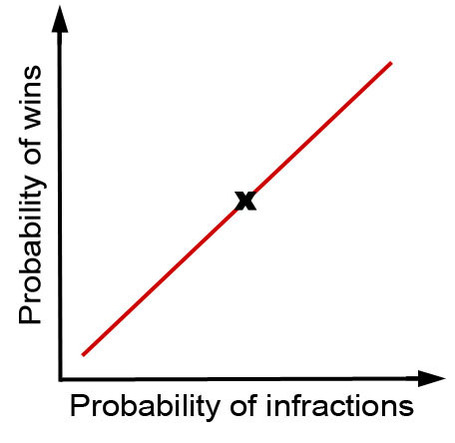 Now there are options available to coaches in order to swing the odds in their favor. A change in strategy, for example, can push the curve itself higher on the chart increasing the possibility of winning while not incurring a greater chance of infractions.For the most part these strategies are what are considered legal.

So let's say you are stuck with a limited amount of players and you don't get creative in recruiting superstars, you might find an offensive scheme that increases their chances of wining. As you see depicted here (where the pink line indicates the initial curve): 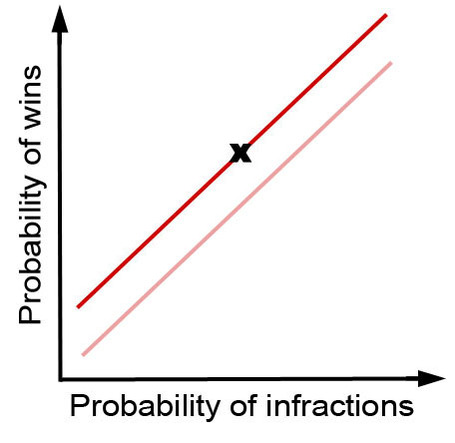 The problem is these changes are much less reliable than simply adding better players and even if they are effective, eventually the curve will return to it's natural position. Other schools will see the success and replicate it, muting the ability of the originator to continue to capitalize on it. The spread is a good example of this phenomena.

(The contrast is the penalties placed on a team by the NCAA for violating the rules. The loss of scholarships limits the available talent while more vigilant oversight holds the team to a point further on the left of the curve. The probability of wins suffers dramatically.)

This is one reason the oversigning debate seems so ludicrous to SEC fans. The various practices that fall under this hazy definition seek to maximize the amount of talent a team can utilize while remaining within the limitation of the regulations. Insisting a coach taking an ethical stand by willingly abandoning a legal practice means throwing away a competitive edge against the other teams he faces. His paycheck and the conditions that accompany it make it an unrealistic demand. Object to the situation? Then change the rule and level the playing field.

The size of compliance departments has ballooned in recent years not because there is a greater amount of rule breaking going on but due to the fact oversight has become that much more rigorous. It has never been easy to hide infractions but now it's almost impossible. Compliance assures that excesses can be constrained but also, possible infractions are identified ahead of time and addressed. The better your compliance department the more confident you feel for your placement on the curve. Still are student athletes any better off with the growing bureaucracy it represents?

Of course there is a long standing argument that this entire scenario is a case for the elimination of the sport as a whole. If it creates an environment that is irreconcilable with the academic institutions which foster it. The popularity of the game and the financial rewards institutions incur from it make that possibility a remote one.

The demise of Tressel won't bring about a dramatic change of this situation either. Things might change at OSU like they currently are at USC and have happened at Alabama. At best it might ignite a round of wider reforms that occur every so often in the sport. No matter how robust those efforts, they cannot eliminate the tension that exists between the baseline goal of winning and the restrictions abiding by the rules put in place to preserve amateurism. We will have another great scandal and subsequent outpouring of moral indignation like we've seen this week. Count on it. It's part of the game.