The Sunshine Express in California

Share All sharing options for: The Sunshine Express in California

The first leg of this grand adventure we're calling the Roll Bama Roll/Well That's Cool Sunshine Express was a quick hop by plane to Los Angeles from Phoenix. I arrived at Burbank Airport which I love because you can still disembark from the plane the old school way - from the back exit down the ladder.

My ride, Chris, was waiting right outside the doors with sign that said Roll Tide. We didn't really need the sign, to be honest. We then drove into downtown where I had reserved the truck. The place really hadn't changed much since i last saw it. 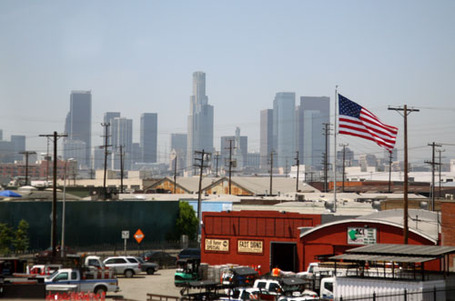 I picked the location because it was the cheapest I could find. I was a little surprised to see it was directly adjacent to the USC campus. I had to stifle an urge to moon the place from the highway on the off chance Lane was looking out a window. I didn't think Chris would appreciate ham marks on the glass of his truck.

We got to the Penske place and got set up for the truck. It was even bigger than I thought and twice as imposing from the drivers seat. One of the guys offered to roll it out the garage for us. I gratefully accepted. While I asked another guy some info about the truck, Chris started talking to his buddy about who we were and what we were doing. The next thing I know all the drivers were out in the garage shaking my hand.

I got one of them to get me directions to the drop off and then hopped in and tried to wrestle the beast onto the road. Chris later told me that the entire staff came out onto the sidewalk and cheered as I drove away. I missed this as I was busy trying to avoid putting the bumper of the truck into the side of any parked cars.

Somehow I made it through the terror of Los Angeles traffic to our meeting point in Woodland Hills. I rolled up to a house with a ton of boxes strewn across the driveway and knew I had found the place. 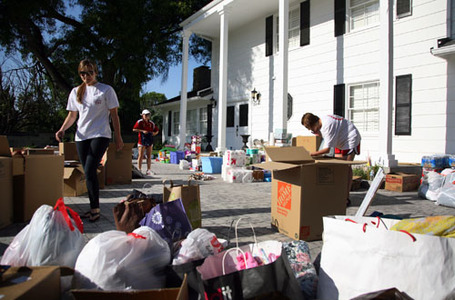 Ashli Wolf had organized efforts in California and, when I arrived was hard at work sorting the goods that had come in thus far. She was soon joined by Nancy Minkler, Kristen Blumberg and, by the end of the evening, a good half-dozen others who labored over all the goods trying to get them in a semblance of order for delivery.

By the end of the day they would have whipped up their own facebook page California for Alabama to provide information on their efforts to provide relief to the victims of the tornadoes.

I got to work trying to sort out things with the truck and, before long, folks started stopping by with last minute donations for the cause. We had people from Victorville and San Diego (for non SoCal folks, that means they came a damn long way) stop by to unload items and, if they could, spend a few minutes helping with the effort to get the stuff ready.

The mood of the enterprise was surprising like a gameday tailgate in Tuscaloosa. Everyone was that nice kind of busy where you are doing stuff but not so busy you can't chat and socialize. The

Two of the guys who write for Tosh.0 and informed us that their goods had been lovingly caressed by no less than James Van Der Beek. They later produced photographic evidence to back it up. 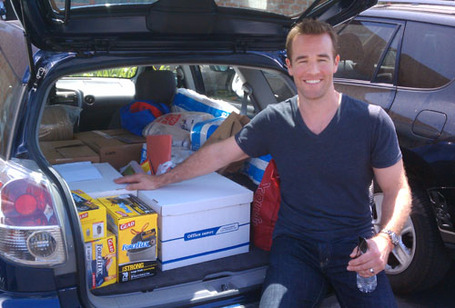 So we've got that going for us.

One of the volunteers had made a heap of calls to local media and, lo and behold, a TV truck rolled up to the residence around 8:30 p.m. It was the folks from KTTV Fox 11/KCOP My13 who wanted to do a report for their 10 p.m. broadcast. The reporter was Hal Eisner who was immediately besieged by a horde of folks trying to explain what was going on while all the kids were begging to be on television.

Progress slowed considerably with the news folks there but eventually it got sorted out as we kicked the loading into high gear. By the time the report was put together and run during the newscast, we had the bulk of the boxes on the truck. The next step was getting the remainder of the stuff on the driveway packed somehow so it wasn't just piled into the truck. Nancy insisted the bags were breeding while we weren't looking. The next hour was crunch time.

Even after getting the bulk of the stuff boxed and on the truck it still took quite a bit of time to collect all the loose items and get them stowed away. All told, we filled almost half the truck. We didn't get done until well after midnight and I didn't get to sleep until at least 1 a.m. Wake up was 5 a.m. since the station wanted to feature the effort on Good Day LA's morning news show. By the time I got back to the truck Phil Shuman and his crew were set up and ready to go. 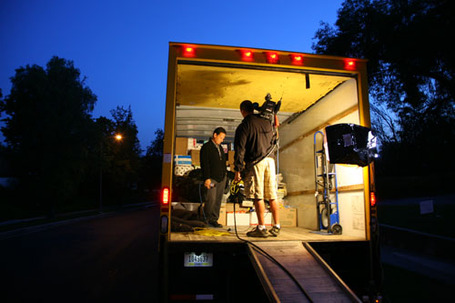 I wanted to get going pretty early but they asked if it was possible to hold off so they could get the story on their 8 a.m. report - which gets the most viewers during the entire span of the show. That reaches a heck of a lot of people so we put off heading out till 8:30. After a few "Roll Tide's!" I rolled out of Woodland Hills onto the sprawling horror of Southern California traffic. It was about as bad as I expected. 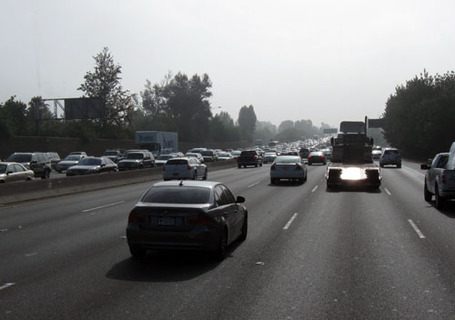 I made abysmal time at first and then got delayed a little longer when I made a detour in Pasadena to visti the Rose Bowl stadium. Alabama football was built on teams making this trip the other direction, so it was almost obligatory to stop and pay proper respects before heading to T-town.

After that, it had gotten late enough in the morning that I could make decent progress. I barreled into the Inland Empire and the metropolitan milieu gave way to the scorching desert landscape. I used to work out in this area about a decade ago so this was all pretty familiar to me. I knew EXACTLY where I planned to have lunch. 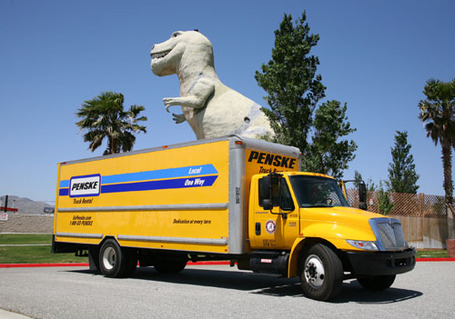 The lack of sleep and the heat of the desert got pretty bad past Indio. This is a spot where you have to take a long incline into the high desert so running the air conditioning isn't the best idea in the world for a huge truck. By the time I got to to the top my eyes felt like they were being lubricated with battery acid.

If you want an idea what it felt like take this photo and print it out... 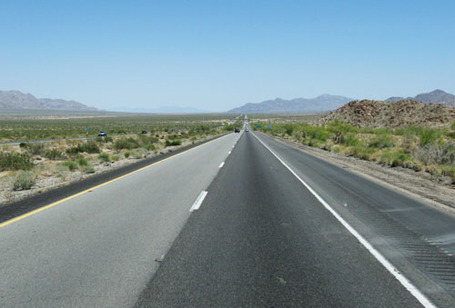 Then turn your oven on 500 degrees. When it reaches temperature, crawl in, look at the image and you pretty much have it.

Yet, there was a reward at the end of this ascent. I pulled off at Chiriaco Summit to see the General George S. Patton museum. There were a passel of older folks enjoying the air conditioning as a few stalwarts were wandering through the outside exhibit of World War II era tanks and artillery. I made a beeline for the gee-gaw stand and discovered this transplendent offering. 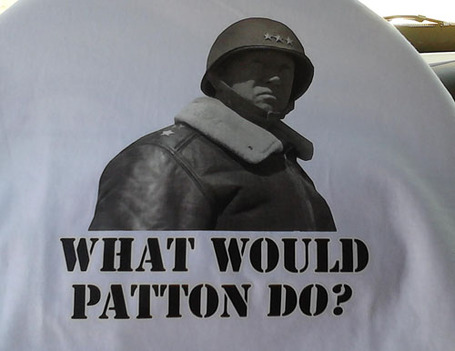 I've seen a lot of t-shirts in my time and I've seen a pretty fair share of awesome in that same span, but rarely have the two been so astonishingly wedded for the greater good of humanity. The museum had a single shirt left and it just happened to be my size. Coincidence? I think not.

I rolled into Phoenix a bit late having messed up the time change from California to Arizona (there wasn't one). The Arizona alumni group was there and didn't seem daunted in the least by my tardiness. They had most of the stuff ready to go so it was really a matter of off-loading the loose items, loading the boxes and then putting the bagged goods in the rear.

It took about an hour and went really smoothly. A day into this odyssey and I already seem to be falling into a routine for how each stop has to proceed. We got it loaded and I took of to the house to get ready for the next big part of this adventure... the run to Dallas.