RBR Reading Room: Oh, How They Played the Game

Share All sharing options for: RBR Reading Room: Oh, How They Played the Game 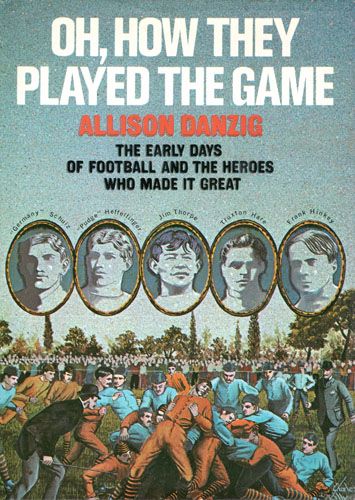 The sheer number of transformations that have occurred to the game of football over the last 141 years makes it seem an alien contest when held in comparison to the modern version. Even worse, our perception of the early era of football is marred as much by its bungled recounting as it is by the sheer distance of time.

A superb antidote to those difficulties can be found in the works of New York Times sportswriter Allison Danzig, particularly his 1972 book Oh, How They Played The Game: The Early Days of Football And The Heroes Who Made It Great.

Danzig, who wrote for the Times from 1923 to 1968, was a renowned for his coverage of tennis but became a key chronicler of football with, is epic and encyclopedic effort in 1956 The History of American Football: Its Great Teams Players And Coaches. Yet the sheer volume of data in that work makes it rough sledding for the casual reader.

Oh, How they Played the Game is a much different enterprise. Danzig cherry picks the history of the sport looking to highlight the key coaches, players and contests that defined it during its first half-century or so.

The hobgoblin of histories of the sport is almost inevitably the author of the tome itself. The urge to embellish the events at hand is almost inevitably matched by the temptation to fill the prose with excessive stylistic touches. More than a few compelling narratives about the early days of the sport have floundered in these literary waters but Danzig’s navigation is straight and true.

The success of Oh, How They Played The Game is almost wholly due to the inspired approach Danzig takes to writing the book – he stands almost completely aside. Instead, he has culled the interviews, stories and recollections of the actual participants and observers of the events in question. Through shrewd editing the narrative that emerges is that told by the subjects of the work itself.

The recollections of Walter Camp, Amos Alonzo Stagg and John Heisman are juxtaposed with chapters on epic games such as the 1913 Army vs. Notre Dame contest credited with popularizing the forward pass, the oft-forgotten inaugural Rose Bowl contest between Michigan and Stanford in 1902 and Centre College’s dramatic upset of Harvard in 1921.

The book also looks at the point-a-minute squads under Fielding Yost at Michigan, the "four horsemen" coached by Knute Rockne at Notre Dame and "Pop" Warner’s teams at Carlisle Indian School that boasted the great Jim Thorpe. 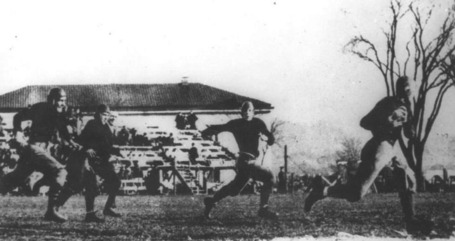 Knute Rockne rolls to a touchdown against Army in 1913.

The greatest upshot of Danzig’s approach is that it never succumbs to the type of fandom for one squad or another that is achingly distasteful for anyone who isn’t among that particular group.

If Knute Rockne wants to discuss why he felt an affinity for Notre Dame, I can live with that. But if the author also wants to beat me over the head with it as well, I’ve got better things to do with my time. Like read more books by Allison Danzig.

Where Oh, How They Played the Game does its greatest service to the modern reader is introducing in great detail lesser known players and coaches from these eras.

While names like Jim Thorpe and Red Grange carry a certain familiarity today there’s often just a limited understanding of what their achievements on the gridiron actually encompassed. And players like Frank Hinkey, Adolph Schultz and Hamilton Fish are almost completely forgotten outside of the fanbase of the schools they played for.

Even more revealing are the playing days and early coaching efforts of coaches who went on to become legends of their own including men like USC’s Howard Jones, Vanderbilt’s Dan McGugin and Alabama’s Frank Thomas. The coaching trees of the men on the sidelines today that we trace with such detail can be traced back through these legendary leaders to the originators of the sport.

The one gripe I have about the book is that it finds space for a chapter on Tennessee's General Neyland but has nothing on Wallace Wade or Frank Thomas. But that's partisan nitpicking and I know it.

For any real aficionado of football Oh, How They Played The Game is a superb book to read. It makes it possible to actually step back and look at the early game on its own terms. And once that’s been accomplished, the ways it applies to the modern game stand out in bold relief.