Share All sharing options for: RBR Reading Room: Where Football Is King 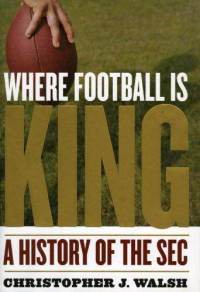 There’s a certain willful myopia that comes with being a die-hard fan of a particular program. While you know every event and person involved with your program going back decades, coming up with the name for, say, an assistant coach at a rival school is not likely. And outside of the head-to-head matchups with your team, a familiarity with all but the most notable (and recent) games played by your conference foes is unlikely.

Which is a bit of a problem for two reasons. The first is that the fate of your program is very intimately tied up in the fortunes of your fellow conference teams. The second is that the internet has made a broad and detailed knowledge of the rest of the field a downright necessity.

The good news is that there is an extremely handy remedy for this, Christopher Walsh’s 2006 book, Where Football Is King: A History of the SEC. This sharp lookin' little book is a superb go-to guide to all the basics of those teams you really only care about one week out of the year.

Walsh is a former Alabama football beat reporter for the Tuscaloosa News up till 2009 when he jumped ship for the Rivals site BamaOnLine (now part of 247sports). He starts this book with a boring notebook dump of factoids and whatnot singing the praises of the conference and all its bizarre splendor. Feel free to skip this chapter and go directly to the history of the conference which is extremely interesting.

Walsh really hits his stride when it comes to providing a very good synopsis of the not-exactly straightforward process that gave the world the Southeastern Conference. After that Where Football Is King gives you twelve chapters devoted to each team in the conference. These start with a breakdown on the basics current as of the book’s publication in 2006 followed by a history of the football program itself.

As you might expect, these descriptions are done with a pretty broad brush when it comes to the early years of but get a lot more detailed when describing the past quarter-century or so. This is fine, since these are penned more as reference guides for the great unwashed rather than any kind of authoritative account for the faithful.

You will find tons of interesting info in Where Football Is King. Stuff like which coach neutered a bull on the practice field to inspire his team? (Jackie Sherill, Mississipi State) Who was the first team to fly together to a game? (Ole Miss in 1937) When did LSU play the first of its now traditional night games? (Oct. 3, 1931)

Walsh also has a keen eye for good quotes and litters the narrative with them. The selection of zingers provided by Steve Spurrier are worth the price of the thing but when you add on the host of great Lou Holtz lines it’s a hell of a fun read. There’s even an extra section of great quotes he couldn’t find a way to fit in the main body of the book itself.

Like in his book on Alabama football, Crimson Storm Surge, Walsh takes the opportunity offered by recounting the history of the conference to go into detail about the events he covered at the newspaper. While it’s only a few extra pages in Where Football Is King rather than a whole freaking section in the other book it still gets a little tiresome. Luckily, the way this book is structured makes that only a minor irritation.

The other troubling issue are the inexplicable errors. He once again identifies Alabama coach Wallace Wade as having one hand instead of Hank Crisp. It’s not like its that tough to fact check. Yes, it’s only one mistake but it’s glaring enough that you have to question the veracity of the rest of the data. This book is certainly fine for plain reading it but be sure to double check if you are relying on it for any research.

The biggest problem with Where Football Is King has to be the lack of an index to track down specific bits of data. This book is best used as an information resource and not having an easy way to scour through it for specific data is a serious limitation.

Bottom line, if you like SEC Football this is a book you really need to have and be familiar with.

Next week: Turning of the Tide