Share All sharing options for: RBR Reading Room: Turning of the Tide 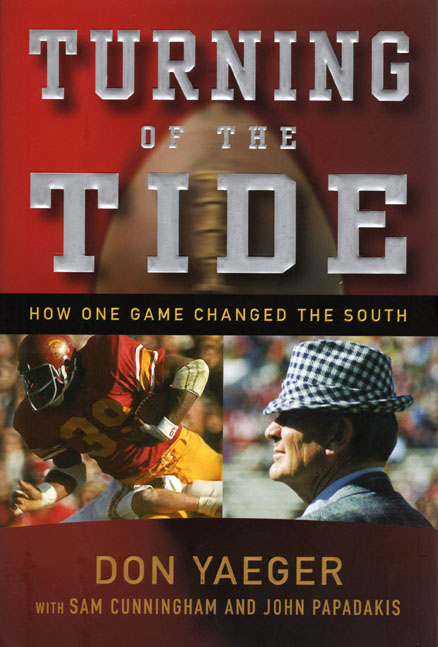 USC running back Sam Cunningham’s standout performance in the 1970 season opener against Alabama has become the stuff of legend. More than four decades on, the significance of the 42-21 victory by the Trojans has swelled immeasurably and the misconceptions surrounding it have blossomed apace.

Today it’s tough work hacking through the thickets of preconceptions and myth to discern the facts of what happened that Sept. 12 afternoon in Birmingham. Don Yaeger’s 2006 book, Turning of the Tide: How One Game Changed the South is the most recent effort to set the record straight and, to its credit, has done an impressive job of clearing the underbrush.

Cunningham’s 135-yard, two touchdown performance has come to signify the point when the previous situation of race relations in Alabama – and the south as a whole – was set aside for a new and more enlightened state of affairs. The famous adage oft attributed to Jerry Claiborne is that the black running back's ability to surmount the Crimson Tide’s all-white defense on grass of Legion Field that day "did more to integrate Alabama in 60 minutes than Martin Luther King did in 20 years."

The provenance of the quote, as well as many other incidents and comments that allegedly occurred that day have proven remarkably difficult to ascertain. The symbolism of the event has become so powerful separating fact and fiction across the gulf of time may never be completely possible. Turning the Tide makes a solid attempt, delving deeply into the substantial details surrounding the game yet, like the other tomes that try to tackle this topic, it seems to come up short.

While Turning the Tide starts out with the tone that threatens to veer off into tedious sermonizing it really hits its stride when it comes to painting the backdrop of the contest both in terms of both the Alabama and Southern California programs. It precisely paints the individuals who were directly affected by the contest as well as the broader social context it occurred in. From there the book becomes an engrossing examination of just about every aspect of the game, it's participants and the wider public who witnessed it.

From that point things get stickier. Once the book starts to grapple with the motivations of the people directly involved in the drama and the particulars of what may or may not have occurred that day, Turning the Tide finds itself on shakier ground.

Part of the problem are the complexity of the questions it is proposes to answer: Did Coach Paul W. Bryant schedule the game to build support for his existing plans to integrate the program? Did Bryant really bring Cunningham to the Alabama locker room after the game and say, "This is what a real football player looks like?" Was Cunningham’s performance a direct catalyst for changes that rapidly followed or did it come to represent a longer processes of transformation that was completely independent of that happened to peak at the same time?

Instead of making a case one way or the other for these many vexing questions, Turning the Tide makes an effort to follow all the lines of inquiry and let the reader decide. In this respect, it makes a far greater case for the overall importance of the events than lobbying for any single resolution. That's a strength of the book but the manner it lays out the evidence certainly indicates its bias to the answers. 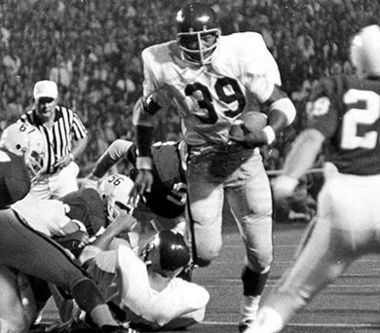 It's hard to separate the myth from the fact about
Sam Cunningham's big night in Birmingham.

Yeager is scrupulously fair in his accounts of Alabama’s efforts to integrate athletics and but also explicitly clear in the assessment of how the inability to do so was seen beyond the borders of the state. Although it is never precisely formulated, this disjunct is a key reason for the confusions that surround the game today.

Turning the Tide offers a detailed look at the actual state of integration in the Alabama program including the presence of Wilbur Jackson on the freshman team and the efforts to snare John Mitchell from under the nose of USC.

The book also mentions regularly overlooked incidents that were part of the background of the game such as the 1955 riots that occurred when Autherine Lucy was admitted into the school as well as controversy surrounding the 1959 Liberty Bowl that had saw Alabama face an integrated Penn State squad.

Moreover, Turning the Tide takes time to show how racial tensions also were a struggle for the USC team, something almost always overlooked in accounts of the contest. It is interesting that the book seems to overlook the economic disparity that might have further fueled the divisions that emerged surrounding the contest. The 1960s saw California emerge as one of the country’s primary economic powerhouses while Alabama and much of the south still languished far behind in just about every statistical category.

The West Coast’s unpleasant sense of entitlement that prompted Stanford backers to throw change on the field in the 1934 Rose Bowl to divert the poor Alabama players was certainly alive and well in the early 1970s. The nauseating tendency of the Los Angeles Times columnist Jim Murray to use the contest to drape his columns with moral rectitude certainly created a precedent taken up with vigor by his successor, the nigh-unreadable Bill Plaschke.

In the end, Turning the Tide shows that coming up with a clear and precise answer as to what exactly happened that fall day in Birmingham may be asking a bit much of a sport that tends to appeal to strong emotions and definitive outcomes. Yet Yeager's effort clearly shows there is a substantial reward in undertaking the effort to grapple with these controversies given the importance of what was - and is - at stake.

Next week: Career in Crisis