Share All sharing options for: Go Forth and Consume: Yea Alab....err, Crimson Tide Kickoff 2011 is Here! 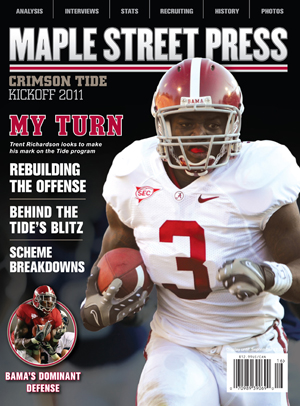 Maple Street Press Crimson Tide Kickoff 2011 is done, and it's spectacular! 128 pages of exclusive Alabama analysis, commentary, and history, all lovingly crafted by your beloved blog overlords for you. Table of contents? Why not!

Back on Track: The Tide Returns One of The Most Experienced Teams in the SEC in 2011 by Todd Jones

Know Thine Enemy: A Team-by-Team Breakdown of the 2011 Schedule by Doug Gillett

Beyond the Box Score: Alabama's Dismantling of Michigan State in the Capital One Bowl by Bill Connelly

Time for Change: New Faces in the Alabama Program by Todd Jones

Statistical Bias: A Look at the 2010 Stats, and What to Expect in 2011 by Bill Connelly

Disguising the Blitz: The Tide's 3-4 Defense by Todd Jones

Crimson Pipeline: Under Nick Saban's Watch, Alabama Has Become a Breeding Ground for the NFL by Todd Jones

"You Have to Have The Right Player": An Interview with ESPN/Scout's Tom Luginbill by Todd Jones

Bart Starr: The Forgotten Legend of Alabama by C.J. Schexnayder

"You Better Pass": Marty Lyons is the Latest Alum To Roll Into the College Football Hall of Fame by Todd Jones

Liberty Mutual: How the 1959 Liberty Bowl Led The Tide Down the Path Toward Integration by C.J. Schexnayder

Roll Tide: Through Good Times and Bad, The Tuscaloosa Community Continues to Lean on Alabama Football by Joel Gamble