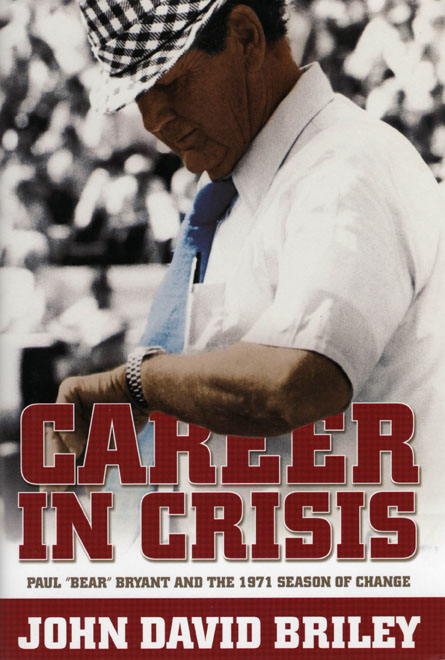 And the low water mark between them was low indeed. In 1970, Alabama finished the season with a .525 win percentage; the worst in Coach Bryant’s entire career save for his inaugural 1-9 season at Texas A&M. It also saw the infamous loss against USC at Legion Field that has come to be credited with sweeping away the last vestiges of segregation that continued to hold sway in southern football.

It is the following season, 1971, that holds center stage in John David Briley’s book Career in Crisis.

Arriving in 1958 Coach Bryant reinvigorated the program and then oversaw a period of dominance in the mid-60s that gave the fanbase expectation of excellence that became harder and harder to meet. As the decade waned his teams first found themselves falling short of the now-expected championships before sliding into an unpleasant mediocrity.

After 13 years at the Capstone it looked as if the legendary coach had taken the Crimson Tide full circle. The loss to USC on Sept. 13, 1970 and is now widely seen as a key moment in the integration of southern football. Quite a few books have gone into great detail on that score. Yet that game gave Coach Bryant a unique opportunity to transform his program once again and he didn't hesitate to take advantage of it.

Career in Crisis details how Coach Bryant looked long and hard at himself and made some decisions to change the prior tenets of his approach. This included accelerating the integration of the football program and embracing an entirely new offensive approach, the wishbone. The bottom line being that winning was worth the sacrifice.

The book is a testament to how Coach Bryant dared to re-invent himself and start anew instead of stubbornly trying to make his prior tried-and-true methods work. In this respect, the book is almost a companion volume to Tom Stoddard's book on Coach Bryant's first season in Tuscaloosa, Turnaround. In fact, the two tomes are not dissimilar in their approach.

Briley, a former student athletic trainer at Alabama during the time Coach Bryant’s presided over the football program, takes a concerted look at the entire season starting during spring practice and following it through the disappointing loss to Nebraska in the 1972 Orange Bowl. It’s a compelling odyssey of a team learning how to be winners and daring to aspire to be champions. 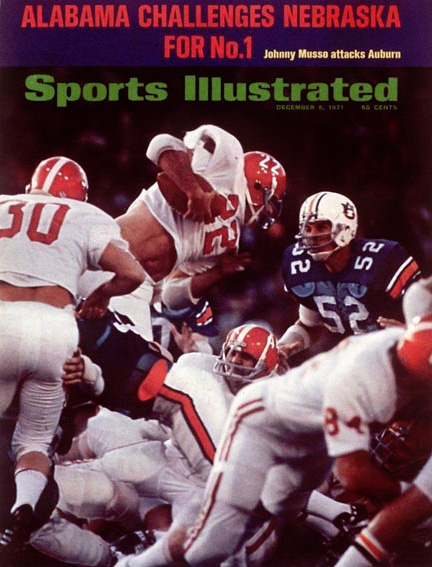 One thing that struck me after reading Career in Crisis was how much the 1971 season had in common with 2008. A talented but unheralded Alabama team started the season with a dominant win against a nationally-ranked rival and carried the momentum through an undefeated regular season to a disappointing loss in the post season.

At the beginning of Career in Crisis, Briley takes considerable time outlining the particulars of the lawsuit brought against Coach Bryant and the school by the UA Afro-American Student Association. The group charged that the efforts to recruit black players and offer them scholarships for the football team were not conducted with the same diligence as the efforts to land white athletes.

While the efforts to lay out the particulars of the integration issue are laudable the overall tone is somewhat apologist. Briley eventually concludes that the issue was an ancillary to the business of football, which feels like an insufficient answer given the fact he felt compelled to address it in such detail to start with.

Yet the fact remains, when John Mitchell took the field against USC in the season opener the color barrier at Alabama finally fell. The defeat of the Trojan's in Memorial Coliseum that day was the first of a string of achievements by the 1971 squad that culminated in a victory in one of the highest-stakes Iron Bowl ever played.

It is in recounting this weekly progression that Career in Crisis is the most successful. The efforts to make a grand statement on the issue of race on southern sports or a penetrating analysis of how the wishbone transformed the program’s on-the-field attack seem painfully forced and irritatingly apologetic.

Every season is a journey where every event seems to follow an inescapable logic as we experience them. Each game presents a particular challenge and the way those are met set the stage for the next contest on the schedule. Yet, when we look back we tend to cleave to specific games and particular moments rather than the whole of the thing.

Sometimes it's important to step back and look at the forest to better appreciate how magnificent the trees really were. Despite it's flaws, Career in Crisis is an excellent book for appreciating a watershed year in Coach Bryant's tenure at The Capstone as well as Alabama football itself.

Next week: The Crimson Tide