Alabama By the Numbers: Penalties

Share All sharing options for: Alabama By the Numbers: Penalties

Few things in a football game are more frustrating than watching your team kill itself with needless penalties. Not only do you watch precious yardage evaporate for no reason whatsoever but you also have to listen to some brainless announcer bloviate about the infraction while the zebras discuss the matter.

Now as much as a particular penalty might seem to affect a given drive, research shows that preponderance of yellow flags have a limited effect on win totals. Or, as Football Outsiders put it: "Teams with more offensive penalties generally lose more games, but there is no correlation between defensive penalties and losses."

Which might be the case, but that doesn't address the fact that a team prone to penalties is one lacking in discipline. That's a particular little gremlin that might quite well show up elsewhere, say in blown coverage or missed blocking assignments.

With that in mind, I went back and looked at every SEC team's penalty totals for last season. Here's how they matched up by yards per game: 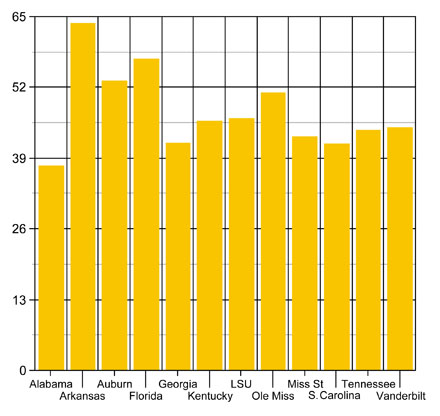 It isn't overly suprising that Alabama was easily the least penalized team in the conference last season. Avoiding penalties is pretty high on Coach Saban's list of priorities. His playbook makes it abundantly clear: "Must eliminate all undisciplined penalties."

The Crimson Tide not only had fewer penalties than any other team (66) but also the least yards lost (490). To compare, Arkansas, the most penalized team in the conference had half as many more yellow flags thrown at them during the season for 340 yards more than the Crimson Tide lost.

BUT PAWWLLL!!! IT'S A BAMMER CONSPIRACY!!!

Actually, it's not. Alabama last lead the conference in fewest penalty yards per game in 2007. Not a season recalled with relish around these parts. And the Crimson Tide came in third in the SEC during the 2009 National Championship run. Only Kentucky and the Lane Kiffin-led Volunteers were less penalized during that season.