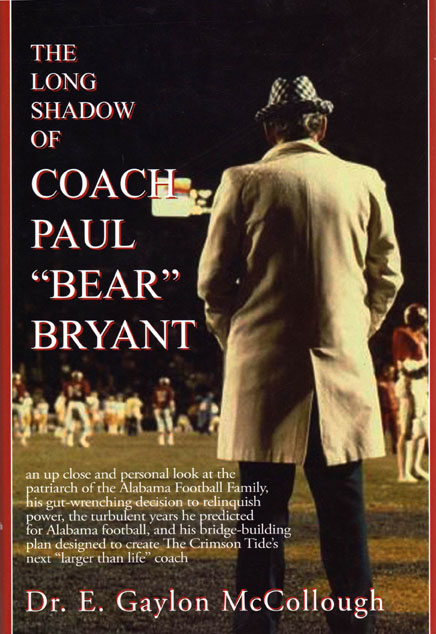 When Paul W. Bryant passed away on Jan. 26, 1983 he left behind a football program with an unmatched championship legacy. It was also suddenly adrift after a quarter century under the unquestioned control of one man.

Gaylon McCollough was in a unique position during that time. The former Alabama player was also Coach Bryant’s physician and a member of the steering committees that were formed to find a new head coach for the Crimson Tide. His 2008 book The Long Shadow of Coach Paul "Bear" Bryant is a recollection of his association with Coach Bryant and a description of what transpired after his passing.

Let’s start out with the positive. McCollough’s book offers a number of fascinating tidbits about Coach Bryant’s approach. It turns out that he used statistical analysis to help fine tune his game strategy. He also had designated assistants scout his teams during practice to catch anything that might "tip off" opponents through inadvertent behavior.

There’s a good portion of The Long Shadow that involves McCollough’s experience being a player under Coach Bryant that is interesting as well. Yet past that, there's not much left to recommend about this effort.

The first problem is that The Long Shadow is not a well written book. The convoluted style is a struggle to read and McCollough seems to have some kind of weird fetish for italics. Every single page is littered with italicized word and phrases for no apparent reason. It's doubly confusing when he seems to refer to comments that actually did have some kind of emphasis when they were spoken.

Once past that, the reader has to contend with whole chapters are longwinded expository passages. McCollough goes for pages making promises of all the great secrets that will be revealed in the coming pages. After three or four chapters of this you really start to wonder if the payoff could possibly be as great as it is being made out to be.

That great revelation is this: McCollough insists that before Coach Bryant died he believed that the Alabama football program was in for some bad years and that fans would not understand the reason. "It is the ‘why’ that I am in the process of sharing with all that read this book," McCollough avers on page 30.

So you slog through the narrative for another 119 pages before you finally reach the grand revelation (and you better believe it’s italicized) lack of stability.

The real motive for The Long Shadow is likely a little less grandiose and not particularly difficult to divine. After Coach Bryant's death, McCollough was a member of the search committees that hired Ray Perkins and then Bill Curry. As an account from someone who was "inside the room" when those decisions were made, this could have been an immensely important document. Instead it’s a convoluted defense of what proved to be questionable hires.

Basically, he says Perkins was hired because he was the only candidate willing to quit his current job immediately and Curry, it seems, was just a great interview. That’s not overly satisfying but if McCollough left it at that the book would be forgivable. He doesn't.

"As long as [UA President] Dr. Thomas and I were involved in hiring football coaches and athletic directors," McCollough writes. "Coach Bryant’s recommendations were in play."

Which is interesting since the first Alabama coach to win a National Championship after Coach Bryant stepped down happened to be the first one that wasn’t chosen in a process that included those two men. In fact, it was a coach passed over by them. Twice.

McCollough argues no other coaches could have done any better than the ones chosen by the steering committee and the problems Perkins and Curry encountered were due to dissatisfaction among the team’s supporters. That seems a bit of a stretch but a man is entitled to his opinion. But that's about the point that The Long Shadow gets downright goofy.

Throughout The Long Shadow, McCollough goes out of his way to blast the media for acting in an unprincipled manner then turns around and accuses a former Alabama player – anonymous of course – of stealing $10,000 from Coach Bryant. He even argues at one point that that a cabal of cheating coaches in the conference was the reason for Coach Bryant’s heart failure and death.

This kind of ludicrous accusation becomes par for the course in the second half of the book. He even argues that after Coach Bryant’s passing the Alabama fans that weren’t graduates of the school or participants in the athletic program became Auburn fans out of desperation.

Gaylon McCollough was one hell of a football player and, by all accounts, he was a good friend to Coach Bryant in the times that support was most needed. But he didn’t do Alabama any favors by his actions on the steering committee to find the legendary coach’s replacement and he didn’t do himself any by penning The Long Shadow of Coach Paul "Bear" Bryant in defense of it.

Next week: A Lynch Mob Mentality