Wallace Wade: Demoralizing the Opposition with the Second Team

Share All sharing options for: Wallace Wade: Demoralizing the Opposition with the Second Team

Yesterday we took a look at Coach Saban's philosophy toward the game and found the boldness within his method arises from the philosophy of domination in his overall approach. "Create a nightmare for your opponent," is the credo he preaches to his team and then creates a system to allow them to become it. Interestingly, if you look at the history of the Alabama football program, you'll find this is a sentiment that goes back quite far.

Boldness, it turns out, has long been a hallmark of the Crimson Tide coaches and none more than Wallace Wade. Arriving at at the University of Alabama in 1923 with a reputation as an iron-willed disciplinarian that brooked no nonsense from anyone, much less his players. 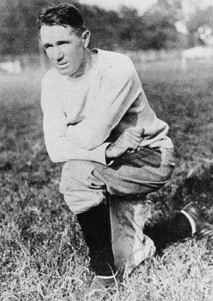 "Nobody every got backslapped into winning anything," he told them.

He promptly went about shaping the team into a behemoth. The Crimson Tide was the nation's scoring leader in the five year span between 1923 and 1927. That period saw Alabama travel twice to Pasadena to appear in the Rose Bowl and claim the program's first two national championships.

Yet, defense was the bedrock of Wade's squads. In his last season at the Capstone, 1930, the depth of the team he built gave Wade the ability to start the second squad and have them hold their own against the opposing team for quite some time.

In an interview with sportswriter Clyde Bolton, the former coach admitted the point of the exercise was psychological.

"You see, that second team was able to hold everybody scoreless the whole year. We knew it would help us for an opponent to play the second team and not score and then know we were sending in the first team."

And it worked. Alabama's first team stayed on the bench for the first quarter then came in and crushed the opposing team. At the end of the season the Crimson Tide had outscored its opponents 271 to 13. They held held eight teams scoreless and only Vanderbilt and Tennessee were able to reach the end zone and both of them accomplished the feat only once.

It wasn't exactly an original idea. Knute Rockne had previously employed the tactic with spectacular success at Notre Dame calling his second squad the "shock troops." Tulane's Clark Shaughnessy tried the gambit against LSU in 1926 but the Green Wave second team allowed the Tigers to score what proved to be the winning touchdown of the contest.

Yet Wade used it every game of the 1930 season up to and including the Rose Bowl. The win in Pasadena over the vaunted Washington State squad gave Alabama it's third national championship.

Even at Alabama, the idea of a strong scrub team wasn't completely new. When Xen Scott took over the football program in 1919 he prioritized the practice team putting them under the care of assistant Adrian Van de Graff. By mid-year this squad was seriously challenging the varsity in practices, so much so Scott was forced to limit contact to prevent his starters from being injured. These scrub players went on to be the core of a dominant Crimson Tide program in the early 1920s.