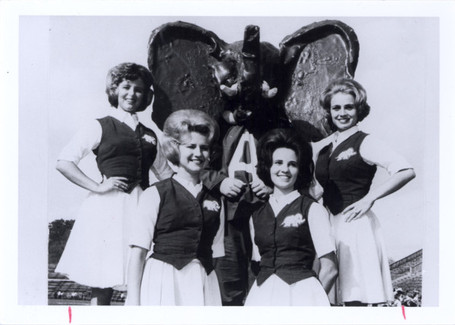 For anyone that's tired of the "Big Al Planking" photos that keep popping up on Twitter, it could be worse.  @LivingCrimson posted a couple of "GAH KILL IT WITH FIRE" pics of Big Al from 1963 (pictured above) and 1975. Truly we are living in a golden age of mascotery. On to the links!

Built like a tank, the former Vigor standout saw mostly mop-up duty in 2010, rushing for 111 yards on 14 carries (7.9 yards per carry) against the likes of Duke and Georgia State with a handful of carries against Mississippi State, Tennessee and Michigan State. This year, he's just an ankle sprain away from being one of the Tide's featured backs.

Fowler's new role may give the muscular sophomore, who once described his running style in high school as that of an "untamed beast," a chance to show the college football world what his high school coach has known all along.

"He has crazy explosion," said Vigor coach Kerry Stevenson, who watched Fowler run for 1,182 yards and 25 touchdowns to help his 2008 Wolves team win a 5A state title. "For 6-foot, 245 pounds to jump up and dunk a basketball with two hands? ... The only thing he needs to do is build up his confidence. He's going to be a great NFL running back one day."

"They just told him to take this class, pass it and he'd be eligible," Winston said told the TimesDaily. "They didn't say how long it should take. He passed the class in eight or nine days. He did the reading, took the test and passed it. We got the paperwork saying he made an 'A' on it. But he's doing whatever he has to do to be clear. We don't want anything to come down. We're just trying to make everything clear because we want him on the field."

Has Playing Kickoff Game in the Georgia Dome Truly Helped Alabama's Recruiting in Georgia? - The ACC and SEC Blog

Alabama is doing well is in the 2012 class where they have six commits from Georgia. However, Rivals has just two of these players listed at four stars. If Saban continues to recruit like he has been of late then the Tide will fill up on four and five stars from their own state as well as Florida, Tennessee, Mississippi and around the country.

Mocking the Draft has Nico Johnson the No. 4 outside linebacker in the 2012 NFL Draft. And there's a poll!

"My most memorable occasion was getting an autographed football from Coach Paul Bear Bryant of the University of Alabama and taking it as a gift to the Mayor of Miami."

Fred Sington was an All-America tackle in 1929 and 1930. He was the only person named to both the "All Century" football and baseball teams at Alabama. He was elected to the Helms Hall of Fame and, in 1955, to the National Football Hall of Fame.

Steve Cash, the head of the Shuttle Propulsion Office at Marshall Space Flight Center, was a player on the 1977 and 1978 Alabama Crimson Tide teams that won back to back National Championships.

Bulldogs Blog: Another note on King