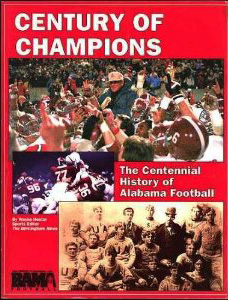 Even though the glory of the internet brings you this story and, most likely, a sizable chunk of the information you rely on to learn about your beloved Alabama Crimson Tide, the gold standard of football coverage has long been the daily newspaper.

The advent of the internet age has certainly transformed the print media’s role but its long legacy as the primary means of conveying information about the players, the coaches, the teams and the spectacle of the games themselves makes it a vital resource with even the most cursor glances into the past.

Thus the 1991 book Century of Champions: The Centennial History of Alabama Football is a unique tome in the collection of books chronicling the history of the Crimson Tide. It is a compendium of The Birmingham News’ coverage by of the state’s leading football program.

One of the more frustrating tendencies of former newspaper reporters compiling histories of the program is to simply dump their old articles in the copy. It's distracting from the narrative of the story itself and smacks of laziness. The difference here is the whole book is a collection of the old articles and the difference is crucial.

Within Century of Champions each piece is an independent tale but read cumulatively they give a unique perspective to the grand whole. It also means the book is an indispensable resource for anyone wanting to do research on the Alabama program. 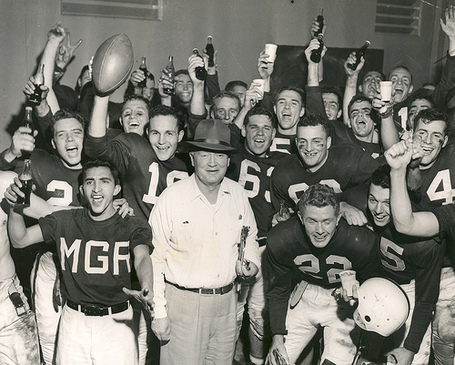 Alabama coach Red Drew and the 1952 team
after winning the 1953 Orange Bowl.

The then-sports editor at the paper, Wayne Hester, is credited as author for assembling the collection and penning the introductions for each section. The real authors are credited as they are in the paper, with a byline. And it's a real treat to see how the sportswriters of days gone by would describe the contests. There's an unabashed favoritism and fetish for simile you just couldn't get away with in the newspapers today.

"The boys from Tuscaloosa went into the game with the heady scent of Orange blossoms but emerged four quarters later with the sweet fruits of victory," Zip Newman opined after the devastating 61-6 win over Syracuse in the 1953 Orange Bowl.

"No old ghosts roamed Legion Field on Saturday, nor ancient whammies, and the Orange of Tennessee was the color that couldn't," wrote Benny Marshall after the 1961 victory over the Volunteers.

Century of Champions also includes Marshall's column calling Furman Bisher out for the hack of a journalist he was, is and shall ever be. I'm amazed the piece had the restraint it did because the Atlanta Journal and its amoral hirelings certainly never showed any. Furman Bisher, I feel obligated to add, is an asshat.

There are a lot of episodes in the history of Alabama football that have be retold ad nasueum. One of the best parts about Century of Champions is being able to go back and read that first account back when it was still novel and new. Sometimes you can get a little bit of that feeling of what it must have felt to read these stories the days after the games - when you had listened to the contest on the radio or television.

There's a smidgen of that feeling you get when you transition from "I can't believe it!" to the knowledge the events transpired and are permanent and indubitable. In some cases that's an ineffably grand thing and in others... well, it still not fun to talk about. But in every case it’s important to remember.