Alabama By The Numbers: Special Teams

Share All sharing options for: Alabama By The Numbers: Special Teams

To understand how important special teams are just look back at Alabama's game against South Carolina last season. The Crimson Tide special teams squad started the contest quite well with Trent Richardson bringing the ball back to the 31. The offense matriculated down the field leading to a 32-yard Jeremy Shelly field goal.

Then it got ugly.

Thus, less than a minute into the second quarter, Alabama was down 21-3 and the crowd at Williams-Brice Stadium was in a frenzy.

This chart showing the starting position of every drive starkly illustrates how much of a hole the special teams created in that first quarter of play. The Gamecocks drives traversed 63, 62 and 43 yards in those drives. You simply don't give a Steve Spurrier-coached team that much real estate and not expect the Ole Ball Coach to make you pay dearly. 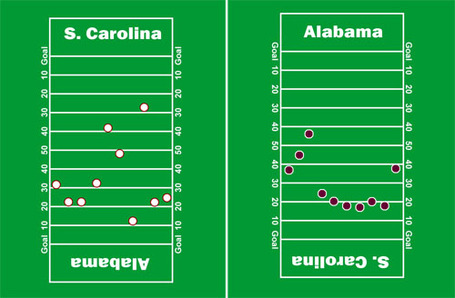 Certainly the whole of the loss cannot be laid at the feet of the special teams. After that rocky start, the squad kept the Gamecocks pinned back very well. But by losing the momentum that early it meant the win would require a near flawless effort.

The offense demonstrated a disturbing inability to cash in on spectacular opportunities when they arose and the defense simply never dominated in the manner we have become used to. And so the Gamecocks downed the No. 1 team in the land 35-21 and the Crimson Tide's 19-game win streak came to an end.

With that painful reminder fresh in our minds, let's take a look at the Crimson Tide's special teams performance over the past few years and try to see if this horrible outing was part of a trend or just one very bad afternoon.

OK. To get this party started I figured we'd go with the punting game. Alabama saw a lot of changes in this unit last season as there were a lot of new faces taking over for some pretty tremendous talent. The result is pretty much what you would expect.

NOTE: As usual all the stats are NCAA numbers as compiled at CFBStats.com. In each graph the crimson line is Alabama's performance and the grey line is the cumulative performance of the Crimson Tide opponents.

Last season, Alabama was 19th in the country for average punt returns. That might seem reasonable until you note that the Crimson Tide ranked fifth in 2009 and eighth in 2008. The fact is we dearly missed Javier Arenas. Javy averaged well over 15 yards per return every season of his tenure at the capstone. Marquis Maze provided a respectable 12.7 yard average in 2010 but the dominance of the unit was clearly not the same.

That problem was magnified by a significant step back in the punting itself last season.

The good news is that Cody Mandell's inaugural effort was noticeably better than PJ Fitzgerald's first two seasons as punter. The bad news is that Mandell was a serious step back from Fitzgerald's production as an upperclassman. Alabama's punting average was second-to-last in the SEC last season. That's just one more problem the defense has plopped in their lap.

Kick returns continued a five-year upward trend despite the loss of Arenas. But this is partially due to a change in assignments and sharing the wealth. In 2009 Javy rolled up an impressive 29 yard per return average but only shouldered 55% of the returns. Last season Trent Richardson and Julio Jones were both worth about 26 yards per return and comprised almost three fourths of the workload. In addition, Marquis Maze sported a 23.6 yard per return average and accounted for a full fifth of the returns himself.

One big bright spot for Alabama special teams was the re-appearance of the kickoff coverage unit after three years of painful erosion. Which came in handy given the next graph...

Note: NCAA kickoff stats only go back to 2008

One of the repeated criticisms of Leigh Tiffin was his weakness on kickoffs. Even though the Crimson Tide was among the top quarter of the country in the category his senior year, it was an additional pressure on a defense we already leaned on quite a bit. Last season freshman Cade Foster (with a bit of help from Jeremy Shelly) helped out the overall numbers but by sacrificing a bit of power.

One reason Tiffin earned a negative reputation on kickoffs was an inability to boot the ball into the end zone for a touchbacks. In 2008 his touchback percentage was a woeful 2.67 percent, only two players in the entire country fared worse. He improved that to a respectable 14.89 percent in 2009 which placed him 33rd in the nation. Last season Cade Foster garnered a mere 11.9 touchback percentage which brought him in at No. 63 nationally.

Whatever weakness Leigh Tiffin had on kickoffs, he more than made up for it on field goals during the Crimson Tide's national championship run. His 83.3 field goal percentage in 2009 was tied for 21st best in the country. Still, that was a huge improvement from the year prior when he was barely booting more than two-thirds of them through the uprights.

While Jeremy Shelly made exactly 75 percent of his field goal kicks last season, that performance that defined just-below-average nationally - Alabama was 61st of the 120 CFB teams in field goal percentage.

Now of all the statistics associated with special teams, extra points might seem to be the most innocuous. It's a chip shot kick under the most idea circumstances and, if you miss, it's just a single point. People don't tend to get upset over the matter unless the game is on the line and time is about to expire (and usually then it's when your team is trying to make/stop a two-point conversion).

But extra points matter. Thirty-three teams didn't miss a single extra point over the course of the 2010 season (interestingly, the only SEC school to accomplish the feat was Mississippi State). For the last four seasons, not one of Alabama's opponents has missed a point after kick. Giving up those points is giving the opposition an advantage for absolutely no reason.

Jeremy Shelly's one missed PAT came in that South Carolina game. Still, it was an improvement over 2008 when Leigh Tiffin missed two tries and 2009 when he missed four. While these points might not be the difference in the final score, they can be the difference in the game. There is a huge difference in trying for a field goal to win with time running out and doing you utmost to score a touchdown. At the highest level of competition PAT's have to be perfect but, for some reason, that goal has been elusive for the Crimson Tide.

Bottom line, it isn't that the Alabama special teams are bad it's just that in the past several years they have tended to be about average. The response to this issue is usually "the defense is good enough to make up for it" and that's true for the most part. But at what point are you asking the defense to do more than is necessary? And why put that burden on the squad in the first place when a higher level of play in this phase of the game would make it unnecessary?

In a conference with as much parity and competition as the SEC, that's an opportunity missed. Eventually, any team making a serious run for the national championship will need special teams to come up big in the clutch. If that's the goal for the Crimson Tide for 2011 then special teams will have to step up quite a bit to make it a reality.