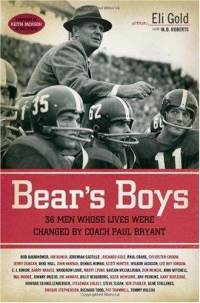 "Don't y'all make me more than I am. I'm just a humble coach who has the opportunity to teach you." - Paul Bryant

If you're like me, the first thought that pops into your head when you see a book like this is "do we really need another book about Bear Bryant?"  In most cases, the answer is likely "no."  The man's life and career has been chronicled so thoroughly by this point that a fresh take on Coach Bryant would be almost impossible.  Still, tails of the Bear are big business among Alabama fans, and Bear's Boys at least attempts to give its readers a new approach to it's subject, namely the recollections of former playerson how Bryant affected their personal lives and careers after football, not just their success on the field.

Penned by long time radio announcer Eli Gold, Bear's Boys features anecdotes based on interviews with 36 of Bryant's former players.  Gold acknowledges in his forward that 36 is too small a number to fully chronicle the impact that Bryant had on the game and the hundreds of players who contributed to Bryant's success as a coach, but the players selected represent a wide range of Bryant's career, from Howard Schnellenberger, who played for Bryant at Kentucky and was a long time assistant, to Jeremiah Castille, game MVP of Bryant's final game as a head coach.  Though the stories are from different eras, the common theme among them is simple; each man credits Bryant with their development as a person, not simply as a great football player.  The intense personal interest Bryant took in the lives of his players is almost as remarkable as the intense focus he placed on the game, and even though there is no denying Bryant's success in football, his greatest success lies with the positive impact he had on the people around him.

But what also emerges is the story of how coaching and being involved in the lives of so many different young men ultimately affected Bryant's character.  I find it somewhat amusing that, as time passes, the image of Bryant has continually evolved from a hard nosed disciplinarian to a kindly, grandfatherly figure among fans.  This book will do absolutely nothing to dispel that, but after having read through so many accounts it's easy to understand the trend.  Jim Bunch, a three time All-SEC offensive lineman and member of the '78 and '79 national title teams, puts it best.  When asked if he played for a "kinder, gentler Bear" than players from the 50s and 60s, he responds "if I compare him to myself, I don't know if I'm more mellow at fifty than I was at twenty two, but I have a better understanding of life.  I would say with all the experiences he had that he probably handled things better when I played for him than he did when he was younger."

Overall, Bear's Boys doesn't break any new ground or provide any new insight into the mind of one of college football's greatest legends, or really even into the lives of the players that made him so.  It's shallow, sure, but ultimately it's purpose isn't to rehash a career whose highlights are all well known, but instead to shift the focus onto the far reaching personal impact that Bryant had on so many lives. Where it succeeds most is in telling the stories of players that fans who weren't around for that particular era won't quickly recognize.  For every Joe Namath there's a Gary Rutledge, players who had success at Alabama but don't loom as large in the imagination of fans who didn't witness their on field triumphs.  The stories of guys like Jim Bunch, Richard Cole, Gaylon McCullough, and E.J. Junior were made all the more interesting because I came at them with an ignorance of exactly why they were included but leaving their particular chapters with a better understanding of players who are every bit as important to the Tide's history and tradition as Namath, Stabler, and Newsome.  So even though we didn't necessarily need another book on Coach Bryant, it's still a welcome addition to the pile.