Saban by the Numbers: Offensive Production

Share All sharing options for: Saban by the Numbers: Offensive Production

In case you missed it, the annual SEC Media Days took place last week. Don't kid yourselves, this event has less to do with anything the featured speakers have to say about themselves and their respective teams than it does with the media horde justifying their existence to each other.

Given the reports of Coach Saban's comments you would think they consisted simply of insults to the journalistic throng and commentary on the t-shirt one idiot in the lobby was wearing. Which is all the more disappointing since if you go to the transcript of his comments you'll discover there was actually some pretty interesting information in there.

One comment about the offense stood out in particular. It was a response to the observation that the Crimson Tide will go into the season with an unproven quarterback and powerful - though thin - running back corps:

Philosophically we're not certainly going to change how we play offensively. I think you have to be able to run the ball to be successful, whether it's in the red area or take the air out of the ball at the end of the game. I also think you have to have the ability to make explosive plays, and that's usually made in the perimeter by throwing the ball much more easily and effectively than it is breaking long runs. So that balance on offense is critical to being successful.

So, is this the case? Does Alabama run a balanced offense with the ability to make big plays, particularly in the passing game? Let's look at the balance portion of his comment first.

Here is a chart of the Crimson Tide offensive attack over the past five years. The bar graph represents the total number of plays for each season and the pie charts show the total yardage for each corresponding year. As usual, these are the NCAA numbers made available through CFBstats.com. 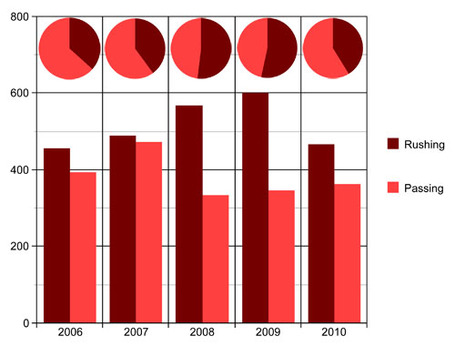 While the overall amount of passing plays may sometimes overwhelm the number of rushing plays, it's pretty clear the Crimson Tide enjoys more success in the seasons where the production is more balanced. In 2009, Alabama claimed 53% of its offensive yardage on the ground. In 2010 the Crimson Tide's running game garnered just 41%.

Now last year around this time we examined the offense and detailed why the rushing game was so important to the Alabama game plan. The emphasis on the running game is important because it allows better control of the tempo of the game but it's not exclusionary. The passing game isn't a tacked on, it's a vital element of the strategy.

Which brings us to the big-play part of Saban's observation. According to his playbook, a big play is defined as a pass that goes 20+ yards and a rush that makes 15 or better. Luckily, we have those stats available to us courtesy the CFB stats folks.

Here are the number of passing plays greater than 15 and 25 yards over the past five seasons.

And here are the number of rushing plays for greater than ten and 20 yards over the past half decade:

While Coach Saban's point that it is much easier to make big plays in the air than on the ground, it seems pretty clear that when the Crimson Tide has more big rushing plays they have greater success. Last year was filled with huge pass plays (Gracias, Julio Jones) but the amount of big-gainers on the ground fell noticeably.

It's an open question whether this was due to a deficiency in the offense or simply more teams targeting Alabama's run game. The solution, though, is probably the same. Establish the running game and then take what the defense gives you to win the game.