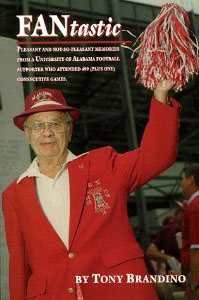 There are a lot of folks who claim to be die-hard Alabama football fans but few people back it up with the devotion shown by Tony Brandino.

Between 1954 and 1997, the self-proclaimed residential hardware consultant from Birmingham attended 500 consecutive Crimson Tide football games. (He also took an extra trip to College Station, Texas in 1988 when the game against Texas A&M was pushed back due to Hurricane Gilbert which he counts as his "plus one.")

The odyssey is recounted in his book FANtastic published as he reached his milestone on Oct. 18, 1997. The next week his streak was felled by the flu.

The streak started in the dark days of the J.B. Whitworth regime when wins were scarce and die hard fans were a rarity. But Brandino and his brother stuck with the Crimson Tide and were rewarded with Coach Paul W. Bryant’s quarter century at the helm. The years after Bryant's tenure were not as sweet but, as he notes, they were full of great moments nonetheless.

The greatest game of all, he says, was Coach Bryant’s 315th victory in 1981. It earns the spot not simply due to the import of the record or the fact that it came against Alabama’s arch-rival but because it was a great game. "In retrospect," he says. "I think the gods of drama were in charge."

FANtastic outlines the highlights but also is comprehensive in detailing the low points as well. Brandino recounts the dismay of witnessing "Punt, Bama, Punt" as well as the team’s ongoing futility against Texas and Notre Dame. There is a legion of delightful anecdotes here; Woody Hayes kicking the Super Dome goal post, getting mistaken for a Shriner in Honolulu and Pat James’ professional specialty.

The book is a surprisingly good read, due no doubt to the fact that it was penned by longtime Birmingham News sportswriter Clyde Bolton from audio tapes provided by Brandino. The result is a very honest and personal testament that doesn’t bog down in irrelevant detail as you might expect. FANtastic is an interesting window into the experience of Alabama football from the perspective of a fan with the fortune to be on hand across the whole of Coach Bryant's tenure at The Capstone. 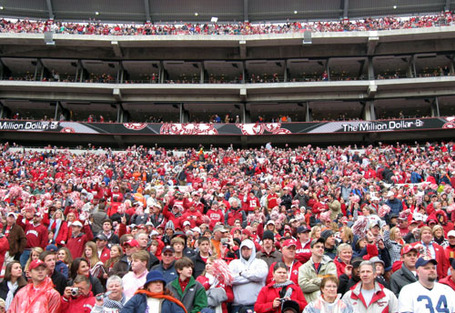 It's just not quite the same without Tony there.

The start of Brandino’s fandom began when he was 10 years old growing up in Birmingham and heard Alabama’s victory over Washington in the 1926 Rose Bowl. "To say I was marked by a nip on the leg would be gross understatement. It was a big bite."

He began selling papers mainly because he could hawk the game editions at the stadium and stay for the games. In 1954 his brother, Paul, got tickets for the home games and the pair fell into regularly attending. For years afterward the streak was a curiosity but after a chance comment by Mary Harmon Bryant it became a mission.

Brandino's effort, although formidable, is eclipsed by Dick Coffee who has attended every Alabama Game since 1946. As of this season his total is 754 which is just 43 shy of the Mt. Everest of fan attendance streaks: USC diehard Giles Pellerin who attended 797 games before passing away in the parking lot of a Trojan's game in 1998.

Brandino's affection for the Crimson Tide began, as it did for many Alabamians, as the team became a power in the 1920s. That he never attended the school didn’t mean his devotion was any less authentic than the alumni. In fact, Brandino’s loyalty to Alabama football earned him an honorary membership to the A-Club.

FANtastic is a testament not just to Alabama football but that weird and wonderful enthusiasm any devoted fan feels for their team. Is it ridiculous and excessive at times? Yes. But it’s also something that speaks directly to a persons humanity if they have the grace to keep the proper perspective.

"Okay, so I didn’t coach a game. Also, to my disappointment, I never got to play in one for Alabama, as I dreamed about as a kid. But, believe me, the void has been filled."