Alabama By the Numbers: Roster Experience

Share All sharing options for: Alabama By the Numbers: Roster Experience

Like most things that seem too obvious to mention, the value of roster experience can be difficult to quantify. It makes complete sense that the more high-quality players you lose to the pros will adversely affect your team's performance. And, conversely, the more returning experienced guys you have should bode well to at least maintain the squad's level of play.

The problem is figuring out a way to measure this effect in a way that provides any meaningful information. To start, here are the numbers that should affect the SEC in 2011 - the total picks in last April's NFL Draft and expected number of returning starters. For the numbers here, I am relying on the NFL for the draft and Phil Steele for the starters. (I know the numbers in the latter might have changed a bit in the last six months but for such an inexact indicator I'm not going to scour every team's roster.)

Still, maybe we can shed a little light on the situation by looking at last year's numbers and the final record of each program in question.

Well that's clear as mud. Alabama, Florida, LSU and Tennessee all lost six or more players to the draft and all but LSU had a worse record than the year before. But it's hard to say ten-win seasons are really a dropoff in terms of production. Alabama, LSU, Tennessee and Kentucky all brought back 13 starters or less and all but LSU took a step back.Thanks for ruining it for everyone LSU.

Almost as important is what this chart doesn't say. There really isn't anything to indicate Auburn's insane improvement in production with the addition of one extremely talented player. In the same manner, LSU's lack of a dropoff is as mystifying as Georgia's incredible slide.

It seems to me, and this is just my opinion, that roster experience is helpful as a data point instead of a specific measure of a team's production either past or projected. Thus if a team has some other metric that seems too close to call such as, say, a very close Pythagorean Win projection, then the experience of the squad in question can be used to evaluate that more thoroughly.

Folks like Steele who make serious hay of this statistic typically have created a unique metric to measure it to deduce their conclusions. Steele contends that 70% of the teams that "rank among the top of the NCAA in players drafted" have weaker records but also notes the next year's National Champion is very likely to appear on his list of teams affected (because teams regularly putting players in the NFL are usually the top squads in college football).

I'm not about to delve that far into this matter primarily because my even limited assessment of it makes me doubtful of it's merit as a means to evaluate teams with any degree of analytical rigor. But perhaps someone out there with a bit better background might be willing to give it a go, so I've put together what numbers I've got to give them a head start.

Now when I went over this topic last year I compiled a chart comparing every SEC team's draft numbers and subsequent record. I've updated that for this post: 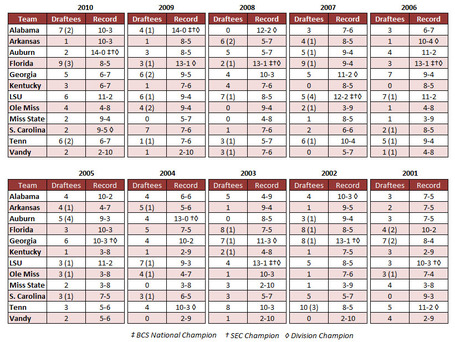 And like last year, it's really hard to pick out any real pattern to it. In almost every case, losing a large number of players to the draft seems to be followed with a regression in the team's overall win/loss record the following season. Oh and this observation I made last year:

"It would seem losing more than six players to the NFL draft makes it almost certain a team will suffer a sub double-digit win season. In fact, the more likely result is a eight or nine-win campaign."

Was flat out wrong in not one but two instances. Here's another example of my awry analaytical work. Last year I examined the percentage of SEC teams suffering weaker records after losing sizeable numbers of players to the draft over a ten-year span. Here's that same comparison done for the decade ending in 2010 and compared to the prior percentages.

Yeah, the odds still seem to be against you down the line but not in any pattern that I can see. Some of this, obviously, has to do with the increasingly small sample size but a good deal of it has to do with the specific players and the positions they play as well. Until someone comes up with a robust way of evaluating all those figures, I think this indicator is gonna remain just a "rule of thumb."