In case you missed last week's article about assessing strength of schedule, you'll want to read it here before reading on.

Today, we'll be applying the same metric to examine Alabama's schedule for the upcoming season. Obviously, we don't have FEI ratings yet for a season that hasn't happened. Instead, we'll be using two pre-season 1-120 rankings to assess each FBS team.

Now, it should go without saying that pre-season rankings are certainly not going to be very precise, if they are worth anything at all. Some teams that aren't ranked all that high will end up among the nation's elite--last year's top two teams in the FEI ratings, Auburn and Stanford, were nowhere to be seen near the top of last year's preseason rankings. Others who are at the top, meanwhile, will end up much lower down the pecking order than many expect (see Georgia 2008).

So with all the usual caveats about the worth of preseason rankings out of the way, we can at least use them to judge how difficult top teams' schedules are expected to be. For our rankings, we'll use the average of two 1-120 rankings I found online, one from the Sporting News and one from Rivals. Are there better preseason rankings out there? Probably. These look fairly reasonable though, and at any rate we won't know which rankings were truly better until late in the season, and by that point we'll have actual FEI data anyway.

Below the jump we'll take a look at breaking down the Tide's schedule using these preseason rankings to predict expected opponent strength and the likelihood of a typical top team to win and lose games against such a schedule.

Here's how we'll break things up for examining schedules for the upcoming season. First, we'll average each team's ranking in the two systems. Yes, it's true that the order of the top teams in the Rivals rankings haven't been revealed yet, but we know which teams are going to be in the top (the ones that are missing), and that's the most important thing for our purposes. We'll update the data as it's unveiled when we examine other teams' schedules later on.

Looking back at last week's article, you can then determine into which category a given team is expected to fall and thus the probability of an elite team winning or losing a game against such an opponent. To make things just a bit more complicated, though, we're going to take teams right around the cutoff for each category and assign them values weighted between the two categories between which they fall.

For example, the cutoff point between the first and second categories is 12/13. For teams whose average ranking falls within four points of that cutoff, we have assigned them probabilities averaged between the first and second categories. So if a team's average ranking was 10.5, they were given win probabilities halfway between playing a team in the first category and playing a team in the second.

The same was applied for teams within five spots of the cutoff between the second and third categories (25/26), and teams within six spots of the third and fourth categories (52/53). This all may seem unnecessarily complicated, but since we're dealing with a lot of uncertainty given preseason rankings and all, it seemed preferable to allow for some leeway for teams expected to be near the cutoff points.

We'll work through each of Bama's opponents and then calculate the total win/loss probabilities at the end.

The good news here is that the Tide has only one opponent expected to be in the top 10, and we get that opponent at home. An elite team is expected to beat another elite team at home about 62% of the time. Compare this to last season, when Bama had to play three such teams (Auburn, LSU and Arkansas), two of them on the road.

Some people are really on the Arkansas bandwagon, while others are skeptical, so it seems fitting they ended up here on the borderline of the top group. Like LSU, Bama gets its second toughest opponent at home, where an elite team should be expected to win just over 67% of the time (average between 62% for a 1st category team and 72% for a 2nd category team).

The fact that Bama has only two opponents expected to be among the nation's elite in the regular season is telling, as that's a reprieve from the last two seasons, especially considering that the Tide is fortunate enough to get both at home--a huge factor when top teams collide.

South Carolina is included here as the presumptive SEC Championship game opponent. Obviously this game may or may not take place, but if Bama expects to compete for a national championship, such a game will be a part of the proverbial gauntlet. On a neutral field, the win % of such a game against such an opponent would be just over 59%.

While Bama's schedule seems relatively favorable (compared to past Bama schedules, definitely not compared to some other national contenders) in terms of opponents expected to be in the top 20, there's a scary concentration of teams expected to be on the periphery of the top 20--and the Tide plays each and every one of them on the road. Individually, a top team should be expected to win each game against such opponents on the road just under 71% of the time. However, the likelihood of winning all four such games is only 25%.

In other words, if preseason rankings are any indication, Bama will be favored in each of these road games, but the odds of losing--even for a truly top team--each game are significant (nearly 3 in 10). Therefore, the odds of playing each of those games without slipping up even once are not all that good. So while the LSU home game on November 5th might get most of the attention, the data suggests there is a much greater chance of the Tide taking a loss in one of these games than in losing that one game to LSU.

Tennessee is the lone opponent expected to fall in the 3rd category--essentially the category of teams that's not expected to be in the top 25, but is just dangerous enough to upset a top team from time to time. Luckily, this game is at home for Bama, where top teams are expected to beat such opponents over 86% of the time.

Put simply, these are games a top team should not lose--even on the road (Ole Miss). The Tide gets five such opponents, which is fairly in line with past Bama schedules.

Put all these win probabilities together, and here's what you get: 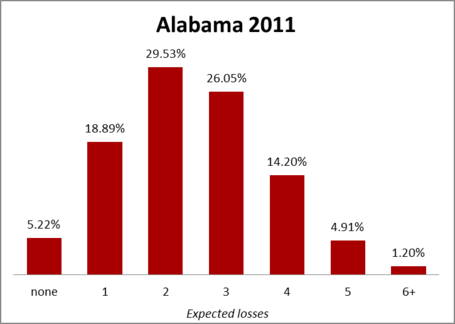 The first thing to remember is that these probabilities are for your average top 12 team, meaning teams ranked anywhere in that range. Put another way, you could think of it as the probabilities for a team that is truly the 6th or 7th strongest team in the country. If it turns out that Bama is actually one of the truly strongest one or two teams, the actual probabilities would shift somewhat to the left (meaning higher likelihood of losing 0 or 1 games, less likelihood of losing 4 or 5 games, etc. Similarly, if it turns out that the Tide is really not among the 12 strongest teams in the country this season, the probabilities would shift greatly to the right.

And of course, all of this is dependent on how good the Tide's opponents actually turn out to be. For example, if Mississippi State comes out of nowhere and ends up as a truly elite team (see Stanford last year) or if LSU ends up overrated and falls down into the bottom half of the top 25, things change significantly. That's why we'll have to reexamine everyone's schedule at or near the end of the regular season when we have real data.

With that said, here's how this year's schedule is expected to compare to last year's (which also includes a 13th game SEC championship, even though Bama didn't actually qualify for it). 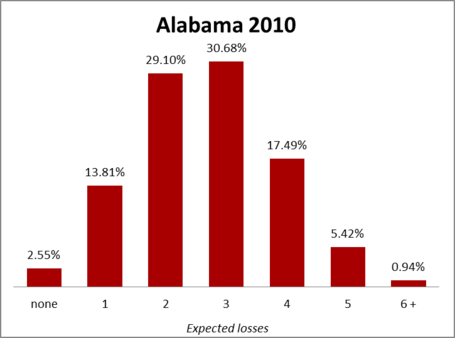 Basically, what you've been hearing does appear to be true: Bama's schedule is expected to be somewhat easier than last year's and even 2009's. However, it's not expected to be that much easier, and as we'll see in later pieces here at RBR, it will still be much tougher than other national contenders.