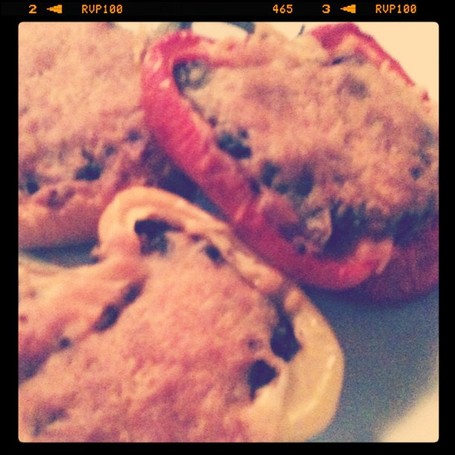 Since y'all hate my phone's camera, I'll just hipster it up a little.

Ok folks, this week we're doing stuff bell peppers.  They're pretty easy and forgiving, and you can do most of the prep work the night before.

4 bell peppers, halved (your choice on color, but I wouldn't recommend orange for obvious reasons)
1 medium onion diced
1 cup frozen corn kernels, thawed
1 can black beans
4 oz chorizo sausage (one of these will do)
1/2 cup rice, uncooked
about 2 cups shredded cheese (whatever you like, I used cheddar cause its what I had and forgot to get something more appropriate at the store)

For the filling: cook the onion and corn with the chorizo sausage in a pot over medium-high heat 'til the onion is tender.  Add the beans and cook 'til heated through.  In the same pot, add the rice and 1 cup of water, raise the heat to high and bring to a boil.  Reduce to a simmer 'til the rice has absorbed all the liquid.  Remove from heat and stir in a good handful of the shredded cheese 'til its all nice and blended.  Now this is a very basic stuffing that gets the job done, but another variation that I've done omits the rice altogether and instead adds diced jalapeno, zuchini, squash, tomato, and bread crumbs.  Its all the same principle, you just toss it together, heat it up 'til it's cooked through, and plop it in the bell pepper.

Assembly: Spoon the mixture into the halved bell peppers, leaving enough room on the top to add more cheese without it spilling out everywhere. That's pretty much it.

Cooking: If you want to do this in the oven, simply place the peppers in a baking dish and cook in a pre-heated oven at 350 for about 45 minutes to an hour.  You'll know they are done when the peppers are very soft to the touch and almost falling apart.  Check the peppers at about the 40 minute mark and when they are close to be doing done but not quite, add more cheese to the top of each to let it melt.  DO NOT add it before putting it in the oven, the cheese will burn before the peppers are cooked through.  Learn from my fail, people.  For the grill, you'll want to use indirect heat.  If you're using a charcoal grill, place a drip pan in the middle with charcoal on either side.  If you're using gas, just don't use one of the burners.  If you do intend to "make ahead," make your filling and refrigerate it overnight.  Before stuffing the peppers to cook, reheat it in a pan on the grill so that everything cooks evenly.