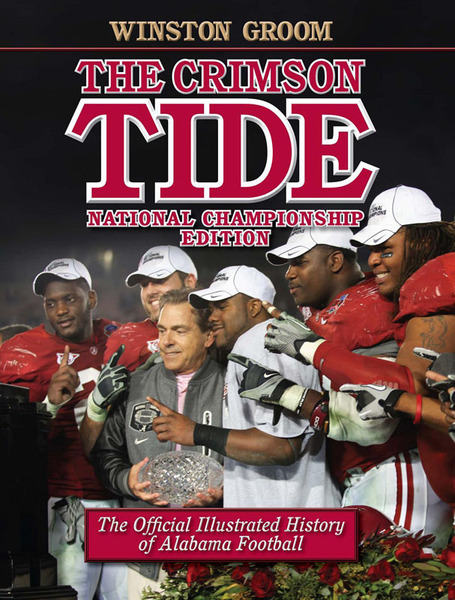 Some books you buy to pore over ever word religiously and some books you buy to look at the pretty pictures. But there’s no reason the "coffee table" book should be one that you’d be ashamed to have on the shelf of your library. Luckily for Alabama fans, there’s a book that isn’t out of place in either environment.

Since 2000, Winston Groom’s The Crimson Tide has been the definitive gawdy illustrated history of Alabama football you leave out on an end table to "tie the room together." It’s also been the rare example of this species that you can find yourself immersed in an hour after you sat down and just started thumbing through its pages.

Last year, the book was updated to include the last decade of events as well as a comprehensive recounting of the 2009 National Championship Season.

Groom, as you are probably aware is a bestselling author who, most famously, gave the world Forrest Gump. In The Crimson Tide he brings his skills as a bestselling author to the enterprise. The result is a telling of the Alabama football story that is intelligently organized and boasts a narrative style that is remarkably fluid.

Make no mistake though; this is the work of an unapologetic Crimson Tide homer. "This is not the kind of story that a dispassionate person ought to write" he says in his own defense at the start. He then proceeds to demonstrate exactly how serious he is in making the statement to begin with. Groom pulls out the purple prose to sing the praises of the 1999 SEC Championship team and the 2009 National Championship squad and God bless him for it.

Still, despite this book’s billing as the "official" history of Alabama football, it falls short in that regard. There is a distressing number of inaccuracies and certain sensitive incidents are glossed over or ignored entirely.


Did someone mention Rocky Block?

That said, Groom’s take on the program’s unpleasant brushes with the NCAA over the past two decades is one of the most concise and well-written versions of the tumultuous events. If you want a short and clear overview of these incidents, this is a great place to turn.

Make no mistake, the strength of The Crimson Tide is its illustrations. There a lot of photographs, of course, but these are particularly well chosen. There are the expected shots of things like Kenny Stabler’s "Run in the Mud," Coach Bryant's resignation press conference and Gene Stallings at the conclusion of the 1993 Sugar Bowl.

The two-page spread of the Terrence Cody’s block of the Tennessee field goal attempt that won the 2009 game is almost worth the price of the book itself.

But The Crimson Tide also has a lot of less well-known images that show some inspired editing like Coach Bryant awaiting the start of the Penn State game that saw him tie Amos Alonzo Stagg’s record and a beautiful hand colored shot from a Bama vs. Georgia game in the early 60s. The covers of game programs that are strewn throughout the book were an inspired touch as well.

If you are reasonably familiar with the history of Alabama football, there isn’t a lot in The Crimson Tide that will strike you as a revelation. What the book is far better for is those occasions you want to go back and be reminded of some game or phase of the program’s history.

And to put on your coffee table to let visitors know exactly who your rooting interest is on Saturdays in the fall, of course.

Next week: Century of Champions