Share All sharing options for: Alabama By the Numbers: Red Zone Efficency

Last year at the start of fall practice, Coach Saban laid a serious knowledge bomb on us when he talked about how the Crimson Tide's defensive success in the red zone was a key part of the team's national championship run. He wasn't kidding either, Alabama was ranked third in the country for defensive red zone efficiency. That's on top of a tie with TCU for permitting opposing offenses within the 20-yard-line the fewest times over the course of the season (24).

So, clearly, Alabama was poised for a step back in 2010. And, sure enough, the Crimson Tide defense saw a decline in defensive red zone efficiency. A whopping 2.15 percentage points. Alabama was tied for third in the nation once again but slid all the way to seventh for a tie with Louisville at seventh for fewest opposition RZ attempts (31).

Here is a look at Alabama's defensive red zone percentages over the past four years. 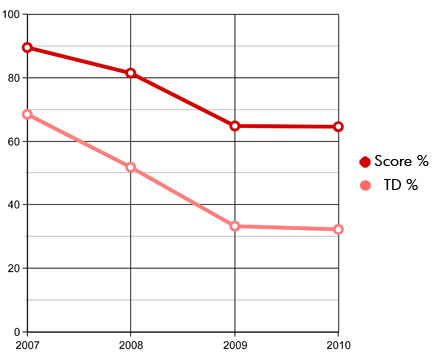 Now, obviously, Alabama led the conference in 2010 for defensive red zone efficiency but, like last year, we wanted a sense of what that actually meant. You know, like on the scoreboard. Although the Crimson Tide allowed 20 more RZ points in 2010, Alabama was the only SEC team to stay under the century mark in terms of RZ points allowed.

Alabama's offense came in seventh in the SEC for offensive scoring percentage last season - exactly the same placing the Crimson Tide had in 2009. From an overall perspective things seemed to continue that holding steady theme, scoring percentage held to the amount it did over the past three season the Tide had just two fewer scores in 2010 than 2009.

Of course, that misses the fact that the offense was much more likely to come away with touchdowns. Broken down by points, Alabama was more than two touchdowns better in the red zone in 2010 (252) as compared to 2009 (237). 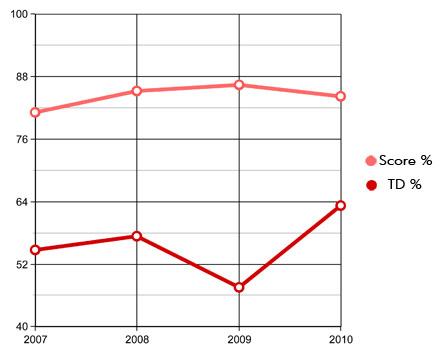 Obviously this is encouraging but it still leaves Alabama in the middle-of-the-pack in the SEC in terms of red zone offense. (My breakdown of every SEC team's offensive red zone performance can be found over at Team Speed Kills) But as long as the defense keeps vying for the best in the country in terms of red zone efficiency, that shouldn't be an insurmountable problem for the Crimson Tide.