Share All sharing options for: Poll: Who Is Alabama's Top 2012 NFL Draft Prospect?

One result of Nick Saban's revitalization of the Alabama football program has been a much more enjoyable April for Crimson Tide fans although it certainly retains it's cruelty. After a decade of watching other SEC team send players into the pro ranks on the first day of the NFL Draft, the tide has turned and Alabama is the school the commissioner invokes with regularity from the podium at Radio City Music Hall.

In the 2011 draft, Alabama saw a school record four players go in the first round and two in the top ten, led by Marcel Darius as the third name called and followed by the No. 6 pick Julio Jones. A total of five Crimson Tide players were selected by pro teams in January which was a step back from 2009 when seven players heard their names called.

It's the harvest of all those top ranked recruiting classes hauled in by Nick Saban and his staff and the difference between his tenure and the past has been dramatic. Here is a look at the total number of Alabama players chosen in the NFL Draft over the past ten years. First round picks are indicated in pink. 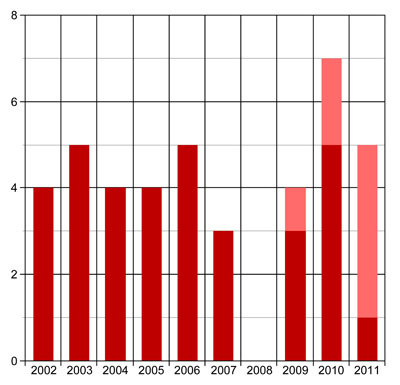 Before Andre Smith was tapped by Cincinnati with the No. 6 pick in the 2009 draft, you would have to go back all the way to 2000 to find a Tide player taken in the first round (there were two, Chris Samuels was taken by the Redskins with the No. 3 pick and Shaun Alexander was chosen by the Seahawks at No. 19).

Already, the prognosticators are eying the Crimson Tide's upperclassmen and trying to figure out which ones will go in the 2012 draft. Alabama's Junior corner Dre Kirkpatrick is already under intense scrutiny and projected as high as No. 7. Trent Richardson, Mark Barron and Courtney Upshaw are popping up on a lot of insanely early mock drafts as well.

So we ask you, which Alabama Crimson Tide player is going to go first in the 2012 NFL Draft?