Share All sharing options for: Howard Schnellenberger and The Alabama Crimson Tide

Yesterday afternoon, legendary coach Howard Schnellenberger announced that this season will be be his last on the sidelines. While the 77-year-old says he intends to stay on with Florida Atlantic University in an administrative capacity, this is certainly the end of an era for the sport. For more than a half century, Schnelly was an unchanging constant for college football, an endeavor marked by it's penchant for change.

Today a fair number of folks are taking a moment to recall Schnellenberger's role in building entire programs from damn near scratch. He arrived in Miami and promised a national championship in five years - then delivered. Louisville and Florida Atlantic revere him nearly as much for taking their programs from nothing to true respectability. 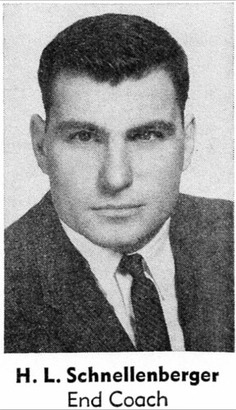 It should not be forgotten then that Howard Schnellenberger was critical in the transformation of Alabama football from the wasteland it found itself in the 1950s into a national championship squad.

Coach Paul W. Bryant was famous for saying he wouldn't hire any assistant who wasn't brighter than himself. "If they're not smarter than me," he once intoned. "I don't need them." And Schnellenberger is one of the earliest examples he wasn't just blowing smoke.

Schnellenberger had caught Bryant's eye in the early 1950s while the Bear was coach at Kentucky. The promising tight end from Lewisville had committed to Indiana but Bryant wasn't having any of it.

The Wildcats coach called in a favor and the governor of Kentucky, Lawrence Weatherby, accompanied Bryant on the recruiting visit to the Schnellenberger home. It convinced Schnellenberger and his father but his mother was still uncertain. Bryant knew Mrs. Schnellenberger was devout Catholic and on his next visit he was accompanied by the Archbishop of the Louisville diocese.

Schnellenberger signed and, in the process, learned a valuable lesson about cut-throat recruiting.

Schnellenberger played under Bryant for two seasons at Kentucky then Bryant left to lead the Texas A&M Aggies in 1954 while Schnellenberger went on to become an All-American in 1955.

"Coach taught me that hard work and sacrifice could get you somewhere in this world," Schnellenberger later said of his time as a player under Bryant. "He set the tone for my whole life."

In 1959 Schnellenberger joined the Kentucky coaching staff as an ends coach under Blanton Collier. After the following season he left to take the same job in Tuscaloosa.

After arriving to take over the Alabama head coaching job in 1958, Bryant took two years taking the Crimson Tide that had endured four losing season including a 17-game losing streak that spanned from the 1954, 1955 and 1956 seasons. By the end of the decade Bama had returned to playing in bowls and Bryant was already making plans for the national championship. He summoned Schnellenberger to make it happen.

It didn't take Schnellenberger long to make an impression. When a hotshot quarterback from the hills of Pennsylvania failed the entrance exams for Maryland the race was on for the services of one Joe Namath. Bryant knew that Schnellenberger's brother was a friend of the young man from Beaver Falls and sent his assistant to get him to Tuscaloosa and convince him to come to Alabama for a visit during fall practice.

Instead of the planned few days, Schnellenberger spent more than a week on the road with just a single change of clothes. It took a few bad checks, an unexpected stopover in Atlanta and perhaps a strategically misplaced pipe to get Joe Namath down to Tuscaloosa for a visit but he pulled it off. From there Bryant had little problem convincing the promising star to sign with the Crimson Tide.

Yet that recruiting victory has always overshadowed Schnellenberger's accomplishments at Alabama. Much as Mal Moore will likely be remembered for hiring Nick Saban rather than mastering the wishbone as the offensive coordinator under Bryant, Schnellenberger's legacy is inescapably defined by his feat of bringing Namath to the Capstone. And both assessments are painfully unfair.

As an assistant coach Schnellenberger had a good eye for undersized but quick players that fit Alabama's approach to offensive line play and, once he got them on campus, he was the master at getting them to realize their unsuspected potential. That line made everything Namath and Stabler accomplished possible.

Then, as offensive coordinator in 1965, Schnellenberger built an attack that relied on the accuracy of oft-overlooked quarterback Steve Sloan. That season Alabama rolled to a 9-1-1 record and claimed the national championship (the third while Schnellenberger was at Alabama) and earned the highest of praises from Bryant.

"This is the greatest offensive team I've ever been around," he said following a 39-28 victory over Nebraska in the Orange Bowl. "They came a long way with probably less ability than any team I've ever had."

After the 1965 season Schnellenberger left Alabama for the pro coaching ranks.After three season as the ends coach for the Los Angeles Rams he decamped for Miami to become the Dolphins offensive coordinator under Don Shula. He was running the offense two years later when the team rolled through the season and claimed the championship without a single loss - an unprecedented and unequaled feat in the league.

After that his time had come to be a head coach and he went on to become a legendary one. And in 1979 he finally returned to the Alabama sideline. On Nov. 17, 1979, in his first year as the coach at Miami, Schnellenberger brought his Hurricanes to Tuscaloosa.

It was the first televised game at Bryant-Denny Stadium and it was a bloodbath for Miami. The Crimson Tide romped to a 30-0 victory that was never really in doubt. Yet Schnellenberger had shown his team what it was like to play against the best in the country, the first step of his five year plan to win the national championship at Miami  - a feat he accomplished a year early.