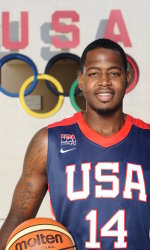 The United States defeated South Korea today in Game 3 of group play at the World University Games in China. Team USA's leading scorer was none other than Bama's own, JaMychal Green, who is impressing on the international stage. Here's part of the official UA release:

JaMychal Green scored a team-high 17 points to lead USA Basketball to a 112-68 win over South Korea on Monday at the World University Games in Shenzhen, China.

The University of Alabama forward added six rebounds in his 14 minutes of action to help the United States improve to 3-0 with two games remaining in pool play before medal quarterfinals begin.

Through three games--all won comfortably by the Americans--Green is averaging a solid 9.3 points and 5.0 rebounds per game, despite averaging only 14 minutes each game.

That last stat--only 14 minutes per game--is cause for concern for Tide hoops fans. Despite his growth and maturity as a player Green seemingly cannot shake his unfortunate penchant for getting into untimely foul trouble. In the first game against Mexico, he picked up 4 fouls in a mere 9 minutes. In the second game against Hungary, he once again went to the bench early with 4 fouls, this time after only 19 minutes.

While Green's foul troubles are something he certainly needs to improve on this season if he's going to carry the load in the post amid high hopes for the Tide, his ability to step up and shine when he is on the court--even alongside the nation's top college basketball players--has to be encouraging for Bama fans this offseason.