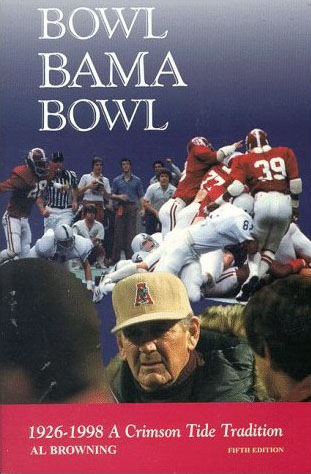 In the 119-year history of Alabama football, the Crimson Tide have played in an NCAA-leading 58 bowl games. To a certain extent the team’s 32-22-3 bowl game record presents a history of the program and so it’s no surprise to find someone has already taken that tack to write it.

Clyde Browning’s book, Bowl Bama Bowl: 1926-1998, A Crimson Tide Tradition is the history of Alabama football told as a tale of post-season contests. It a compelling approach since it gives enough information of the given season to put the bowl game in context as well as offering a unique window into the longer trends that have shaped Alabama football over the decades.

As a former sportswriter for the Tuscaloosa News Browning brings a sure narrative style to the work and as a longtime personal assistant of Coach Bryant he has unique access to information that makes his telling of the tale valuable. The final chapters of Bowl Bama Bowl are bolstered by an incisive series of interviews with Coach Stallings, providing a fitting coda to the span of the story he has chosen to tell.

By focusing on the bowl games themselves, Browning’s book does a great job addressing one of the most vexing problems facing authors attempting to tell the history of Alabama football – there’s just so damn much of it. The high points – particularly the national championships and undefeated seasons – are sufficient in number to crowd out a host of deserving contests. The more bitter moments in the program’s history then tend to get short shrift if they are remembered at all.

Bowl Bama Bowl was initially published in 1972 and then successively updated through 1998. (He later took the same approach in recounting the history of Alabama’s rivalry with Tennessee in his book Third Saturday in October.)  The staggered updating actually helps the book as the first edition was penned early enough to include interviews and commentary by the participants in the Crimson Tide’s first bowl games. The latter updates give a first-hand account of games after the passing of Coach Bryant that are often overlooked due to the triumphs of the earlier era. 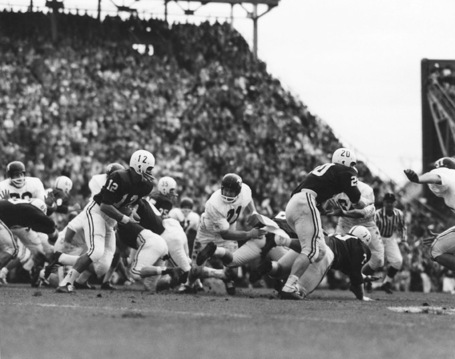 It's a long fascinating journey from Wallace Wade's team that won the 1926 Rose Bowl against Washington to Gene Stalling's squad that was victorious against Michigan in the 1997 Outback Bowl. The whole complexion of the game itself is almost unrecognizable from one point to the other. Flipping through photographs alone is a testament to the changes that transpired in that seven-decade span. But followed season-by-season the journey from then to now seems completely logical.

Bowl Bama Bowl gives some interesting perspectives on long-held beliefs about the Alabama program. One great example is how Coach Bryant came around to the idea of using the wishbone offense in 1971. Usually it’s presented as an epiphany that occurred after Spring practices that year. Bowl Bama Bowl shows the genesis for the transition was most probably in the tie with Oklahoma in the 1970 Astro-Bluebonnet Bowl that ended the prior season.

"Oklahoma ran up and down the field on us for awhile because we didn’t know much about stopping that wishbone offense they were running," Coach Bryant said. And, according to one player, he spent the entire flight back to Tuscaloosa diagramming plays of the innovative offense.

That tie was astride the Crimson Tide’s perplexing eight game run of bowl contests without a victory that ran from 1968 through 1974. As a simple stat that seems perplexing, read as an ongoing narrative gives an understanding of how painful the frustration was for the program – particularly given the degree of talent that the teams boasted. Conveying that is one of the ways this book is important.

Once read completely through, Bowl Bama Bowl is also a fantastic resource on the individual games and the season’s they occurred in. If there’s a list of books that are required reading for Alabama football fans, Bowl Bama Bowl is certainly high on it.