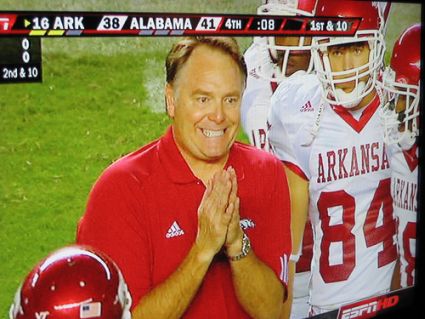 ed. - Though this is a relatively recent win, there was a request for this play last week and it's one of my fondest Bama memories that I was in the stadium for, so I figured I'd honor that request.

Alabama fans know we have a peculiar relationship with Arkansas. Though not quite a true rivalry game, it's one we circle on our calendars regardless given the often "anything goes" nature of the game. Last second wins, multi-overtime battles and simple kicks that. Just. Won't. Go. Through. The. Uprights all characterize our annual battles with Arkansas. Shula turned in a 1-3 record against the Razorbacks and frankly, they were starting to get on my nerves with their repeated wins over us. 2007 was the first year of the Saban Administration and while we knew we'd gotten a mega coaching upgrade, we still needed a couple of recruiting cycles to get our on the field talent to match our on the sideline talent.

Arkansas had an absolutely lethal running back tandem in Darren McFadden and Felix Jones. There was little to no drop off when Jones was in the game instead of McFadden and you'd typically have to weather the storm they brought and/or put up a decent amount of points to beat them. They were a mere eight yards shy of a combined 3,000 yards rushing that season and combined for over another 300 yards receiving. Not to mention they had 28 TDs between them.

The good news for Arkansas' opponents that year is that their defense was suspect. Eight of their thirteen opponents that season scored 26 points or more on them with three teams passing the 40 point barrier. The five teams held under 26 points? Ole Miss, Auburn, North Texas, UT-Chattanooga and Florida International. Not exactly a murder's row.

Arkansas' lack of defense set the stage for a stellar first quarter from Alabama where the Tide took a 21-0 lead on two John Parker Wilson TD passes and a rushing TD from Glen Coffee. Arkansas chipped away at the lead in the second quarter and held Alabama scoreless to go into halftime trailing 10-21.

If there's anything the Nick Saban era has taught us at Alabama, it is to play a total 60 minutes and to finish opponents off and not let them back in the game. The 21-0 lead of the first quarter looked like what people hoped Nick Saban football at Alabama would look like. The Tide extended their lead to 21 again with five minutes left in the quarter but Arkansas orchestrated a quick 61 yard drive that took around two minutes to cut the lead to 31-17. John Parker Wilson fumbled on Alabama's next possession setting up a short field for Arkansas that they capitalized on. The Razorbacks were now only a touchdown behind (31-24) mere seconds into the fourth quarter.

JPW was intercepted on the first play of the following drive and Arkansas was in position to tie the game with a first and ten from the Alabama 26. Six rushing plays later (four from McFadden and two from Jones) and Arkansas had tied the game 31-31. Twice in this game Alabama had built up 21 point leads and twice they'd let it slip away. With 12 minutes to go in the contest, I think we all felt a wild ending was likely in the cards.  After a three and out from Alabama, Arkansas put together another explosively quick drive. Six plays, 64 yards, two minutes and twenty-two seconds: touchdown. Arkansas has their first lead of the night and are up 38-31.

I'm not even going to lie. At this point, I figured we'd blown it. Our offense was looking sluggish, our defense was exhausted from being on the field so much, we were turning the ball over and we hadn't put any points on the board since midway through the third quarter. With eight minutes left in the game, Alabama works its way down the field in chunks: 5 yards here, 8 yards there, 16 yards on a pass play, etc. The drive stalls after 46 yards and 12 plays and faced with a fourth and six with about four and half minutes to play, Nick Saban makes a decision that was a bit of a head scratcher at the time. He goes for a 42 yard field goal. It looks genius in hindsight, but McFadden and Jones were running us ragged, they'd stopped our offense cold and we were going for a FG that wasn't exactly a chip shot? Whatever you say coach. 38-34 Arkansas.

McFadden had suffered a mild concussion on the previous series, but that still meant we had to face Felix Jones and Michael Smith. After allowing one first down, the Bama defense steps up and forces and Arkansas punt.

Alabama started the drive on their own 26 and the John Parker Wilson and Matt Caddell show began. Caddell had receptions of 20 yards and 10 yards on the first two plays of the drive. Caddell picks up another 9 yards on the third play of the drive.

And then the controversy begins: Arkansas commits two pass interference penalties in the next four plays for a total of 21 yards. Arkansas fans are besides themselves considering at least one of those to have been a soft call. At this point, Alabama has a first and 10 on the Arkansas 13 and Wilson hit Keith Brown for 9 yards on first down to make it 2nd and 1 on the Arkansas four. Wilson's second down attempt to Mike McCoy was incomplete. On 3rd and 1 lined up on the right hash mark, Wilson takes the snap and never takes his eyes off of Caddell who is streaking towards the left corner of the endzone. Wilson lobs it up and Caddell makes the leaping grab to put Alabama ahead 41-38 and to cement the first memorable and great win of the Saban era. Let's watch the play:

Alabama never mounted a fourth quarter comeback under Mike Shula so this victory was something Bama fans hadn't experienced in quite some time. Wilson had a big day that day going 24 of 45 for 327 yards and 4 TDs. The Alabama defense somehow weathered the McFadden and Jones storm (they had 195 yards/2 TDs and 96 yards/0 TDs between them.) While it wasn't the prettiest of wins or necessarily how you want to win a game, it was a game that invigorated the fanbase and gave the players confidence that they could win big games late. The 2007 season was far from perfect seeing as we went 7-6, but this game is the one to me that put the SEC on notice that big changes were coming to Tuscaloosa sooner than later.