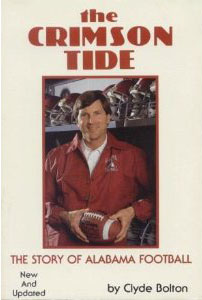 The worst thing about Clyde Bolton’s book on the history of Alabama football, The Crimson Tide, has to be the cover. The 1987 version of the book boasts the grinning visage of Bill Curry – not exactly the standard of excellence the former Birmingham News sportswriter was trying to convey in his tome.

Luckily, the cover of the paperback edition rips off very cleanly and the quality of the book improves tremendously from that point on. In fact, this is one of the best books about Alabama football I’ve ever read.

The Crimson Tide starts at the beginning, telling the tale of William G. Little, the Massachusetts prep student who came home to the University of Alabama to study law and brought the game of football with him. From there Bolton takes you on a brisk but not hurried tour of the history of the program up till the tenure of the aforementioned Curry.

Bolton takes you through Rose Bowl era of Wallace Wade and Frank Thomas, the slide into mediocrity with Red Drew and then the descent into disaster with "Ears" Whitworth. About half the book covers the return of Paul W. Bryant and the quarter century of dominance which, given the fact it was first printed in 1972 and then updated a decade later, makes sense.

Where The Crimson Tide stands out from the usual football histories is how Bolton intersperses the narrative with interviews of important characters to the story. These recollections from people like Bully Van de Graff, Fred Sington and Red Drew cast an authenticity to the tale by providing the main characters the luxury of perspective about their achievements. 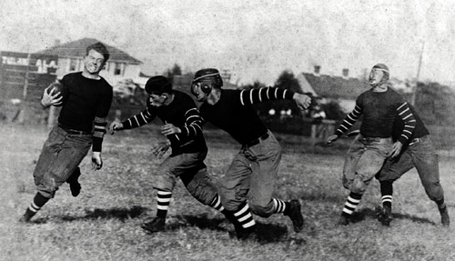 Coach JWH Pollard devised and made the unique
headgear/mouthpiece for the Bama players.

What really makes The Crimson Tide stand apart from most books about Alabama football is Bolton’s skills as a reporter and writer. He has a natural eye for detail and sense of narrative. He’s not trying to unearth the deeper truth in his subject, just tell the story in front of him. What makes this effort shine is he also is blessed with an almost lost talent for metaphor.

I also have to admit that it’s oddly pleasant to read a book that eschews a lot of the now accepted elements of the narrative (the "mama called" comment, for example). It’s not a question of omission, Bolton simply was writing as these legends were still being hammered into their accepted forms.

If there’s any real criticism of the work it’s the almost complete absence of the issue of segregation. The controversy surrounding the 1970 USC game (not to mention the 1959 Liberty Bowl) and are important milestones in the program’s history and deserve mention.

This is disappointing because Bolton does a very good job handling the lawsuit against the Saturday Evening Post. He covers the incident in a thorough manner but keeps it concise so it doesn’t draw away from the narrative. By not addressing the issue of black players on the Alabama roster, Bolton passes up an opportunity that took years for other writers to address properly.

Still, while there are some superb books written about parts of Alabama football there are painfully few good ones that take on the entire scope of the program’s history. Among that number, The Crimson Tide is almost certainly at the very top.