Share All sharing options for: A Quick Review of the RBR Community Guidelines (Which Totally Exist We Promise) 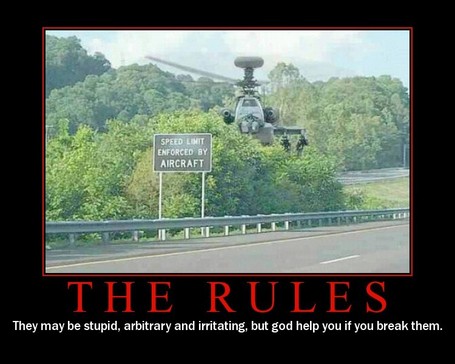 Ok folks, with the season almost here and the subsequent boost in traffic and new members that it always brings we felt it was time to put together a quick post laying out the (admittedly loose) guidelines we try to go by here at RBR as an intro for any n00bs and a refresher course for the old hands.

Since we currently have a one day waiting period for new members to comment, do yourselves a favor and spend that time familiarizing yourselves with the blog; what kind of topics we discuss, the general tone of the comments, how certain issues are addressed, and etc.  A few posts have already been written that will ease any new members into using the SBN platform, so I'll simply link them instead of rehashing it all:

Once you're familiar with the basics of how the blog works and are ready to begin posting, keep a few things in mind:

First and foremost, we're all about value here.  If you don't add any to the discussion, keep it to yourself.  You will find plenty of posts with comment threads that went from sober analysis to jokes (lot and lots of jokes), arguments, and a general streams of consciousness journey down the rabbit hole, and that's fine.  SBN was built around the idea of these blogs providing a "community" feel to its members, so we're pretty loose as far as what gets discussed so long as its a legitimate running conversation. To put it another way, no one's going to enjoy going to the Waffle House with their friends to get some coffee and talk about football if one of the waitresses is looking over their shoulders the whole time and forcing them to stay on topic.  By that same logic, though, no one is going to invite you to the Waffle House with them for coffee and football talk if all you do is yell "first!" the moment you sit down and then not contribute to the conversation in any meaningful way beyond "LOL" or "yall r dumb."

New folks, before wading in take a day or so to read the comments (especially the lengthier threads) to get a feel for them, because you will get hazed.  RBR has been around since 2006 and there are plenty of people who have been commenting for years and have come to expect a certain level of discourse when coming here.

For the old hands, be patient.  Just because a commenter is new it doesn't mean they're an idiot that's going to ruin RBR.  Help them get the hang of things and try to be nice as best you can.

- Threats/Personal Attacks: This is one area that will absolutely not be tolerated.  Take your anonymous internet hero self elsewhere, because this is autoban territory and there will be no recourse.  I don't care if it was "the heat of the moment," there is no excuse for attacking someone personally or threatening them over a blog post.  We're all Bama fans here.  We don't have to agree on everything, but make sure you actually have an opinion and not just some bullying rhetoric before spouting off. This includes the use of racial slurs or any other form of bigotry (sexism, attacks on religious or political beliefs, etc.) to try and "win" your argument.  If you see this sort of thing happening, flag it (or even better e-mail us a link to it at rollbamaroll@gmail.com) so we can take appropriate action.

- Profanity/Vulgarity: We're all adults and pretty much everyone on here has a, shall we say risque, sense of humor, but let's keep it PG13.  Outright cursing should be avoided (though WTF or #$&% are perfectly acceptable substitutes), as well as posting nude/might as well be nude pictures or exceptionally foul jokes or anecdotes.  Lord knows we're juvenile enough with all the #TWSS and clever(?) puns, so let's at least keep things reasonably family friendly and welcoming to everyone. In other words, if you wouldn't want your mom reading it, don't post it.  We're not interested in censoring anyone, but if threads take a turn towards the uncomfortable we reserve the right to close the comments and/or delete the whole thing.  The one and only exception to the profanity rule is on game day, but we'll discuss that further below.

- Don't go trolling other SBN sites: We have a policy here that if you cause enough trouble at another SBN site to get yourself banned we'll ban you here for at least a week as well if that site's administrators ask us to.  That might not seem fair, but look at it from our point of view: trolling and stirring up trouble at another blog is the quickest way to get their trolls over here, and we don't need that noise.  We obviously can't control what blogs you read or how you choose to comment on them, but if it starts affecting us here at RBR then you're our problem, too, and we'll act accordingly.

Over on the right sidebar you'll see two sections called "Fanpost" and "Fanshots."  These are ways in which members can contribute their own posts to the site.  The quick gist: If it's anything of length put it in a fanpost.  There is a 75 word minimum for fanposts, and that does not mean ask a one sentence question and then type "Roll Tide" over and over again until you get to 75 words.  If it's just a quick blurb such as a quote, an image, a video, or a link, put it in a fanshot.  For the most part all we ask is that it be reasonably well written with some thought behind it, but keep a few things in mind:

- This is not a message board, so rumor posts will more than likely be deleted.  Anyone can link to your "my friend saw X at Y and blah blah blah" post and say "I saw over at Roll Bama Roll where...," and we're simply not interested in banking our own personal credibility on whatever unsubstantiated gossip an anonymous stranger on the internet feels like spreading.  There can be exceptions to this (for example, a fanpost offering well thought out commentary on something as mainstream as Danny Sheridan's recent appearances on Finebaum), but we have no desire to see the fanposts section turn into the al.com message boards.

- By that same token, don't use the fanshots to simply link to stupid rumors or salacious content on message boards/Sports by Brooks/Bleacher Report/Deadspin/etc for laughs. They don't need our help publicizing the idiotic things they do, so links will either be deleted or turned into a rickroll.

- Do not post other people's material: if you come across an article, stories, quote, video, or picture that's relevant to the community, the fanshots are your friend. Always provide a link back to the original source, and adding your own comments is encouraged.  DO NOT simply cut and paste the whole thing into a fanpost.  That will be deleted instantly.

- Whatever you post, make sure its somewhat relevant to the community and will generate discussion: We don't mind the fanposts/shots being used for off topic stuff like movies/music/books/whatever.  We've had plenty of fun with movie quotes and top ten threads (heck, we've got a "Greatest American Guitar Solo" thread going as we speak) because those things are pretty universal and allow the members of the blog to get to know each other better, but we're not interested in divisive topics like politics and religion or obscure topics that only you are interested in.  Again, let's be as welcoming and friendly as possible to everyone.

- Make sure you're not posting on a topic that's already been discussed: There's nothing more annoying than seeing a fanpost asking questions that were already addressed in a post the day before.  Scroll through the main page and make sure there are no other front page posts, fanposts, or fanshots talking about it already.  If there is, simply join in that discussion.  There is also a "search" box at the top right hand of the blog, so if you're just looking for an answer to a quick question, try it first.  If we do run into multiple fanshots covering the same topic, we'll use our best judgement on which ones need to be deleted.  Pro tip: if you want yours to be the one that stays (and even be promoted to the front page), add some decent commentary to it.  We also reserve the right to add our own commentary if we choose to promote it to the front page.

- No spam or advertising unless it's first cleared by an admin: If you're looking for ad space, SBN has reasonable rates and you can e-mail us so we can put you in touch with the right people.  If you're a local group that is looking to promote a specific event that is relevant to our community, e-mail us first.  We're happy to help out local groups so long as its something relevant (i.e. Well That's Cool's events around Tuscaloosa), but we consider them on a case by case basis and if it isn't cleared with us first it will be considered unwanted spam and deleted immediately.

For the uninitiated, these things can turn into a free for all very quickly.  Game day is an emotional experience, and there is absolutely no way we're going to sacrifice our own enjoyment of the game to monitor what y'all are doing.  Cursing is allowed in these threads, but do us a couple of favors:

- Keep them as on topic as much possible. The middle of the 3rd quarter is not the time to start asking for movie recs or wondering what Britney Spears is up to.

- Though cursing is allowed, don't act like a six year old who just heard his first F-bomb.  There's no need to go over the top with it just because you can.

- If you're easily offended by profanity do us all a favor and skip the game threads.

- The same rules about personal attacks/threats applies to the game threads.  "The heat of the moment' is no excuse.

- Pictures and animated gifs will not be allowed in the game threads.  Because the SBN comments auto refresh after about 100 comments or so the system is already slowing down, and having to constantly reload those images just makes it that much worse.  We'll do a separate silly thread for after the game for that kind of stuff, but please refrain from using them during the actual game threads.

So that about covers it, but to sum up 1) don't be a jerk, 2) lighten up Francis, and 3) this is supposed to be fun for everyone involved.  Keep that in mind we should all get along.