Share All sharing options for: The RBR Film Room: Third Down Pass Pressure

As we get ready for welcoming the delight of Alabama football back into our lives again, the fact of the matter is we've had a long long off-season since the last time we watched any serious gridiron action. Our football-watching skills have atrophied and we don't have much time to get back into top form. To help us a little, I've put together this little piece that breaks down a defensive play from last year.

This analysis breaks down Dre Kirkpatrick's interception in the second quarter of the Florida game at Bryant-Denny Stadium. The point of this exercise it to demonstrate how the packages cooked up by Kirby Smart to bring pressure along the line plays into the strengths of Coach Saban's beloved defensive secondary. There's a reason these guys keep leading the league in picks, and the pressure brought by the front seven is a big part of it.

If you picked up our season preview magazine and read Todd's article on the Crimson Tide's version of the 3-4 defense, you'd know that Smart uses it to present a ton of different looks and alignments that keep the offenses guessing. Its adaptability allows Smart to pick an almost unlimited number of places to bring pressure and damned if he doesn't try to use them all.

Now the No. 1 rule of Coach Saban's defense is to stop the run. While we have legitimate concerns about the relative lack of sacks and tackles for loss last season, there is more than a little bit of truth to the observation that this defensive scheme doesn't put as much emphasis on getting to the passer. If the defense has put the opposing offense into a third-and-long situation, they have done their job.

Once the rushing attack has been stymied and passing is the only option left, the idea is to force the offense to put the ball where we prefer it to go - into the loving embrace of our defensive secondary. Success on third downs is a hallmark of the Crimson Tide under Coach Saban so let's look at an example of what makes the whole concept at work.

This particular play occurs halfway through the second quarter of the Florida game last season. At this point the Gators hadn't been able to get a hell of a lot of momentum going. Their first possession was an impressive 70-yard first drive that stalled on the goal line then ended abruptly with an end zone interception. The second possesions was a three-and-out. Now down 17 points Florida had to stay on the attack if they want to stay in the game.

For the drive in question, Alabama's defense had stymied the Gator's offensive efforts on the first two downs leading to a third and way long situation from their own 27-yard-line. Florida sets up for the pass with four wide and a compact line ready to protect QB John Brantley. The Crimson Tide counters with the nickel package (five defensive backs) that presents three down linemen and a host of uncertainty for the offense. 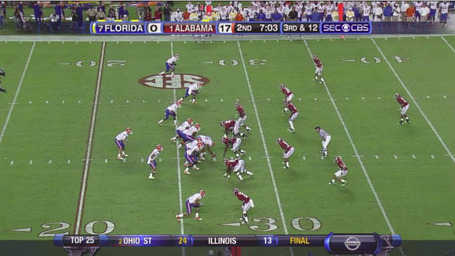 Before things get too confusing, let's identify a few folks we'll be concentrating on in this sequence... 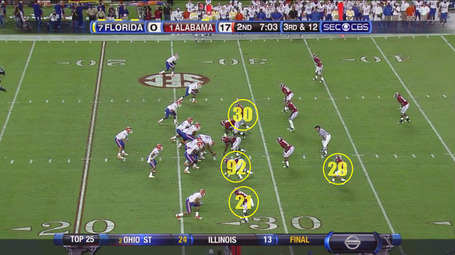 Cornerback Dre Kirkpatrick (21) is playing the receiver pretty close to the line at the bottom of the play. Damion Square (92) is the defensive end nearest to him. The key linebacker to watch is Don'ta Hightower (30) who seems to be threatening to come in off the edge. Defensive back Will Lowery (29) is about five yard off the line of scrimmage. Then, right before the ball is snapped, Alabama changes things up a bit. 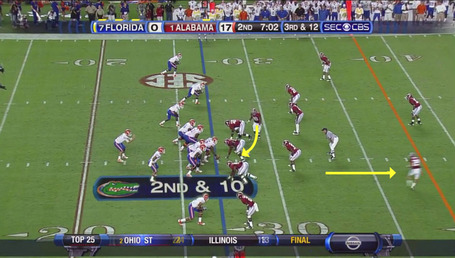 Hightower starts moving down the line heading toward the point where he's actually intending to bring the pressure, in the slot between Square and Marcell Dareus who is playing nose tackle. The offense, obviously, doesn't know that yet giving him a slight advantage of surprise. Lowery drops back signaling Bama will be in zone coverage for this play. (Yes, the fact the CBS field graphic reads 2nd Down when it's actually 3rd is befuddling to me as well.) 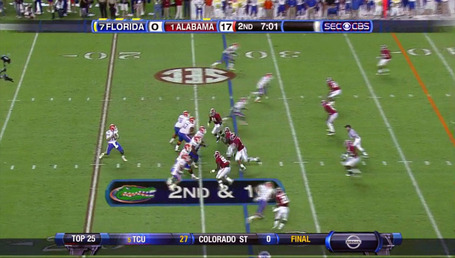 Once the ball is snapped, things get interesting extremely quickly. Kirkpatrick engages the receiver and Hightower has built up a nice head of steam heading at the Florida offensive line. It might be worth mentioning at this point that on the previous play, Courtney Upshaw had chased Brantley down and driven him into the turf with his usual gusto. The result is the Gator quarterback hasn't been able to get in a rhythm and Alabama isn't looking to let him start on this play. 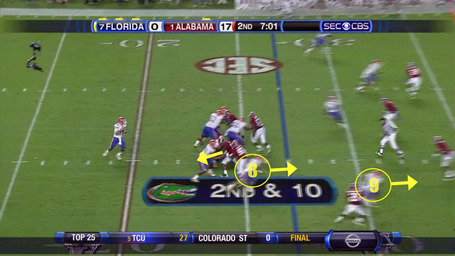 Now things get really interesting. Square hesitates a moment and Hightower steps through and engages both linemen on the right side of the Gator line. Florida's Trey Burton (8), who had been lined up in the backfield, runs by untouched on the outside. He's going to head another five yards downfield, stop, and turn to wait for the ball. Kirkpatrick lets Gator wide receiver Carl Moore (9) move past him and down into the hinterlands now being patrolled by Lowery. 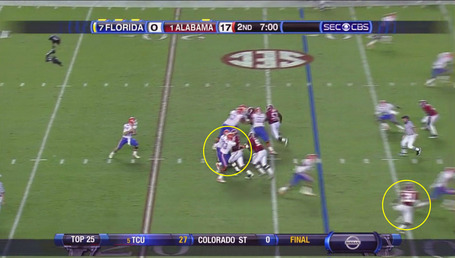 It is at this point that Kirby Smart's plan becomes clear. Hightower isn't the one intended to put the pressure on the quarterback. Instead it's Square who now has an opening to push through the offensive line and collapse the pocket. (I'll also note that Dareus and Courtney Upshaw have succeeded in pull a nice crossing of assignments on the far side of the line as well during all this.) This is a regular four-man rush but designed to try and find a numerical mismatch using deception.

Meanwhile, Kirkpatrick is now fully committed to covering his zone but keeps moving downfield (and thence out of the view of the camera). Moore is moving out of Kirkpatrick's area and into Lowery's domain so the Bama cornerback prepares to handle Burton who is now the main offensive target lurking in his zone of the field. 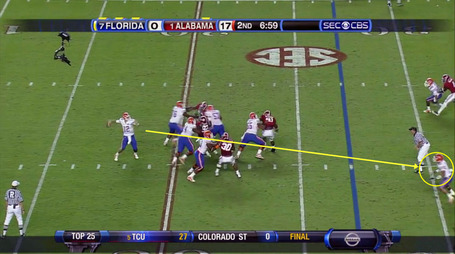 Square's progress toward the Florida quarterback becomes impeded rather quickly but Brantley is feeling the pressure as the pocket is evaporating with every moment he holds onto the ball. Alabama's nickle coverage scheme has ensured there's a paucity of places to put the ball downfield so Brantley starts looking for alternatives. And, lo, there is Burton in the flat just waiting for the dump off pass. It isn't going to get the first down yardage but it's not a sack either. Brantley makes his decision and cocks his arm to throw. 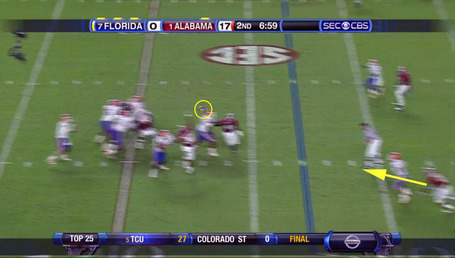 The problem is this pass is nowhere near as safe as the Florida quarterback assumes. Kirkpatrick is behind Burton but waiting for the pass to be thrown so he can jump the route. Once Brantley puts the ball in the air, the Bama defensive back makes his move. 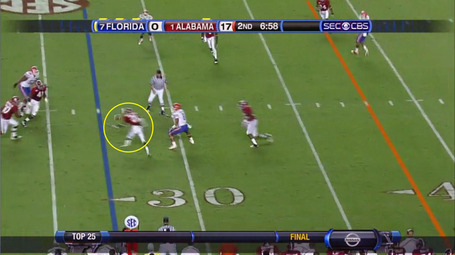 A moment later Kirkpatrick leaps in the way of the pass, bats it away from Burton and snags it out of the air. Interception. Alabama's ball and the possibility of the Gator's coming back have pretty much gone up in smoke at that point.

With five offensive linemen and four pass rushers, the likelihood of getting a sack on this play was low from the start. But by bringing pressure from an unexpected spot, the defense was able to keep Brantley off balance and force him to make a decision that he quickly regretted. Maybe this wouldn't have worked as well on a more collected quarterback but, then, Smart would have had the option of putting heavier pressure using one of his diabolical blitz schemes.

Still, the fact that Florida's offensive line reacted to the stratagem and kept both Hightower and Square at bay is a testament to their ability. Brantley has time here but the unexpected pressure from Square results in him taking advantage of a "safe" option that, in reality, wasn't that safe at all.