Share All sharing options for: Loss of QB Targets Gunner Kiel and Jameis Winston Leads to Desperation Recruiting for the Tide

I know there's been a lot of wailing and gnashing of teeth over the loss of top QB targets Gunner Kiel and Jameis Winston to Indiana and Florida State, but to be perfectly honest I haven't been too terribly upset over it.  Look, we all knew that making Kiel our top QB priority was likely to cost us Winston, but the fact remains that Kiel fits the "pocket passer" model we want more than Winston, and there's an incredibly high likelihood that had we done everything we could to keep Winston in state he would have still hopped in the dump truck full of money that some MLB team is going to back up to his house and ride off into that sunset without ever seeing the practice field in Tuscaloosa. Kiel was the bigger risk, but he had the greatest reward, and unfortunately we lost that particular gamble. It happens, and the brutal fact remains that until we can take a super stud QB recruit like A.J. McCarron or Phillip Sims and develop them into a legit, high round NFL Draft prospect, there's always going to be a QB guru like Jimbo Fisher or Kevin Wilson that can sell pro development at their program while assuring them that if they go to Bama "you'll be handing the ball off 75% of the time and the other 25% you'll be throwing screens."  So I had pretty well resigned myself to landing some three or four star kid that's got decent talent before National Signing Day, if only to have another arm in camp, then next year we'll be able to sell playing time to another super star and life will go on.  Of course, that was before I wandered over to TideSports.com a few minutes ago and noticed that we are apparently recruiting Justin Bieber: 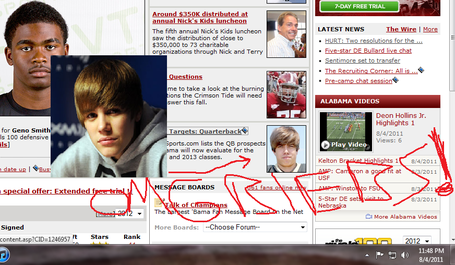 First off, I'm just as shocked as you are that Justin Bieber is considered a legit BCS QB prospect - I didn't even know the kid played football! - but here we are.  Since I don't have a Rivals account, I'm not able to get behind the paywall to see what all they're saying about him, and a quick Google search didn't turn up anything regarding the Biebs and his quest for collegiate gridiron glory.  But obviously that's him, because it looks like him, and since I'm from the Sports by Brooks school of journalism, that's good enough for me.  All I can say is I hope the staff knows what they're doing by targeting him.