With the heat index hitting triple digits in Tuscaloosa, the Alabama football team returned to the practice fields this afternoon as fall camp continued into day two. After splitting up the workouts yesterday into a veteran afternoon practice session held outdoors in the heat and an underclassmen session held last night in the Hank Crisp Indoor Facility, today marked the first full squad session of fall camp.

For now there is still no official word on Duron Carter, and nothing official is expected over the weekend. His transcripts had to be re-sent to Tuscaloosa, and a decision apparently will not come before Monday. There was talk earlier today that the Carter family hoped the process would be resolved by this upcoming Wednesday, but clearly there is no guarantee of anything at this point. For what it's worth the problem seems to be largely administrative in nature and there seems to be an underlying sense that things will be successfully resolved in the end, but even so Carter is missing valuable practice reps. Even if he is cleared sometime this upcoming Wednesday, he will still have missed the first four practice sessions of fall camp.

Likewise, Danny Woodson, Jr. also remains absent from fall camp, and unlike Carter there does not seem to be the same optimism or urgency surrounding his status. While obviously we all hope otherwise, for the time being the general consensus seems to be that Woodson may be on the outside looking in.

Tailback remains a closely-observed position, and to that end Blake Sims actually took some hand-offs last night at tailback (though he spent the other two practice sessions at quarterback).  Furthermore, as Nick Saban indicated yesterday, true freshman athlete Christion Jones took some reps at tailback in the practice session today. With Richardson, Lacy, Fowler, and now Calloway firmly entrenched as a four-deep rotation, the concerns at tailback are likely exaggerated a bit at this point, and truth be told none of these players look to see a meaningful snap this season barring a severe run of injuries further up the depth chart. Nevertheless, fall camp is a long, grueling process, and at some point you just need bodies to be able to properly split up the practice reps. Based on that, it's probably best not to make too much over any short-term moves at tailback, though it can probably be expected that another player or two will get a look at tailback in the coming days.

Left tackle was somewhat open today with Barrett Jones missing practice to participate in the joint spring and summer UA commencement ceremony, and in his absence redshirt junior Tyler Love saw more snaps. Love actually looks to have bulked up a bit, and he is in need of a strong fall camp after a concussion curtailed his spring. Jones' absence also gave some additional reps to Cyrus Kouandjio, who absolutely looks the part with a 6'6 frame that carries 300+ pounds without almost no visible fat.

One of the interesting things to watch during fall camp, after an offseason in the strength and conditioning program, is the development of body types with certain players, something of particular importance simply because pure physical build so greatly dictates not only where a player will play but also how well he will perform. To that end, several players stand out on an initial glance. Brent Calloway, for example, arrived with a long, lean frame; you can forget any short-term chances of him ending up at linebacker, he'll need to add significant weight to play in the 3-4. On the other end of the spectrum, Jeoffrey Pagan left any hopes of playing Jack linebacker in his hometown, he's added significant weight and will clearly be a defensive end at UA. D.J. Pettway is even bigger, and in time I'd wager he'll be a candidate to play the combo end-tackle position (and he may play that even now). Brandon Lewis continues to add weight, and at this point he looks more like a nose guard than an end, and with two years of eligibility remaining he could help shore up depth along the defensive interior. Unfortunately, even after a healthy offseason, Dre Kirkpatrick still looks like a human bean pole, despite having a well-defined physique, so any hopes of him bulking up significantly and becoming more of a physical player outside are likely dashed.

And speaking of physical builds, one player immediately jumps out of the incoming crop, true freshman defensive end LaMichael Fanning. At 6'7 and roughly 300 pounds, Fanning carries the weight well, and on initial glance just looks like someone built for the sole purpose of playing defensive end in the 3-4. This photo of Fanning courtesy of 247 Sports: 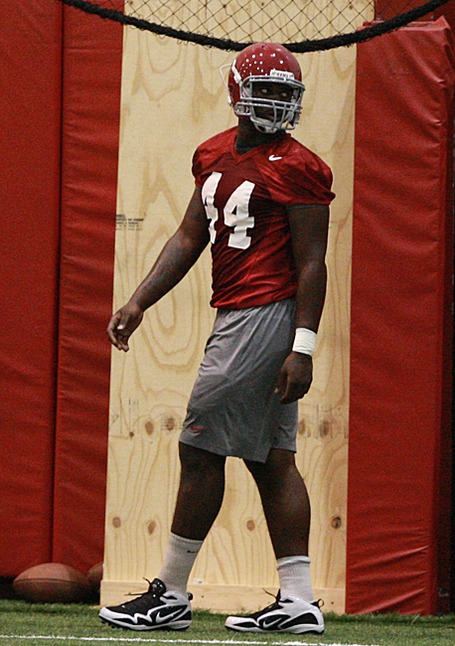 Fanning drew rave reviews from most observers of summer workouts, and it's not hard to see why. The obvious caveat is that with true freshmen you always have to wait until pads go on before you can reach any meaningful conclusions, but if Fanning can even play remotely as well as he looks the competition at defensive end between Ed Stinson and Quinton Dial may get far more dicey in the coming weeks. He may play like Athena come next Saturday, but in shorts he damn sure looks like Zeus.

True freshmen wide receivers Marvin Shinn and Bradley Sylve have shown their athleticism in the early stages of fall camp, and given that it's relatively easy to see why both were so heavily recruited. Shinn still needs to add some weight to his frame, but both have looked solid to date. Again, though, you have to wait until the pads go on. Both get off the line just fine in helmets and shorts, but it's always the physical play of the opposing secondaries that give problems to young wide receivers, and only time will tell how Shinn and Sylve perform in those circumstances. For more proven commodities, though, pay close attention to DeAndrew White, who has already been singled out by Nick Saban for his play. With Darius Hanks forced to sit the first two games of the season due to NCAA medical redshirt rules, you can likely expect that White will be an every-down player against Kent State and Penn State.

Another returning player to keep your eye on moving forward is Kellen Williams. He is taking reps at the center position with the second team offensive line, and several players have spoken highly of his play and his work ethic this fall, including starting center William Vlachos. Williams has long since been a staff favorite due to his versatility, and at 6'3 and 305 pounds he would bring additional size to the center position. Obviously some other players will fight him hard in the next twelve months, but for the time being the smart money is likely on Williams being the heir apparent to Vlachos at center in 2012.

All in all, clearly fall camp is still in its early stages but for the most part things seem to be going well. With a few exceptions there seems to be little in the way of injury concerns at this moment, and fortunately no one has been injured to date or experienced any heat-related issues so far this fall. The raw talent and the conditioning are clearly there, and moving forward it's just a matter of hopefully staying healthy, building further as a team, and hopefully resolving several key position battles throughout the roster.

'Bama will return to practice tomorrow afternoon in Bryant-Denny Stadium, which will be concluded by Fan Day at the stadium.