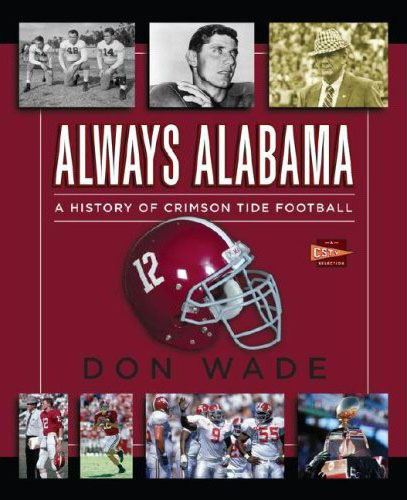 The format of Don Wade’s 2006 book, Always Alabama: A History of Crimson Tide Football, suggests the selling point of the tome will be the photographs. In this instance, though, you really need to purchase it for the articles.

This is a very well written account of the 119-year history of gridiron at The Capstone and that’s probably because Wade knows what he’s doing. As longtime sportswriter for the Memphis Commercial Appeal, he’s clearly familiar with the subject matter but he then bolsters that with solid reporting and interviewing. Although he takes a few chances with the way he’s constructed the book, it works because the foundation of the effort are so firmly set.

The book was published in 2006 and so it gives, perhaps, an overly rosy assessment on the Mike Shula regime and the quality of play provided by Brodie Croyle. Aside from that, I’m hard pressed to really find much wrong with this effort.

The first thing you notice about Always Alabama is that it abandons a straight linear chronology and tells the tale of Alabama football more by subject matter. This would have been disaster in the hands of a lesser writer but it works here.

Wade has taken care in deciding what parts of Alabama football history he intends to highlight and then frames the history around that. The approach is effective because it is a compelling way to tell a story you probably know all the key parts by heart when you pick the book up to begin with.

So, for example, you have whole decades summarized very briefly and then one single game, the 1979 Sugar Bowl game against Penn State, depicted in play-by-play detail. The unconventional arrangement gives it an unexpected freshness but it works because it makes the specific point Wade is trying to convey (in this case it is that the Goal Line Stand was just one of several critical plays in that epic contest not the least of which being Don McNeal's stop of Scott Fitzkee on the 2-yard-line).

Wade takes that same approach in terms of the players. There is a serious effort in Always Alabama to include information about all the standouts but the focus is a little different than most books on Alabama football.

For example: Joe Namath and Ken Stabler are in evidence, as you should well expect, but they aren’t given the limelight like in most histories. Wade knows their stars shine bright enough already and he focuses more of his attention showing the other standouts who often are overlooked in the glare.

Importantly, no key controversy is overlooked – such as the integration of the program and The Saturday Evening Post lawsuit – but neither are they allowed to interrupt the flow of the story.

In fact, Always Alabama presents one of the best accounts of the uncertainty in the program during the 1980s after Coach Bryant’s passing and the turmoil that followed Coach Stallings resignation. Wade’s recounting of these periods rely on first hand interviews and, as a result, are far more authoritative than almost any other version of these episodes available thus far.

And Wade’s keen eye for the appropriate quote certainly doesn’t hurt the enterprise in the least. After recounting the tribulations of the program between 1983 and 1990, he puts it all in a neat little package with one comment by Coach Bryant’s longtime secretary Linda Knowles"

"I don’t talk about the Perkins and Curry years," she said. "Coach Stallings return was very unifying."

And that, as they say, is all that needs to be said about that.

The sheer amount of first-person interviews is a hallmark of Always Alabama. Wade has gone out and talked to the ex-players, ex-coaches and a host of other folks who are salient to the story. Then he uses their comments to underscore the events he is describing. And when he doesn’t have that one-on-one interview, he’s explicit about where his quote comes from.

The photographs are also carefully chosen and placed. They seem to be part of the ongoing flow of the narrative rather than a separate telling of the tale in progress. This isn’t a coffee table book at all. It’s meant to be read and read thoroughly.

Always Alabama does something almost unheard of for books about the Crimson Tide, it finds a way to tell the story in a new and refreshing way. And for that alone it deserves to be on your bookshelf.

Next week: The Boys of Autumn/We Believe...