What if one throw was not just a game-changer, but a career changer? Yes, that description is a bit of hyperbole, but few throws AJ McCarron tosses in his tenure in Tuscaloosa will have a greater potential impact than his first quarter touchdown pass to Michael Williams against Penn State. Let's take a closer look at the film.

Facing a 3rd and 3 from the Penn State 5-yard line, trailing the Nittany Lions 3-0, Alabama lines up in the shotgun, even though the personnel package itself is really just a variation of the base two tight end set. The two tight ends, Michael Williams and Brad Smelley, line up to the offensive right, with two wide receivers split out wide to the left. Trent Richardson lines up alongside McCarron, but motions out wide to the right side of the formation as 'Bama shifts into a five-wide, empty-back set right before the snap.

Penn State responds defensively with their base 4-3 set. 'Bama fans have grown accustomed to complex defensive looks under Nick Saban, but the Nittany Lions provide no such thing on this occasion. Three cornerbacks are in the game with a single safety over the top. The three linebackers line up almost five yards off the line of scrimmage, and it seems clear from the pre-snap look that the linemen will rush upfield and the linebackers will drop into zone coverage. 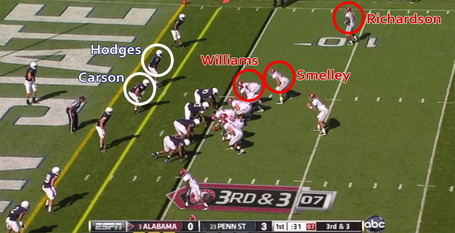 When the football is snapped and the play call unfolds, this is effectively a two-man route to the tight ends. Trent Richardson moves forward at the snap, but he does not run a clearly defined route and is quite obviously just being used for the purposes of a de facto decoy to occupy the cornerback. He's never a viable option on this play.

The real action here is the routes of the two tight ends and how they interact with Penn State middle linebacker Glen Carson (40) and outside linebacker Gerald Hodges (6). All three PSU linebackers drop into a short zone, with Williams running into the zone occupied by Carson and Smelley heading to the boundary, which is the responsibility of Hodges. 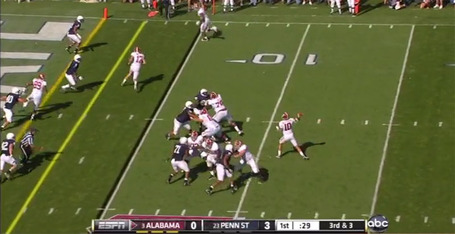 When Smelley runs the flare into the right flats, Hodges must follow him accordingly, and in doing so it creates the smallest of windows between the two linebackers. Carson had been lined up inside of Williams, and when Williams charges upfield and breaks off the stick route to the outside he again creates the smallest of windows between himself and Carson.

The playcall itself for Penn State is certainly vanilla, but even so it is a sound choice by the defensive coaching staff and makes for a very difficult throw for McCarron. Penn State guesses right on the quick pass and therefore the short and underneath zone from the linebackers is a smart call given the situation. By all accounts, the Nittany Lions have the play defended quite well from a schematic standpoint. 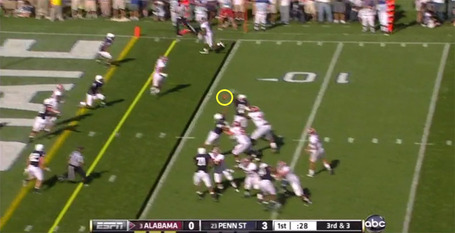 Ideally AJ McCarron would look off either Carson and Hodges and give himself some additional spacing to throw the football, but he fails to do so in this instance. Instead, McCarron somewhat stares down the route and quickly winds up to deliver a hotshot in the direction of Williams. 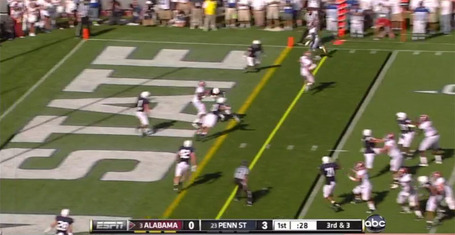 Again, Penn State has the play defended well, so McCarron leaves himself almost no room whatsoever for error. The window he throws the football through is inches wide, if that, and while the play obviously results in a touchdown the possibility of outright disaster is clearly present, and in all likelihood McCarron received an earful from the coaching staff in film review despite the positive outcome.

Bad decision or not, the ball somewhat darts through the tight window and Williams makes a tough grab on the fastball for the touchdown. 'Bama takes the 7-3 lead and the early momentum away from Penn State and the Tide never looks back on the Nittany Lions. McCarron curtails his risk-taking the rest of the way and closes with a strong showing, even if not a spectacular one, and in the process all but ends the quarterback battle in his favor.

Hypotheticals are largely pointless discussion pieces, to be sure, but even so it takes no great stretch of the imagination to see what could (or likely would) have resulted had this one gone the other way in the game of inches. If Carson reads the stick a millisecond faster he likely secures the interception and heads in the opposite direction, and with a heavy personnel package on the field and the two lone wide receivers in the corner of the end zone on the opposite side of the field 'Bama may not be able to stop him before he reaches the end zone. With a 10-0 lead Penn State would have maintained the momentum, Phillip Sims entrance into the game would have been imminent, and the quarterback battle would have extended indefinitely into the future. Few throws McCarron makes will be bigger than this one.