The legend of Bart Starr.

[ED. NOTE: In memory of Bart Starr, who died earlier this morning in Birmingham at age 85, we republish this post from 2011. Starr was a great ambassador of the University and the state.] 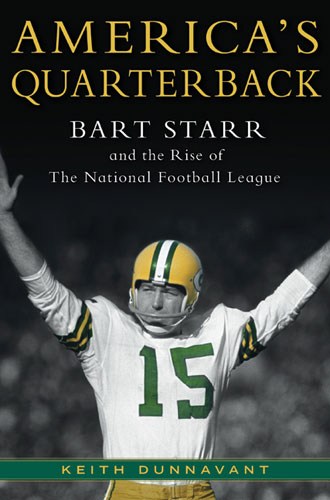 The Alabama Legends video that precedes every Crimson Tide contest in Bryant-Denny Stadium contains no game clips of Bart Starr. Despite being recognized as one of the greatest quarterbacks at the pro level, his legacy at the University of Alabama is all but overlooked due to the unfortunate timing of his playing days at the Capstone.

Bart Starr cemented in place in the pantheon of football immortals with his tenure as the field general for Vince Lombardi’s Green Bay Packers. The quarterback’s profile as it exists in the national consciousness is almost exclusively for his heroics on the frozen tundra of Lambeau Field during the 1960s. His years as a member of the Crimson Tide are often forgotten even by the Alabama faithful.

The importance of Alabama to Bart Star is one of the key points in Keith Dunnavant’s new book America’s Quarterback: Bart Starr and the Rise of the National Football League.

Starr’s time at the Capstone occurred during the nadir of the storied program. Under head coach Red Drew, Alabama football became a study in mediocrity that his successor JB Whitworth took to the depths of futility. Starr not only had the misfortune to play for both of these coaches, the latter benched him for his entire senior season.

A fortunate connection with the Green Bay organization through Alabama basketball coach Johnny Dee got Starr a tryout. Whitworth proved as useless as ever, not even providing Starr footballs to use in order to practice for the pro audition.

The Packers took him in the 17th round of the 1956 draft. When Vince Lombardi arrived in 1959, he wasn’t sold on his backup quarterback but knew good mechanics when he saw them. When pulled starter Lamar McHan in favor of Starr midway through the season, the man from Montgomery knew his opportunity had arrived and grabbed it with both hands.

Lombardi’s Packers, with Starr under center, revolutionized the NFL. They went on to win five NFL championships over the next eight years. That included victories in Super Bowl I and II. The Packers style of play put an indelible stamp on the game and their success in the early era of television helped turn the league into the institution it later became.

In America's Quarterback Dunnavant argues that Starr’s methodical style and unassuming – although effective – style of leadership has lead the quarterback to be overlooked when evaluating the historical greats of the game. Not only does Starr’s record speak for itself, his focused approach has become the standard for the modern quarterback. Starr would spend hours watching film looking for the single advantage he could use on Sunday. More often than not, he found it.

One of the biggest problems with writing about Bart Starr is the guy is too damn good to be true. He really is a super nice guy that has always gone out of his way to help others. There is certainly adversity – notably his disappointing eight-year run as the Packer's head coach and the tragic death of his son, Brett, in 1988 – but there’s never any question of Starr’s personal fortitude. 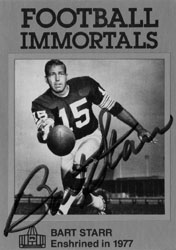 While it’s damned inspiring to know it makes horrible dramatic narrative. Dunnavant battles this as best he can in America's Quarterback but after the drama of football fades into the background of the story the book loses a huge amount of momentum. A few of the current cultural references added to spice up the narrative often sound unusually off-key for the author but the distraction is minimal.

The meat of this book is the football and in telling the story of the Packer’s amazing run of championships puts Dunnavant in his element. His account of the 1967 NFL Championship Game between Green Bay and Dallas, commonly known today as the Ice Bowl, is the centerpiece of America's Quarterback and deservedly so. The depiction of the final drive in that game is Dunnavant at his best.

While the Alabama portion of the story takes up a relatively small part of the book, it’s a critical one in Dunnavant’s estimation. The disappointment he suffered being regulated to the sidelines as an Alabama player served as an important lesson for Starr. It gave him the ability to stick with the Packers and stay on the roster as they floundered under Ray McLean.

While Alabama fans might not be able to look back at Starr’s accomplishments with the type of pride they hold the feats achieved by Joe Namath and Kenny Stabler, the Green Bay legend is important to the Crimson Tide faithful for a different reason, Dunnavant says in America's Quarterback.

"Starr’s appeal with the Alabama crowd is in reality quite simple," he writes. "In the reflected glory of his legend, his unmistakable class makes them proud to be Alabama fans."