Your Friday Hoodoo Thread | Week One

Share All sharing options for: Your Friday Hoodoo Thread | Week One

Folks, it's that time again, time to fall on our faces before the Football Gods and beg for their mercy and favor over our beloved Crimson Tide.  For the uninitiated, this is your chance to sacrifice in the name of the Tide.  The preferred sacrifice is typically your dignity and/or digestive system, so a few suggestions:

1. Embarrassing Admissions: Confess your intellectual, cultural, or moral failures.  For example, have you secretly read and enjoyed Twilight? What better time to come clean! Ever pretend you don't know how to do something just so someone else will do it for you? Own it!  Did you rock a particularly flamboyant pair of Zubaz in high school?  Pics or it didn't happen! You get the point.  Only warning, keep this PG-13.  We don't need to know ALL your moral failing STIP people.

2. Horrible Food: Since I sacrificed my digestive track for a National Championship, it's y'all's turn to carry the load.  Let's face it, my stomach and fragile psyche can't handle another dose of Vegemite.  Some of you have already volunteered (and bammer has already done his duty, though seriously bro, oatmeal? Comon.), so take this opportunity to post pics or video of your sacrifice.

3. For my own part, I have decided to take the Nickelback Challenge this year. The iTunes edition of "All the Right Reasons" features three bonus tracks to bring the track total to 14.  Should the Tide go undefeated this year they will have won 14 games. Do you see where I'm going with this? For every win I will purchase and download a track from iTunes, meaning that if we win all 14 I will own an entire Nickelback album, and will actually listen to it.

Finally, it's time to settle on a sweetheart from the five options.  After careful consideration, we're going with a Two Sweetheart system for now, with a specialized "WildHeart" role for certain situations, until someone distinguishes themself as favored by the Football Gods.  This week, I give you Laura Vandervoort and Camilla Belle. 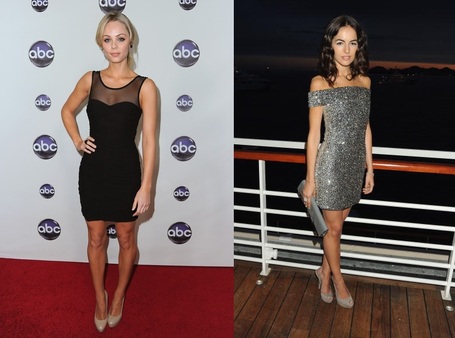 So get to confessing people. I know it's only Kent State, but let's set the tone for the season and embarrass ourselves like champions!