With this week's news of ACC fortification seemingly quelling talk--for now--of the SEC picking off an ACC team such as Florida State, Clemson or Virginia Tech as its 14th member, focus had shifted to West Virginia and Missouri as the most likely additions. Earlier today reports emerged that West Virginia had been denied acceptance to the SEC, leading many to conclude that Missouri was the frontrunner for the 14th spot.

Sure enough, right on cue, this report was broken by the Kansas City Star's Missouri beat writer: 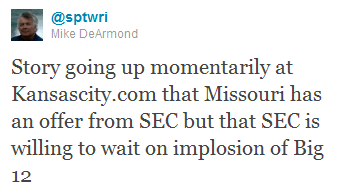 Obviously, he makes clear that the offer is not yet formal, but nevertheless the writing seems to be on the wall that Missouri will be the 14th SEC member, assuming the former Big XII is indeed about to completely implode as many expect.

Missouri may not be the biggest of football names, but they have proven to be competitive both on the football field and especially on the basketball court in recent years. More importantly, they have a large fanbase that dominates two of the largest media markets in the country where the SEC currently has no presence: Kansas City and St. Louis. They are also a strong academic institution, ranking among the top 100 universities in the latest U.S. News 2012 rankings.

What comes next is anyone's guess. Will there be a 15th and 16th team? If so, who would it be if the ACC is indeed circling the wagons? If it stays at 14, how will the divisions be altered with the addition of two western schools?

Whatever does come next, it's looking more and more likely that the University of Missouri will become a part of the new-look SEC.