With October just around the corner college football is hitting its mid-season stride. National championship contenders are falling by the wayside, several key conference match-ups are taking place, divisional races are starting to shake out, and observers are beginning to see just how good many of these teams are. As the hopes and the delusions get dashed, though, the crazies are coming out in full force.

Not surprisingly, Arkansas set the tone this weekend, leading the way with a strong meltdown in the wake of their thumping at the hands of Alabama. The Hogs may have come into Tuscaloosa with championship aspirations but three short hours later they looked like they had been blindsided by an oncoming locomotive. Not to be outdone, the neverending misery continued in Oxford, and Florida State found a way to affirmatively quash any delusions of national prominence by falling at the hands of Clemson. And finally, while much of the country had already drank itself under the table, Lane Kiffin was busy working the late night hours in Tempe in furtherance of his plan to destroy the USC football program. Job well done, Lane. 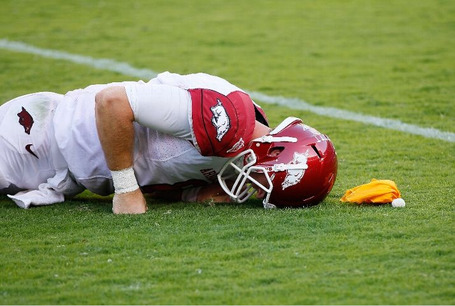 We damn sure pitched in for the tornado relief, didn't we?

Gawd damn it. I watch my beloved hogs get skullfucked by these cockswabs only to come home to see my girlfriend's dog shit all over my third bedroom. gawd damn it!  frick

It all goes back to Bear Bryant. Once I find whoever let him leave this state I'm going to piss on his grave. Daily.

The playcalling today has sucked asshole. I don't know who thought screens and short-yardage drag routes were going to work today, but they're fucking retarded.

well... i'm fuckeduppernshit... and this game fucking sucks.  We looked like god damn clown shoes.  Yeah, that's past tense.  Why?  Because the fucking game is long over.  We got rolled.... if we play like this the rest of the season, we're lucky to see the liberty bowl.

Our guys are getting prison raped 1988 Miami style. Beat your ass and then laugh at you while they beat your ass by 4 TD

Offensive line ain't got that to do with it. Playing that Bama defense is like fucking a woman with the clap. Protection dont count.

Can we go back to playing Missouri State?

Theyre not bringing Dubose back, are they?

Petrino ain't got the killer instinct. I bet Nick Saban needed Ambien to restrain the laughter from watching us run three-yard crossing routes all day on his defense.

Don't you just love how our defense can shatter our star tailback's leg and then go play pattycake against opposing teams come Saturday?

As many ass kickings as were handed out today CBS needs to launch CSI: Tuscaloosa

Next time we play Bama we might as well do a special helmet with the elephant humping the Hog. Maybe it get us some recruits so we could compete

Heard all that shit about the damage and destruction in Tuscaloosa. Never realized they were talking about the damn playing field in Bryant Denny.

Obama does better in Alabama than we do 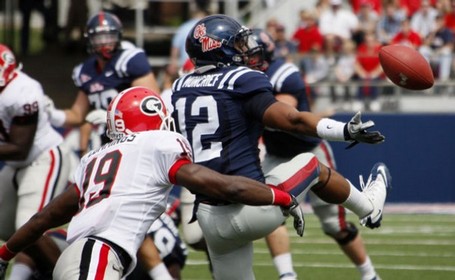 So at what point would it be okay to just start watching cats on YouTube?

OH MY GOD HOW ARE YOU FUCKERS SO BAD? OFFSIDES WHEN WE HAVE THEM AT THE 1?

I've always wanted to try black tar heroin. Can't be as bad as this, can it?

I think blowing off our foot with a grenade would be more appropriate.

Ole Miss: Making Other Teams Feel Good About Themselves Forever

I'm at the point of thinking this season as performance art

The kind where the artist smears themselves in pig shit and goat blood, maybe

blair walsh is our best player

Nobody gives a shit about the race of the players fuckstick

I don’t care if a team of sherpa’s comes down here and whips us up and down the field. The fuckin’ colonel is gone. G. O. N. E. He was never meant for 21st century America. He’s a relic of your childhood.

Yes I’m a graduate of Ole Miss, and yes I too miss the colonel. However, I could care less if he comes back. What good what it do us? If it would help us I’d put the fucking suit on right now. It won’t help us unless that fucker can play QB. I don’t give a shit. I just don’t want us to look like a jv squad anymore

I've had way too much Bourbon, Beer, and Red Wine in me right now... I’m sorry, but this is another random non-sober rant……Fuck Boone. I hope his kids get feline AIDS.

Hypothetical: If we played South Panola next weekend, how much would they be favored by?

You're assuming South Panola would even play us. We'd kill their strength of schedule

Easy solution to conference expansion: Add Aggie to the West and we'll go play with Memphis in CUSA 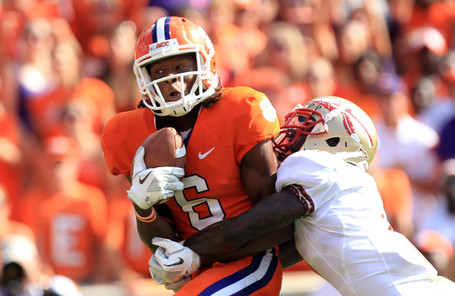 So is the Big East still taking applications?

my whole dorm now things I have Tourettes

That piss felt warm running down our legs, didn't it?

All of that offseason shit talk and we get bitch slapped by the dregs of the ACC. Wheres that mythical recruiting national title now?

Where are all of you fuckers who were praying we'd go to the SEC? We'd be the 8th team in the conference at best. We get bitch-slapped by Clemson and you rubes want to take on the shit that Bama and LSU have to offer? Put down the crack pipe, Jermaine.

Can the feel-good father-son shit. Trickett's OL is a wet paper sack and is getting guys killed. We haven't had a strong OL since Clinton was poppin all over Monica's dress.

I like Trickett's attitude, but he's really just slinging shit out there and hoping something sticks. He's going to get some receiver killed

I'll keep the son. We need to send his old man to bunk with Bobby in Del Boca Vista.

How is it even possible to only have 29 rushing yards against Clemson? usually Clemson spots you 100 just for showing up

The media fluffs us all offseason and we go flaccid before the end of September. Somebody tell Notre Dame they've got company. 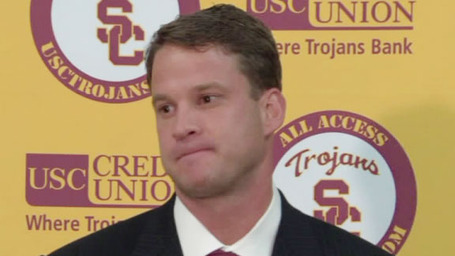 There's not enough fake tits in all of Orange County to cheer me up after this one.

Our savior quarterback has the intensity of a seventh grade stoner. To all you scared he's leaving, if the NFL wants that piece of shit they can take him.

Lane Kiffin football in a nutshell: Good number of points, lots of yards, shit tons of turnovers and stupid penalties, and pantyhose defense. I'd take Pete back now

With Kiffin why did the NCAA even need to punish us?

This is just entitled arrogant pussies going through the motions. Might as well be watching rich kids working part-time at In and Out burger

Apparently our team was informed at the the latest NCAA compliance meeting that tackling is a major violation.

USC gets shitkicked by a Pac-10 also-ran on national TV and hardly one word is said about it in the media the next day. If that's not the definition of irrelevant I don't know what is

Barkley had the same look of disappointment on his face after the loss that I get when I overheat my Hot Pocket. Pathetic

Enjoy the mediocrity while you can. Once the NCAA cock punch kicks in we'll have to hope we can get back to mediocrity.

Who really believes we've got all of this talent? Fact is the talent level at SC has been dropping like grandma's tits for the past five years. Most of these players couldn't have gotten on the field 2003-2005, muchless start

Tampax 2 defense? It is soft, and cannot stop the bleeding! The Tampax 2 has produced one interception all year. So much for the new and improved version...it is the same ole rag...

Reality is, SC got outcoached by a a dinosaur.

Kiffen is a playstation headcoach. He thinks hes playing Madden 2012 out there with some of the play calls he makes.

The next (first?) Tennessee fan I see damn well better buy me drinks

Lane isn't shit but the Clipboard Holder in Chief