Alabama has seemingly always had a tendency for big plays early in games against Arkansas, going back to Shaud Williams in 2002, and that has been especially true under Nick Saban. After Glen Coffee gutted the Hogs in 2008 in Fayetteville, two years ago Alabama jumped out to another early lead over Arkansas thanks in large part to some trickeration on a long pass play out of the Wildcat. When Bobby Petrino and company returned to Tuscaloosa this past weekend, Saban pulled off the trickeration yet again, this time with a shift out of a field goal formation. Let's take a closer look at the film.

Alabama starts the game with two Trent Richardson rushes that net the Crimson Tide 30 yards, and the chains keep moving with a twelve-yard completion to senior wide receiver Marquis Maze. 'Bama looks poised to continue the early offensive success in Arkansas territory, but the drive immediately stalls. Richardson gets blown up in the backfield on second down, and on third and long A.J. McCarron finds discretion to be the better part of valor and tucks the football for a four-yard gain, bringing up fourth down. With the ball at the Arkansas 37-yard line, Nick Saban sends Cade Foster into the game, ostensibly to attempt a 54-yard field goal.

Despite the big leg prep pedigree, however, Foster has been something of a disappointment since arriving in Tuscaloosa, lacking the booming kick-offs many expected and being too inconsistent to beat out Jeremy Shelley for the short-and-intermediate attempts. Through fifteen games at Alabama, the career long for Foster is 49 yards, and the two kicks he has attempted from roughly this distance have landed closer to the back pilons than the goal posts.

Surprisingly though, given the length of the kick and Foster's erratic nature, Arkansas comes out in a field goal block formation with all eleven defenders at least initially feigning some intention of rushing the kick. Bobby Petrino could have played it safe and simply sent his base defense onto the field for the fourth and four, but for whatever reason decided that was not necessary. 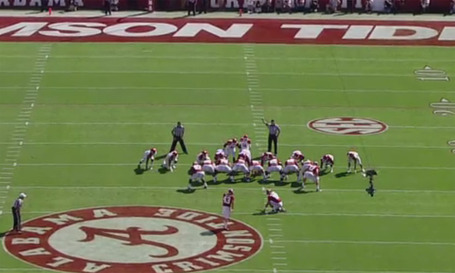 Of course, Alabama doesn't stay in the field goal formation for long. Starting quarterback AJ McCarron, who is also the Tide's holder on placekicks, quickly shifts back into the shotgun formation, as tight end Chris Underwood splits out wide and Foster darts out in the slot, both players to the offensive left. McCarron, however, lines up seven yards behind the line of scrimmage, abnormally deep for a quarterback in the shotgun.

Reacting to the shift, though, Arkansas only slightly alters their alignment. Julian Horton goes out wide to cover Underwood, and both Jerry Franklin and Alonzo Highsmith drop off the line and into a two-point stance. Aside from those three players, however, the bulk of the Arkansas defenders make few substantive moves. 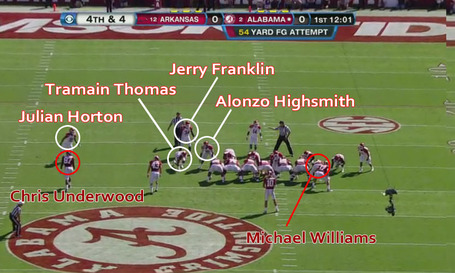 Based on the pre-snap look alone, the smart money on this play is arguably a pooch punt from A.J. McCarron. With no one back deep to return for the Razorbacks, McCarron could easily loft a dribbler over the head of the defense and allow it to roll toward the goal line where an Alabama player could easily down the ball to pin the Hogs up deep. Additionally, this would explain the abnormally deep alignment of McCarron in the shotgun, who would be looking for extra room to launch a punt if indeed that were the call.

When Chris Underwood darts across the formation to the offensive right, though, it becomes more and more clear that no pooch punt is coming from the Tide. 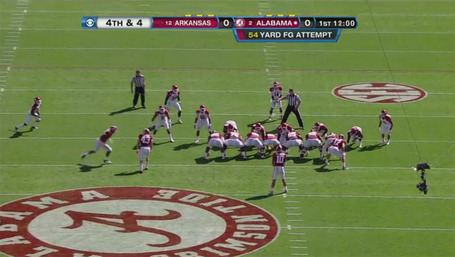 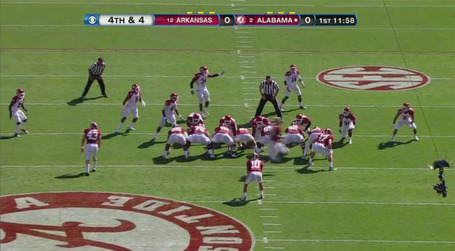 By the time that Underwood makes his way across the formation, some five full seconds have elapsed since Alabama originally shifted out of the field goal formation. Bobby Petrino sits on the sideline with three timeouts in his proverbial back pocket -- one of which will ultimately go unused in the first half -- and does nothing while the Arkansas defense worriedly glances back and forth at one another in obvious confusion over what is transpiring. 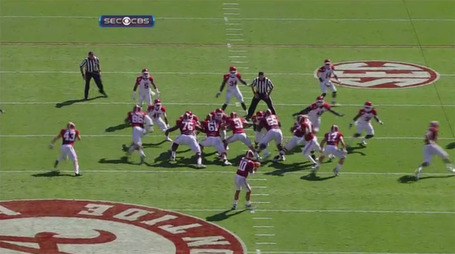 When the football is snapped, notice how everything (well, almost everything, as we will see) goes to the offensive right. 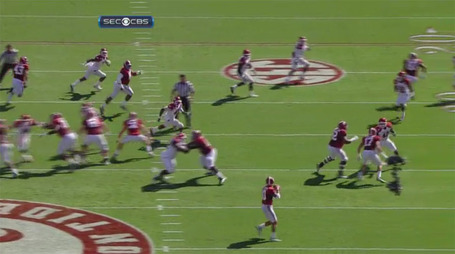 A.J. McCarron rolls right and retreats some thirteen yards behind the line of scrimmage. Undra Billingsley, the converted tight end who was at defensive end five weeks ago, releases off the line of scrimmage and runs a crossing route over the middle. Foster, too, cuts inside and runs a crossing route of a slightly greater depth than Billingsley. Meanwhile, motion man Chris Underwood turns upfield hard as he crosses the formation and attacks the defense down the right sideline on a vertical route.

And just as it was drawn up, with 'Bama moving everything to the offensive right, the Arkansas defenses flows in the same direction. Meanwhile, Alabama tight end Michael Williams goes unnoticed as he slips behind the offensive line and sneaks out the backside. 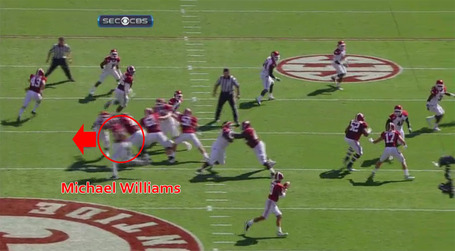 Let's flip camera angles for a better view of the action to see just how clean of a release Williams gets while going across the field. 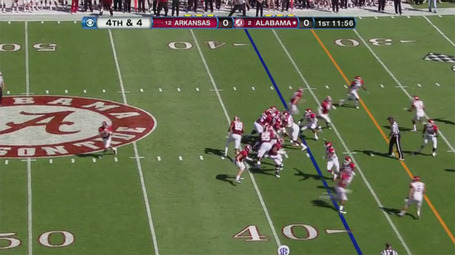 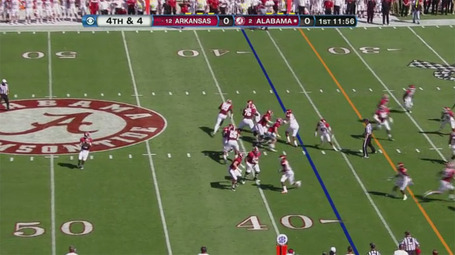 Once around D.J. Fluker, who was lined up at left tackle on this snap, Williams plants his foot in the ground and turns upfield. With the pre-snap motion from Underwood and the crossing routes from Billingsley and Foster, the Arkansas defense has all swarmed to the front side and no one is remains on the backside to cover Williams. 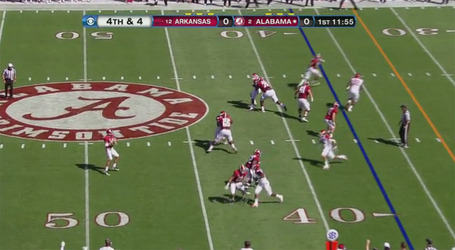 Of all of the Arkansas defense, only junior defensive tackle DeQuinta Jones notices Williams sneaking out the backside, and despite his efforts there is nothing that the Bastrop product can do about it. Jones gives it all he has but Williams is some 40 pounds lighter and he easily pulls away in the footrace as the duo charge upfield. 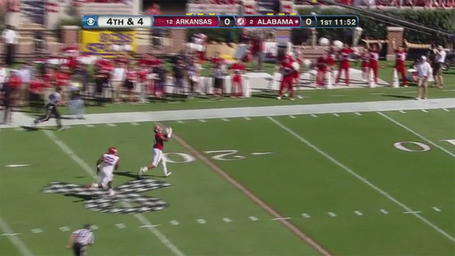 With Williams wide open and only a bulky defensive tackle trailing him, McCarron is faced with one of the easiest downfield throws he will make during his time at the Capstone. The ball seemingly sails a bit and for the slightest moment the pass looks like it may be overthrown, but having a 6'6 target with good speed has its perks, and Williams aggressively chases the ball and plucks it out of the Tuscaloosa air.

As the afternoon progresses 'Bama dismantles the Hogs vaunted passing attack and pulls away in large part to three more long touchdown plays like this one. The final score indicates a relative snoozer, but nevertheless never underestimate the potential impact of big plays early in games, and with Arkansas looking to establish itself as a national championship contender, 'Bama seizes the early momentum and once again builds an early lead from the outset via the big play.