Random Thoughts from Around the SEC

Share All sharing options for: Random Thoughts from Around the SEC

With week one of the college football season in the books, a few thoughts in the aftermath of the opening weekend:

Alabama: Solid showing against Nick Saban's alma mater, but plenty of areas that must be improved. The defense was outstanding and the defensive line in particular was a pleasant surprise, but quarterback play was inconsistent, ball security was a disaster, and the offensive line continued to struggle. The defense will carry 'Bama a long way with some help, but unless those final three concerns are quickly addressed UA won't be undefeated for long with this schedule.

Arkansas: Annihilation of Missouri State went as expected, with two more cupcakes on the schedule between now and the trip to Tuscaloosa. Petrino has probably been preparing his Hogs for 'Bama since mid-August. The real season opener for the Hogs is in Tuscaloosa in late September. Food for thought: With the struggles of Aaron Murray, is Tyler Wilson the best quarterback in the SEC? If not him, who?

Auburn: This is Auburn. They are going to be play like a middling-at-best team, they are going to execute poorly, they are going to have a porous defense, they are going to consistently make major mistakes, yet somehow they are still going to fall ass-backwards into victory. This is the Gene Chizik way, and while the realist would say the luck would run out at some point, there is no sign of that happening just yet, and it's at least conceivable they'll do the same thing against MSU, Clemson, and South Carolina, among others, as the year progresses. Exit question: I've given him the benefit of the doubt to date, but in year three the Gene Chizik defense is giving up 38 points to Utah State. For a supposed defensive guru who has had success on the recruiting trail, what is the problem? (And yes, I know Ted Roof is the DC, in title anyway.)

Florida: Easy win over Florida Atlantic, and with UAB, Tennessee, and Kentucky finishing out September, Florida should have no problem being undefeated when Alabama comes to Gainesville. The Gators clearly have some problems at a few key positions, but this is still the most talented team in the SEC East, and those selling them short from the outset could look foolish come late November. A brutal schedule remains the biggest problem for Will Muschamp.

Georgia: The Boise State fight song will be viewed by many as the dirge of Mark Richt, but in reality Richt's tenure at Georgia really never was much in the first place, and in any event has clearly been over for some time now. Losing to Boise won't cost him his job, but it will make his inevitable demise that much more apparent to the true believers. Given the weakness of the SEC East they could still make a run in the division, and hell would even be the prohibitive favorite with a win this weekend over South Carolina, but a division crown won't save Richt any more in the long-run than it did Phil Fulmer in 2007; it's a question of when, not if, in Athens. Meanwhile, Isiah Crowell looked overrated and entitled, Aaron Murray looked sub-par with no A.J. Green, the offensive line was weak, and the defense would have been considered soft by Arena League standards. All bad signs for UGA moving forward.

Kentucky: The 'Cats had the ugliest performance of the opening weekend 'til Auburn took the field, and by all accounts would have lost to Western Kentucky had the Hilltoppers had any quarterback play whatsoever. The new faces on offenses for UK were almost all duds and even though it's conceivable this team could get to six wins -- four cupcakes plus Vandy and Ole Miss on the schedule -- the odds are heavily against it based on how they played on opening weekend. Biggest concern for UK? They bet the program on Joker Phillips, and so far he has done nothing to inspire.

LSU: I'm hesitant to overly heap praise on LSU based solely upon a victory over a team that I've long since argued was highly overrated, but facially they had the strongest showing of any SEC team on opening weekend, and by all indicators this looks to be Les Miles' best squad since 2007. Despite public support from the coaching staff, Miles and company clearly have no real trust in Jarrett Lee, but the power running game is strong and the defense looks to be able to go toe-to-toe with Alabama. And speaking of the Tide, these two teams look very similar at this point... teams led by great defenses and powerful tailbacks, with questions at quarterback and on the offensive line. The showdown in Tuscaloosa in early November looks to be epic, and could be a de facto national championship game. Lagniappe: tip of the hat to the LSU coaching staff, from the first snap they executed the offensive game plan that it took Gus Malzahn 58 minutes to figure out in January, and they were rewarded accordingly. 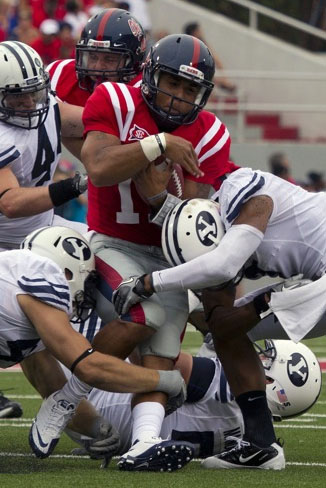 Ole Miss: Ugly performance by Colonel Reb sees an impotent offense waste away a winnable game and a strong performance by the defense. The loss of Brandon Bolden could be a huge blow, and the offense looks inept as ever. The defense may keep things respectable, but at this point Ole Miss is in a race with Auburn for the SEC West cellar, and the only real intrigue in Oxford is whether or not Houston Nutt returns in 2012. This team was never going anywhere in the first place, and they got nowhere fast by soiling themselves against the Mormons. Added bit the cynic in me finds amusing: Ole Miss has begrudgingly dismantled nearly every single program tradition solely in an effort to make itself more attractive to young, black prep football players so that they could hopefully win more football games -- and not because, you know, it might actually be the morally decent thing to do -- and on Saturday their nearly all-black football team was taken out by the whitest team on the planet. Perhaps Colonel Reb should realize that image isn't the real problem in Oxford, that Ole Miss will never get anywhere with bad football players and incompetent coaching, regardless of skin color, and that all of the sham, pretextual concessions disguised as legitimate attempts at improving race relations race are both misleading and ineffective, no?

Mississippi State: Sloppy play and suspensions were covered up by an atrocious opponent, and State rolled with ease. The defensive line, however, looked very suspect against the run, which figures to be a major concern against better teams, and left tackle has gone from a strength to a swinging gate thanks to the departure of Derek Sherrod. No one really expects MSU to make a serious run at Alabama, LSU, or Arkansas in the SEC West, but they do have a reasonable opportunity to establish themselves in the top half of the league. We'll find out much more about the Bullies this upcoming weekend; if they cannot beat Auburn they are far closer to a pretender than a contender.

South Carolina: If it comes as a surprise that South Carolina gave up 37 points to East Carolina, perhaps you should put down the garnet and black Kool-Aid, change the channel from the talking heads on ESPN, and remember this is still the same team that lost five times a year ago and who has a head coach hellbent on hurting his team with dumb personnel decisions at quarterback. So, yeah, East Carolina built up a 17-0 lead before Carolina got it together, no real surprise. The Gamecocks are still probably the prohibitive favorite in the East, but performances like the one Saturday night ought to serve as a bucket of cold water to the face for many. Solid team, yes, SEC champion and darkhorse national championship contender? Not even close. This team is closer to Tampa than New Orleans.

Tennessee: Montana was the first foe in a laughably weak OOC schedule that may deceptively inflate UT's final record, but even so not an overly impressive start for the Vols. Tyler Bray did well enough, but the defense had some issues and the tailbacks averaged under 4.0 yards per carry on 30+ tries. The early takeaway is that this team will go as far as Bray, Da'Rick Rogers, and Justin Hunter can take them, which won't be very far if struggles continue throughout the rest of the roster. At some point you have to be able to play defense, run the football, and block up front. How many of those things can UT do at the moment?

Vanderbilt: James Franklin is now the only undefeated head coach in Vanderbilt football history. And as an added bonus, as bad as Kentucky looked, the 'Dores might not be the cellar dweller of the SEC East this season. Little more can reasonably be expected in Nashville.