No Split Championship: Alabama #1 in the AP Poll

Share All sharing options for: No Split Championship: Alabama #1 in the AP Poll

So much for any talk of a split national championship: Alabama has been voted #1 in the AP poll by a wide margin. The final top ten, per ESPN: 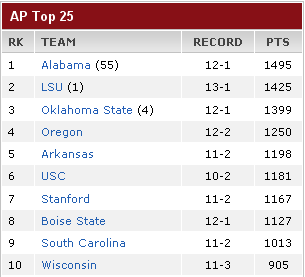 Not only was there no split national championship, this one was not even close. LSU picked up only one first place vote -- no word on exactly who it came from -- and in fact Oklahoma State had three more than the Bayou Bengals. It's hard to blame Les Miles for trying to persuade voters last night to reward LSU with a share of the title given their overall accomplishments on the season, but clearly the 21-0 domination in New Orleans proved too much for even the often-unruly AP electorate.

With an eye more towards conference affiliation, the SEC once again dominated the top of the poll, taking the two top spots and three of the top five with Arkansas coming in fifth after their Cotton Bowl victory over Kansas State. The SEC placed four teams in the final top ten with South Carolina coming in ninth, which is the highest finish ever for the Gamecocks in any major poll.