We've kept up with these numbers over the course of the season, and now it's time to start putting them into some sort of useful order. What better way to start than with #10 on the list of the SEC's Top Ten Rushers, Tennessee's Tauren Poole. For those of you who are new to this, the Running Back Success Rate is a measure of how "successful" each of a running back's rushing attempts are. A "successful" run is one that :

With that in mind, here are Poole's numbers over the course of the season.

As we begin comparing the rest of the backs, we'll look only at their numbers against SEC opponents to eliminate any over inflated numbers against the cupcake OOC fodder. Below is a chart of Poole's performance over the course of the conference schedule: 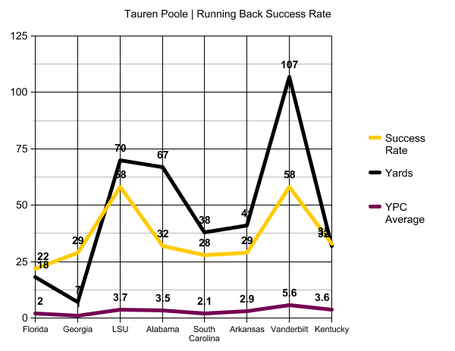 A few things we can note from this:

1. Only twice did Poole top 50% in success rate, amusingly enough against LSU (#2 rushing defense in the league) and Vanderbilt (#4). Those were also his season highs in yardage and YPC average against the SEC, and two of the highest carry loads as well. He carried a similar load against Alabama (SEC's #1 rushing D) with similar results in YPC as against LSU but at a much lower success rate.

2. With that in mind, and especially considering the losses of Justin Hunter and Tyler Bray before the LSU game, when Tennessee really committed to running the ball with Poole in the face of basically zero other options they were able to find some success. Unfortunately the team just wasn't particularly good in any phase of the game (we've said several times on the podcast that this is the worst UT team of our lifetimes) and without even a semblance of a passing threat or a good enough defense to keep the other team from scoring it just wasn't enough to spark anything for the Vols.

3. The way his success rate line and total yardage line pretty well mirror each other is a good indication that Poole's numbers accurately reflect his performance, i.e. not a lot of big, stat skewing outlier runs.

4. Overall, though, Poole was merely a pretty good back on a terrible team that afforded him very little chance for success.