I had planned to count these down from #10 - #1 of the SEC's Top Ten Rushers but quickly remembered that the days of the feature back are almost gone and looking at the performance of individual backs in crowded backfields doesn't paint the same picture as looking at all of them together. Only LSU really had a running back by committee approach, using four different backs on a regular basis, but looking at someone like Chris Rainey, who finished sixth in the league at 71.8 yards per game, without also looking at Jeff Demps doesn't really paint the whole picture. So I'm skipping ahead for the next couple of days with guys who carried the biggest portion of their team's burden, like Georgia's Isaiah Crowell. While the Dawgs did routinely use rushers Carlton Thomas and Richard Samuel, Crowell's 185 carries was still 30 more than their 155 combined carries despite missing both the New Mexico State and Georgia Tech games. What I'm trying to get at here is that Crowell was the main event, so let's just go with it.

With that in mind, here are Crowell's numbers over the course of the season.

Again, for the sake of comparison among the SEC back we will only be looking at their performance against conference opponents to eliminate stat skewing performances against OOC cupcakes, but in Crowell's case it's almost a moot point. Both his success rate and ypc average remained the same against the total schedule and the conference slate. I suspect a big reason is that, as previously mentioned, he sat two of the OOC games, giving him less of an opportunity to pad the stats sheets as some of the other backs in the league. So let's look at his in conference performance: 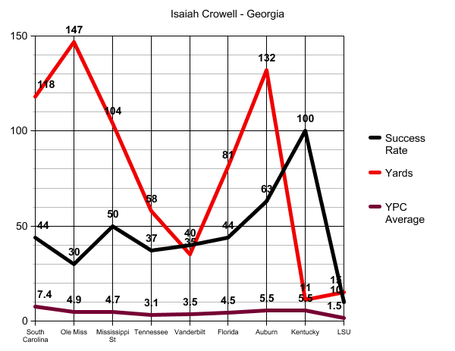 As most of you will recall, Crowell was a VHT, super stud recruit that pretty much everyone in the SEC, including Alabama, wanted and was effectively thrust into the starting role as a true freshman after Georgia faced a mass exodus (in one way or another) of running backs over the off season. That graph you see up there? That's almost exactly what I expected from a super stud true freshman that's long on talent but short on experience/development. I think a big part of that is the fact he was being counted on as a workhorse as a true freshman, and that's a pretty heavy load to carry in the SEC. You can see a steady decline in both his yardage and ypc average after the South Carolina game. The next week Crowell carried 30 times against Ole Miss, and not only did his yards/ypc decline but so did his number of carries. Not until a relatively light 10 carries against Vandy (and a week off before Auburn) did his numbers start to improve in those areas and get back to where you generally want your feature back to be. He also only carried twice against Kentucky (his best performance with 100% success!), but against a stout LSU defense he simply couldn't get anything going again. Looking at his success rate numbers, he remained fairly consistent, even showing a steady rise before running into the LSU defense's brick wall in the SEC Championship Game. The less than 50% numbers aren't good, though, and coupled with the sharp decline in yardage in the midseason you get the sense that, as a true freshman, Crowell simply wasn't really ready to carry the load that was put on him. The wear of the workhorse load eliminated the explosive plays that drive up the yardage/ypc numbers, and the true freshman in him kept him from being able to allow plays to develop and be the consistent grinder that can routinely keep the offense on schedule and move the chains when necessary. Overall, I'm actually pretty impressed with Crowell. If he can really take a big leap next year and develop the talent that is clearly there, Georgia will have themselves a heck of a feature back.