Our weekly revel in the misery of others features Mississippi State, Auburn, Florida, and Tennessee. Point and laugh!

Share All sharing options for: It's Meltdown Time! | Week Nine

WARNING: THIS IS VULGAR. THERE ARE BAD WORDS, TOILET HUMOR, AND SEXUAL INNUENDO. YOU SHOULD KNOW THIS BY NOW, BUT IF YOU DON'T, IT'S ALL THERE, AND PROBABLY SOME WORSE STUFF THAT I'VE BLOCKED FROM MY MEMORY. IF YOU ARE IN ANY WAY EASILY OFFENDED DO NOT READ FURTHER. SERIOUSLY. DON'T. FOR REALS. 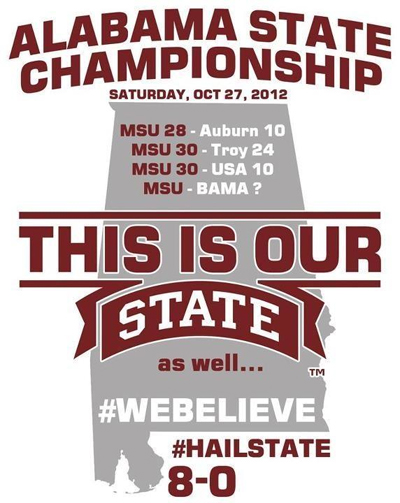 turning it off. i believe,we are not CLOSE.

we havent faced this yet this year. Thats where playing pansies hurts you.

God this is embarrassing. On national television. We talked crap all week long about how we were disrespected

That’s my thing with us always wanting respect. You have to earn it first and we’ve never really earned it

A 21 point lead is like 50 for bama. you ain't comin back from that

ccouldnt care less now we are bordering on pathetic. how much of THIS can dan mullen take,before he moves on

Please, bama, enough. My ass is so sore

If you count the 5 yard penalty, MSU just drove the ball 103 yards - in a single drive - and came away with no points. That HAS to be a record or something, right?

I believe...we are the same old M State.

I shouldn't have a problem mixing cold medicine and large quantities of alcohol, should I?

All it was- optimism and trying to get our boys pumped. No one in their right mind thought we were gonna beat them. If they truly did then they're fucking ignorant.

The Devil sold his soul to Nick Saban

You know what's more annoying that stepping a piece of glass? Alabama fans.

Well... 365 more days of taking shit from my mother

At least 1/2 of our fans aren't bandwagons rednecks or actually go/or went to MSU!! I love my school now matter what!

#webelieve We just got our asses handed to us 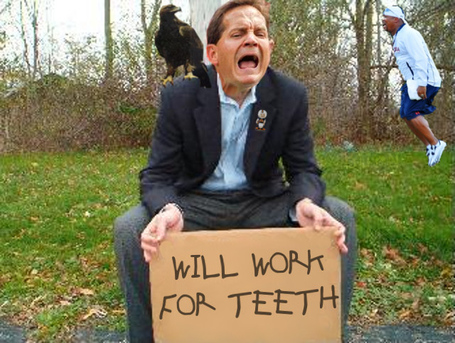 Over the last 50 years, Auburn's defense has given up over 600-yards on 4 occasions. Three of the four have come during the Gene Chizik era.

At Auburn-TAMU game. The Tigers might be the worst football team I have ever seen & I once went to an Indiana State game.

I could be studying right now.

Auburn needs to clean house and buy another quarterback

This embarrasses #auburn and what we stand for .....get the hell outta here Chiz and your crew

now, when i tell ppl i go to Auburn they reply *concerned face* "it's gonna be okay"

"This is becoming embarrassing for the Auburn Tigers." Becoming? You dipshit announcers, it was embarrassing an hour and a half ago.

Leaving at halftime doesn't make you a bad fan, sitting and watching your favorite team get ass raped w/out being bothered by it does.

Just called Dad. "Don't say anything about the game!! I'm recording it, going to watch it from the beginning." So I just started crying.

All In and All sad

Uh, I HOPE this is rock bottom. But there’s still quite a few minutes of 2012 football to endure. I hate everything.

Oh, we'll be sitting at rock bottom for a while. I don’t even want to think about what Alabama will do to us.

Yeah, I’m afraid this is just a thin layer of sandstone on our way to solid rock. I’m not sure we’ve hit bedrock just yet. I shudder at the thought of what the rest of this season brings.

The crowd seems quite and dead. But I saw Troopah running up and down the sideline swinging that damn towel

If I was an AU QB I would knee cap myself so I wouldn't have to be a part of this shite show.

But we had a good week of practice and a very supportive pep rally.

I hope Holland gets polio

Chiz won't make it to the IB.

I hope our entire team doesn't make it to the IB. Let's just call in a forfeit.

Or better yet let's give him a raise and extend his contract.

We're in the Red Zone!!! How many points is that worth??

What did the crowd just cheer for?

scot loeffler just fell out of the box

I left to take a chizik and wipe my jacobs and we scored again.

SECr lawyers: What is the worst thing that can legally be done to Jay Jacobs and Gene Chizik without someone going to jail? TIA.

Fyi, I'm not leaving. I've already told my parents "you did this to me, you sit here and deal with it"

I want to dieeeeeeeeeeee, put a bullet in my heeeeeeeaaaaaadddddddddd

Van Gorder was at the alley bar last night. Maybe he shoulda been watching film

Sure he isn't there now?

One question: Does Toomers get rolled if Chizik gets fired?

Every moment this team breathes air.. they get worse. Everything is regressing to a point where at any moment these kids will be on the field playing the wrong sport...

Give everyone a set of waterwings... Toss them into the Atlantic... Anyone who can make it back to shore, 'Congratulations'- you've got desire and fight in your soul after all. You're Welcome for the free life lesson.

Yup they have a true freshman making us look like a middle school team. We are pathetic with no heart. These are not Auburn men

GUYS AND GIRLS GENE CAN TURN THIS THING AROUND. GIVE HIM ANOTHER YEAR.

There are 119 division 1 coaches i'd rather have than Chizsuck

Did we just get compared to Kentucky as the only other team to give up 42 at the half... we gotta make a change.

Kenticky would wax our ass

What are the symptoms of severe depression?

What you are experiencing right now

oh well, we cant give up a hundred, our score board won't go that high

Can we just tell the Turds our busses broke down?

Man, this coaching staff should cash their paychecks with a gun and mask.

I can't wait until our version of Saban gets here in December!!! Cough Cough PETRINO Cough Cough!

What's the most points we've ever given up at home?

I will be able to tell you in an hour and a half or so.

Do our players not realize they're getting smoked. Instead they're flexing biceps and bumping chest. WTH? They're playing against TAMU's turd-herd.

They got it from Trooper

This is only the second time we have scored three touchdowns in a game this year.

Someone get Holland a wheel chair so he can catch up.

Dear Gene,
Thank you for all you have done for Auburn University. We appreciate your service and cherish the national championship we won with you at the helm. We trust you will invest this buyout wisely as it is unclear that you will ever get another job in major college football. It was a great time, we laughed, we cried, hell- we beat bama! Now please pack your stuff and make sure you are clear of Auburn city limits by noon tomorrow.
Sincerely,
All Of Us

That was the most pessimistic "Let's see what type of adjustments Auburn makes during halftime..." I've ever heard from an ESPN announcer.

Sitting at the auburn game, what am I doing here? At least I got an awesome hat

Is Chizik on the Bammer payroll? he has destroyed Auburn recruiting for the foreseeable future

I know why practice is closed because they didnt want anyone to find out they have stopped practicing.

I say get Yellafella out there on the sidelines, like he used to do with Tubs. Have him fire Chizik on the spot, then take a yellawood 2x4 to the backside of the rest of the staff.

This disastrous year would not be so intolerable if the team that the tree poisoner roots for wasn't a dynasty. Saban, you failed in the NFL, you need to return to the pros to prove you can really coach.

STFU you are just a fan who never played the game. I hate ppl like you who give up on our team. And especially all the "were all in" fake fans who left the game early. Go root for Bama we dont need you fans that only support the team when we are winning

I want an Apology from Coach Chizik.

ok maybe just maybe the whole team has been abducted by aliens because even a man from frickin Mars could play better than this.........i have never in my life..........and I was there in the Barfield days.........Lord have mercy.

Do not tarnish Doug Barfield. This team is beyond comparison.

Georgia is saying 'here, Florida. take the win away from us'.

right now we are politely declining, via the offense

It could be worse.....we could be Auburn fans

Had to figure the train would eventually come to a stop. Just shocked that it came off the tracks, fell from a bridge, and exploded into a ball of fire at the bottom of a mountain.

Yeah, you KNOW that Saban and crew were watching this unholy mess and laughing their a$$ off about what a joke the SEC east is...

Time to sacrifice a virgin. Too bad Tim is in NY.

here we go.......statue of liberty coming up

Screw that, we need the mother of all plays: the annexation of puerto rico

georgia still has to play auburn and ole miss, the season isn't over if we lose

Honey, where is my gun?

if anyone trash talks me at church tomorrow, I will give them one warning before I punch them in the mouth.

Single file line onto the ledge please, no need to get testy. There is plenty of room for everyone...

Anyone seen that episode of Malcolm in the Middle where Reese breaks Malcolms microscope by accident and then punches himself in the face to take the blame off himself and get Malcolm in trouble? And then Malcolm started smashing his microscope with a hammer to make it seem like Reese broke it even more? That's how I picture this QB battle.

look on the bright side, at least we get the dignity of not playing Alabama

Gators remember when we were full of hope and swagger 3 hours ago? Good times

How in the fuck can there still be an entire quarter left? I'd rather have this game called at the end of the 3rd for lack of acceptable performance.

Why does our o-line even exist

We should just lose so we don't have to play Bama.

With the weather being nice out, my wife has reminded me numerous times that the windows are open….

Bad news: our season is fucked
Good news: this will keep Richt from getting fired for a while.

Just wanted to stop in to say FUCK EVERYTHING ABOUT THIS GAME SO FAR. Thanks for listening.

At this point, I would say the O-line is the weakest element in the program.

Our WRs would be very upset with you for forgetting them.

How do you go to the University of Florida and can’t count?

Poor Dooley couldn't find a Nguyen in a room full of Vietnamese people!

UT is the bad guy in the horror movie. You're sure he's dead, then he makes one last lunge with the knife. Then he gets capped in the head

Derek Dooley is working furiously to schedule Colorado for the next four weeks.

I just want us to be hated again. I don't care if they ever win another NC (been there, done that), as long as they're like "DAMN VOLS!"

If your in Knoxville, please make an effort to throw beers at Michael Palardys car. Or kick his ass. He deserves both.

All of us Vol fans need to remember it can always be worse. Take Auburn for example...