The Historical: Alabama vs Notre Dame - The 1975 Orange Bowl

In 1974 Alabama had an opportunity to capture the prize that eluded them the season prior -- the consensus national championship. But, once again, the primary obstacle standing between The Crimson Tide and that lofty goal was the Notre Dame Fighting Irish.

Share All sharing options for: The Historical: Alabama vs Notre Dame - The 1975 Orange Bowl

Following the devastating loss to Notre Dame in the 1973 Sugar Bowl, Alabama coach Paul W. Bryant received a letter from the Irish's coach Ara Parseghian. He complimented the Crimson Tide on the tightly-fought title game and noted how wrong the impressions he and many other had held about the Alabama team and its supporters. Parseghian went on to explain how the game had been good for the two programs and college football.

"It was very gracious, Ara's letter," Bryant said years later. He also remarked that he wished he had written one like it himself. The opportunity to do so arrived sooner than anyone imagined.

After the crushing disappointment of the loss on New Year's Eve, Alabama regrouped in the off season. But once the 1974 campaign got going Bryant found himself battling a roster ravaged by injures almost from the start. Almost two dozen key players were sidelined during the course of the season forcing the Crimson Tide to rely on younger players without much experience. Luckily, many of these proved to be quick studies and none more than freshman Ozzie Newsome.

The fifth game of the season found Alabama in a wrestling match with Florida State -- a stunning development since the Seminoles came into the contest with the longest losing streak in the nation. At the halfway point of the fourth quarter, Alabama trailed 7-5 and Bryant turned to his bench to save the day putting Newsome in the game. The tight end from Muscle Shoals took little time making his mark with a clutch catch that set up the winning field goal.

The Crimson Tide seemed to rebound after the Florida State contest and returned to their championship form yet there was another far different challenge awaiting them. TCU traveled to Tuscaloosa on Oct. 26 for what proved to be a routine 41-3 Alabama win against an outmatched out-of-conference opponent. Yet the outcome of the contest paled to insignificance when Horned Frogs' running back Kent Waltrep was hit and did not rise from the turf.

Waltrep had been hit cleanly but fell backwards over a fallen Tide player and the back of his head struck the turf, snapping his neck. He would never walk again. Bryant spent most of the next three days in the hospital checking on Waltrep and comforting the TCU player's parents. The incident cast a pall on the season and, many later thought, changed Bryant as well.

But Alabama continued to win including a tough 17-13 victory over a stout one-loss Auburn squad in the Iron Bowl. The Crimson Tide finished the season unbeaten with a clear path to the national championship. Only two obstacles stood in their way -- Oklahoma and Notre Dame.

Oklahoma blasted through the 1974 season like an unstoppable juggernaut. No team could put up more than two touchdowns of Barry Switzer's Sooners or come within two touchdowns of them at the final whistle. At the end of the regular season the Okie squad was undefeated and sitting the AP poll -- but there was a catch.

The Sooners were under NCAA sanctions been handed down the year prior due to recruiting violations. In 1974 Oklahoma remained under a bowl and TV ban and was also ineligible for the UPI championship.

That left the door open for the only other undefeated team in the nation, Alabama. The Crimson Tide was ranked No. 2 in the AP poll behind Oklahoma and No. 1 in the UPI poll. A victory over Notre Dame in the Orange Bowl would conceivably launch them past the Sooners in AP poll and confirm their place in the UPI poll.

(Ironically, 1974 was the first year the UPI poll was conducted after the conclusion of the bowl games partially due to the uproar the year prior when the title had gone to Alabama who then fell to Notre Dame in the Sugar Bowl.) 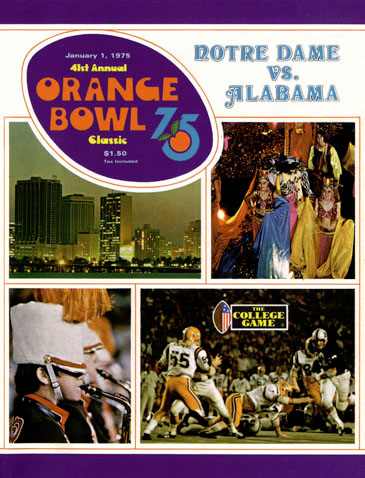 For Notre Dame, the path to Miami had proven difficult and disappointing. Leading up to the season, the defending national champion had been considered a good bet to repeat. But even before the first game Notre Dame's roster was down seven starters due to injury and suspension. It proved to much to overcome.

The Irish lost their Number One ranking with a defeat at the hands of Purdue the third week of the season. They regrouped and recovered down the stretch, succeeding in rising back to fifth in the nation going into the regular season finale against USC.

The Trojans then stunned the Fighting Irish behind the breakout performance of tailback Anthony Davis. Notre Dame gave up a whopping eight touchdowns in just more than a quarter and the Trojans romped to a 55-24 victory. The Irish plummeted to No. 9 in the polls and the lopsidedness of the loss prompted accusations of dissent in the Notre Dame locker room.

Newspaper reports claimed that a factor in the Irish's defeat was racial problems on the Irish squad. The anonymously sourced claims alleged black players were upset with Parseghian and Notre Dame authorities due to an incident the summer prior where several black players were suspended.

Players and coaches vehemently denied the allegations and said the accusations of dissension on the team -- racially based or otherwise -- were unfounded.

"I didn't travel four hour by plane just to lose on purpose," one black player, Eric Penick, about his performance against the Trojans.

The worst shock to the Notre Dame team prior to the trip to Miami came from the head coach himself. Days after the conclusion of the regular season, Parseghian shocked the college football world by announcing he would step down as coach of the Fighting Irish after the bowl game.

After 11 years as head coach in South Bend, Parseghian said the mounting pressures of the job had left him "physically exhausted and emotionally drained." The effect on his health had become impossible to ignore, he said.

"I found myself taking blood pressure pills, sometimes tranquilizers and even sleeping pills on occasion," Parseghian said. "I stepped back and I said that's just not right."

Notre Dame moved quickly to name Green Bay Packers' head coach and general manager, Dan Devine, as Parseghian's successor. The new coaching regime would take over following the No. 8-ranked Irish's appearance in the Orange Bowl against the Crimson Tide.

While the anticipation leading up to the second Alabama vs Notre Dame matchup ever couldn't match the inaugural meeting the year before, there was enough on the line for both teams to make the contest one of the most compelling of the bowl season. The Crimson Tide were playing for a national championship denied them the season prior while the Irish were fighting one last time for the coach who had led them to the title the previous season.

While the title shot was motivation for the Tide players several on the Alabama squad admitted the game was about revenge.

"Losses are not easy to forget and Notre Dame gave us a bad one last year in the Sugar Bowl," said Alabama defensive halfback Alan Pizzitola leading up to the contest. "This game with Notre Dame is something special. It borders on hate. I'm getting emotional about it."

The sellout crowd of more than 80,000 gathered in Miami's Orange Bowl stadium the night of New Year's Day. Almost from the very start, the Alabama team seemed hesitant and mistake prone; the complete opposite of their counterparts on the opposite sideline. Notre Dame may have entered the game a 12.5 point underdog but they certainly didn't play like it.

While happy for the opportunity, Parseghian wasn't willing to leave the outcome to chance alone. The next Notre Dame possession saw the Irish offense devour 77 yards of field possession and more than seven minutes of clock before putting six more points on the scoreboard (the extra point was no good). Alabama did itself no favors with an offsides call during the drive that turned a field goal attempt into a first down conversion. 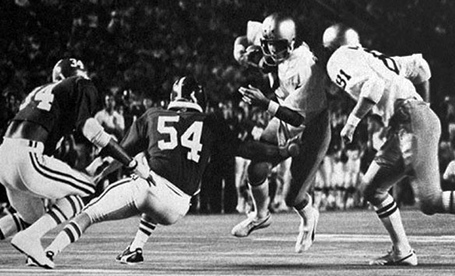 Fate finally seemed to smile on the Crimson Tide when Notre Dame fumbled on their own 32-yard-line late in the second quarter. But Alabama's drive sputtered out at the eight and Bryant had to settle for a field goal. The score at halftime; 13 Notre Dame, Alabama 3.

Coming out of the locker room at halftime, Alabama found the ill luck continued to follow them. Or, at least, the Notre Dame defense continued to play with inspired intensity.

Without an effective running game, Bryant turned to the Tide's passing attack; alternating quarterbacks Richard Todd and Gary Rutledge every other series. Alabama began making progress moving down the field but still produced no points. While the Tide quarterbacks would end up passing for 223 yards on the day, they would only complete just more than half of their combined 29 pass attempts.

Yet Notre Dame found it difficult to reach the end zone as well; failing to tally a single first down in the third stanza of the contest either.

Alabama's first drive of the fourth quarter was quashed when Todd's pass was intercepted at the 10 but the next possession paid off. Todd connected with Russ Schamun for a 48-yard touchdown. With a two point conversion, Alabama cut Notre Dame's lead to just two points with 3:13 left in the game.

The Alabama defense went to work and forced Notre Dame to punt and once again. Getting the ball back the Tide took to air to try in an effort to win the game. This time, it didn't work. On second-and-two at the Irish 38-yard line, Todd rolled out and launched an ill-advised pass that was easily picked off by Notre Dame's Reggie Barnett.

"I had visions of tucking that ball under my arm and sailing downfield for a touchdown," Barnett said afterward. "But when I saw those crimson shirts coming my way I was glad to step out of bounds."

The additional points he hoped for were unnecessary. Notre Dame ran out the final minute on the clock and claimed a second win over the Crimson Tide, 13-11. The victory ended Parseghian's coaching career on a high note. He finished his tenure in South Bend with a 95-17-4 (.836) record and a career record of 170-58-6 (.739).

Alabama concluded the 1974 campaign ranked No. 5 in the nation and Southern California, who had beaten third-ranked Ohio State 18-17 in the Rose Bowl, claimed the AP title. The Orange Bowl loss was the eighth straight year Bryant's team had been unable to claim a victory in the post season.

Notre Dame athletic director Moose Krause told Bryant following the game that "we had all the breaks" but the Tide coach disagreed.

"We were beaten by a superior team. Notre Dame made the big plays while we dropped some passes," he said. "You make your own breaks."